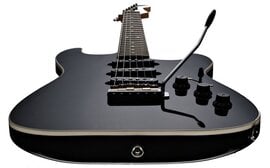 Aerodyne "carved" body
Between 2004 and 2006, Japan brought out a series of Stratocasters with carved body, the Aerodynes, of which at the beginning three models had been made. The first two had a basswood body and Black finish with binding and matching headstock with a silver Fender logo and the written "Aerodyne Strat". Both had the side jack entry, but, while the 2004 model was equipped with a black pickguard, the 2005 one was not. Despite the aggressive appearance, these instruments had a 7.25 inch "vintage" radius fretboard and vintage style tuning machines and bridge, which is why they were described by Fender as a combination of classic and modern: «Aerodyne guitars are beautiful combinations of classic and innovative designs that results in very cool and unique guitars».

​In 2006 it was possible to buy also the​ Aerodyne Classic Stratocaster, whose basswood body had flame maple top with binding, contoured neck plate, mint green pickguard and jack socket on the top of the guitar. It was available in Natural, Crimson Red Transparent and Blue Transparent finishes, all of them with matching headstocks.

Aerodyne Classic Stratocaster, Courtesy of Dave's Guitar
Many years later other models were made, as the ​Aerodyne Medium Scale Strat HSS, available in the Black and Vintage White finishes, with matching headstock, binding on the body and black pickguard, and, above all, characterized by the medium scale (24.75") and a more modern radius (9.5") and equipped with a Dragster humbucker at the bridge, and the ​FSR Aerodyne Stratocaster Koa, whose body in basswood was equipped with a very beautiful top figured in koa and golden hardware.
2019 was instead the year of the ​Limited Edition Aerodyne Classic Stratocaster Flame Maple Top, available in 3-Color Sunburst and Red finishes.

These export instruments must not be confused with the many domestic Aerodyne Strats, intended only for the Japanese market or for some Asian countries, produced for many years by Fender Japan, some of which were medium scale or had a Dragster humbucker, just like the FSR. Some of these domestic models could be easily found also in the American and European stores, even if they were not export instruments.
Antonio Calvosa