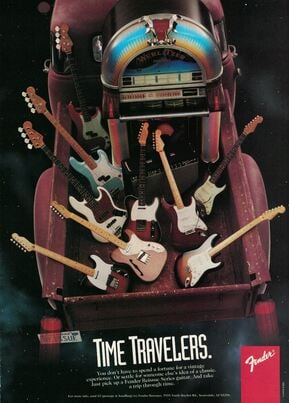 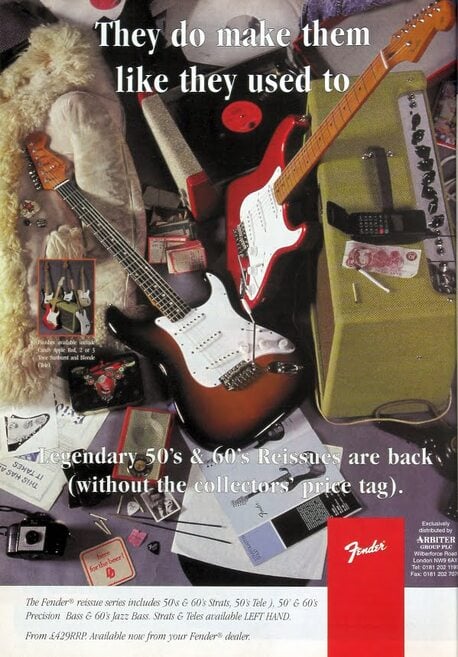 '50s and '60s Reissue MIJ 1995 UK advert
After the transfer of the Squier brand from Japan to Korea, Fender Japan continued to export vintage appearance guitars that, in the beginning, belonged to the Reissue Series or to the Limited Edition Series.  In 1996 they were brought together in the Collectables Series (sometimes called Collectibles).  Qualitatively far different from the JV’s, they were “Fender” guitars, usually with a basswood body and Reissue Strat pickups with staggered Alnico V poles, and, differently from the first American Vintage Stratocasters, were not finished with nitro.  They should not be confused with the many domestic vintages made in Japan, of which there were lots of models with different specs
​The '68 Stratocaster was also called “Hendrix Stratocaster” because of its maple cap and the large headstock with Transition Logo, just like the guitars that Jimi Hendrix often played.  The tuning machines were Gotoh Kluson style, slotted, and it had two wing string trees.  Although the first models had a basswood body, the ash has been used since 1996.  This guitar should not be confused with other domestic Stratocasters, such as the ST68-85TX, whose characteristics were very different: alder body, Texas Special pickups, Vintage “F” tuner machines, black CBS logo and only one string tree.
The 50's Stratocaster and the 60's Stratocaster, made between 1989 and 1998, were guitars with basswood bodies which didn’t reproduce the Stratocasters of a specific year, but expressed the general characteristics of a period.  So they had, respectively, an eight screws pickguard and a fretted maple neck, or an eleven screws pickguard and a rosewood fretboard.
The '72 Stratocaster, made between 1992 and 1996, had a big headstock with the Black CBS Logo and the decal “STRATOCASTER” written in large letters, a bullet truss rod, two butterfly string trees and “G” Gotoh tuning machines.  Available in Natural or Vintage White finish, it had an "F" 3-bolt neck plate with micro tilt.

Given the success of the increasingly aggressive sounds, in 1990 Fender decided to export from Japan a new series of Stratocasters, with classic contour, but “hotter”.  The Hot Rodded Reissue Series Stratocasters, made famous by Richie Sambora, were characterized by the presence of a Di Marzio humbucker with coil tapping at the bridge, twenty-two frets, asymmetric neck plate (strangely, “FENDER U.S.A.” engraved), and a double locking tremolo: at first Kahler Steeler, then Floyd Rose Original. 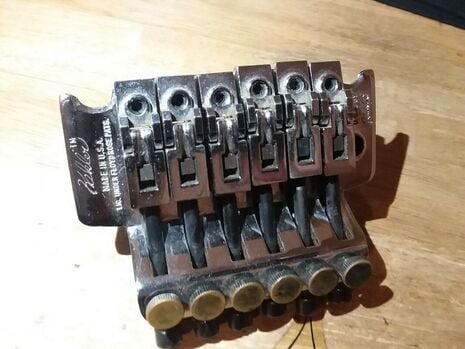 The Kahler Steeler
“The hottest new achievement from the Kahler design team.  This double-locking bridge has the popular feel and appearance of most Floyd Rose licensed bridge systems.  But only Kahler's all steel construction has a pre-stressed harmonically tuned plate, slotted string locks bolts for easy string change, and saddles which are far denser than industry standard.  This creates a stabilized point for the strings to transmit their vibrations clearly through your guitar.  The Steeler!  Can your playing afford to live without it?”, as an advertisement of the time said.
At 1991 NAMM Fender announced that Floyd Rose, the inventor of the locking tremolo system, joined exclusively with Fender, and the Steeler was replaced by the Floyd Rose Original Bridge: “There's a real difference between a tremolo designed by Floyd Rose himself, and the rest.  The most popular tremolo bridge ever created.  Its case-hardened steel construction delivers incredibly full tonal response.”
The series, consisting of the ​HRR '50s Stratocaster (with maple fretboard) and the ​HRR '60s Stratocaster (with rosewood fretboard), remained in production until 1983.

Foto Flame Strat (Courtesy of Stll Kickin Music)
Since 1992 it had been possible to choose, both for the export Collectables and HRR Series and the other guitars intended for Japanese domestic market, the Foto Flame finishes, which represented an attempt to compete with the extremely figurative maple tops that were increasingly fashionable in the 1990s.
Despite many legends, Fender had nothing to do with the development of the Foto Flame process, and no film company, as Kodak or Fujifilm or Polaroid, was involved, because it wasn't a photo!  The only thing Fender did was choose the name Foto Flame, for marketing purposes.
This effect indeed had been developed and patented by Fujigen, which played Fender and Ibanez against each other to get both to order Foto Flame instruments and make the project a success and their investment worthwhile.
The Foto Flame image (and quilt image used by Ibanez, called "gravure") was created digitally and printed on a special heat activated plastic film with something you can refer to as special ink.  A piece of this plastic film with the printed image was laid on top of a body which was placed in a very expensive heated vacuum press.  Everything was vacuumed and heated.  After the correct amount of time the press was opened up and the film removed and thrown away.  The only thing that remained was the microns-thick "ink" print of the flame figure transferred to the body.  After that is was clear coated as normal.  The result was impressive, and it was not always easy to distinguish a foto flame guitars from an instrument with a figured maple top.
It's interesting that Fujigen also was a subcontractor for the auto industry, making the wood panels inside Lexus and Toyota cars (again cars!) so this process had multiple application potential as well. 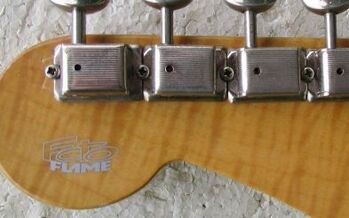 Foto Flame logo
Fender Japan also export another model between 1994 and 1996, the Foto Flame Stratocaster. It was, in essence, a ’60s style reissues, with rosewood fretboard, vintage tremolo and three single coils, and whose alder body had a basswood top.  Foto Flame’s effect was imprinted both on the top of the body and on the neck.  They could be recognized because they had the Foto Flame Logo on the back of the headstock.  They should not be confused with the 50’s and 60’s with the foto flame finishes, as these last had a basswood body and the foto flame finish was applied also on the back of the body, but not on the neck.
A locking tremolo version of the Foto Flame, the Floyd Rose Standard Stratocaster Foto Flame, made between 1992 and 1996, is often confused with the HRR, but can be distinguished from it by its twenty-one frets, only two knobs (volume and tone), the rectangular neck plate (not asymmetric like the HRRs), the "Floyd Rose Squier Series" logo and the Floyd Rose II bridge. ​
Unfortunately foto flame finishes experienced some problems over the years.  Fujigen did extensive testing to check everything, because this whole idea and process had never been done before and there was nothing to get any experience from previous work.  But one thing they couldn't check was the time.  Some foto finish guitar today shows some characteristic cracks on the finish, probably because there was something in the ink print material that was not completely compatible with the poly finish. Something that has taken years to show up.  There is another problem as well: the beautiful blue sunburst color often turns a strange green color.
Antonio Calvosa
​