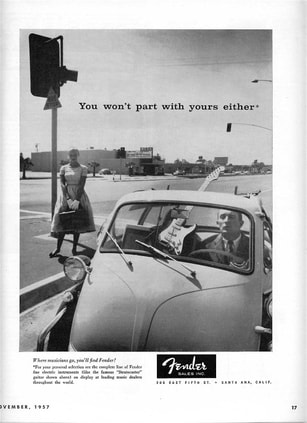 In this post, we take a look at some of the best Stratocaster advertisements of all time. From the classic “black and white” ads of the 1950s and 1960s, to the more modern and colorful ads of the 1980s and 1990s, these ads showcase the Stratocaster in all its glory.

"You won't part with yours either" Series by Bob Perine

The success of the Fender brand was determined by several factors: the undisputed quality of his instruments, a valid and large distribution/sale network, and, above all, a series of innovative advertising campaigns and elegant catalogs - in comparison, those of the competitors in the early 1950s were dull, conservative and insignificant. The new entry Fender could afford more audacious and colorful ads. In a period in which musical instrument companies aimed at austerity, the campaign started in 1957 by the agency Perine/Jacoby in Los Angeles, centered on the young, creative and progressive nature of its instruments, was a great success. Bob Perine immediately identified the segment of the population to which the ads were to be destined and proposed the slogan "You won't part with yours either", largely used in the 50s and 60s and rediscovered many years later.

"Wherever you go, you'll find Fender" by Dave Mullen

Similar to Bob Perine's historic "You won't part with yours either", these new Fender Ads were developed by Dave Mullen in 2006.

The sounds that create legends

"The sound that creates legends" motto appeared for the fist time in conjunction with the presentation of the Vintage Series in 1982. In 1998 Fender "reissued" it for a series of ads made as a tribute to four guitarists who achieved success with their Stratocasters: Jimi Hendrix, Stevie Ray Vaughan, Eric Clapton and Jeff Beck.

From the 80s onwards, new, very colorful advertisements appeared on Frontlines or other magazines, depicting famous guitarists holding their signature or another Stratocasters.

Often Fender exalted its history or the characters and tools that made it famous. In addition to the adverts obviously concerned to Leo Fender or to the musicians who used these guitars, one from 1967 stands out, in the CBS era, in which a Fender employee climbs on a neck suspended between two boxes with the motto "We stand on our reputation". In fact, it refers to a famous photo (click on the AD to see it) in which Leo, probably around 1950, asked a Fender employee to stand on an Esquire neck without truss rod, to demonstrate the hardiness of his maple necks and above all the uselessness of the truss rods in his guitars! In fact, the first Esquire (with one or two pickups) of the early 1950s came out without a truss rod which then appeared during the summer of the same year when Leo was convinced that it was necessary to obtain a perfect and long-lasting setup of the neck...

In the 70s, the Fender led by CBS inaugurated a series of very colorful advertisements with very immediate mottos, and another evidently inspired by Disney.

Other pre-CBS Fender ads and the letter to dealers

The first leaflets depicting the Stratocaster were printed in April: the new guitar was showed for the first time in the May edition of the International Musician. In a letter to the dealers Fender stated that it was ready to supply them as early as April 15th.

Since its inception, the American Standard Stratocaster has been associated with the American flag to mark its origin. "Born in the USA", "Make the history", "Still the one" are among the mottos most used by Fender in its advertisements. 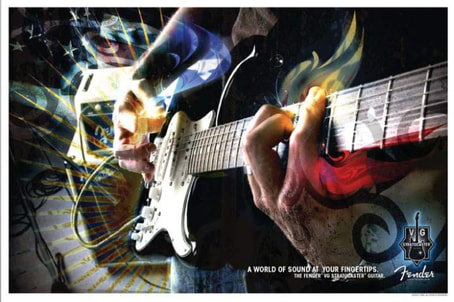 The very first Stratocaster advertisements showed the image of their endorsers. But it was not just a habit of the early Fender years: even later, Fender took advantage of the success of the guitarists who played his guitars, including Jimi Hendrix.
Mary Kaye, nicknamed the first woman of rock'n'roll, posed in 1956 for Fender catalog with a blonde Stratocaster with the gold-plated hardware passed into history with her name. Kaye, in reality, didn’t play the Stratocaster in that period: she’d only used it for few minutes for the 1956 Cha-Cha Cha Boom! making and for the advertising strongly wanted by Don Randall. 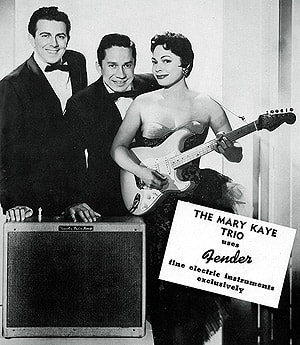 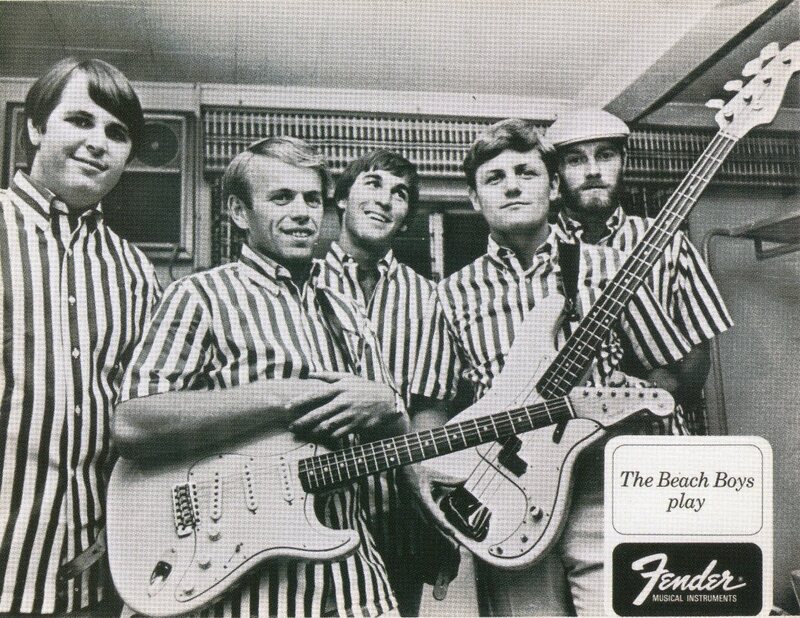 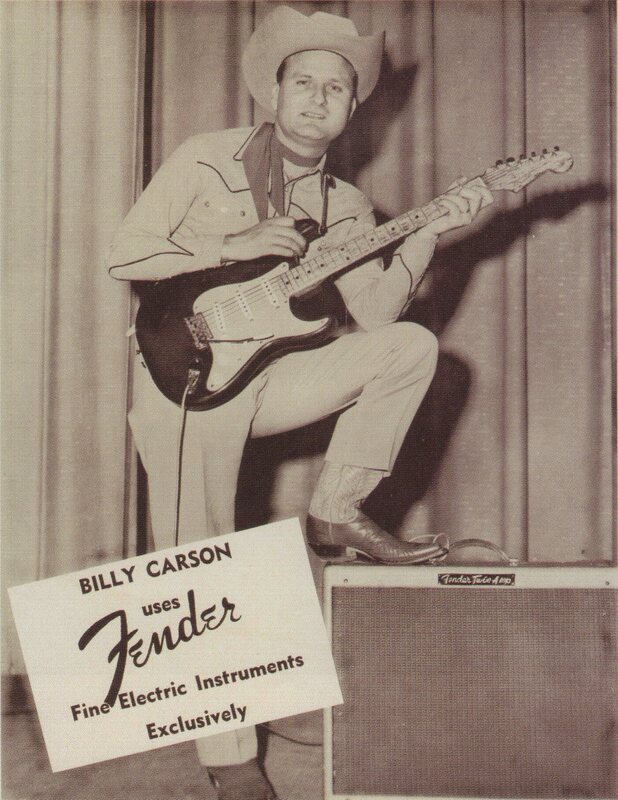 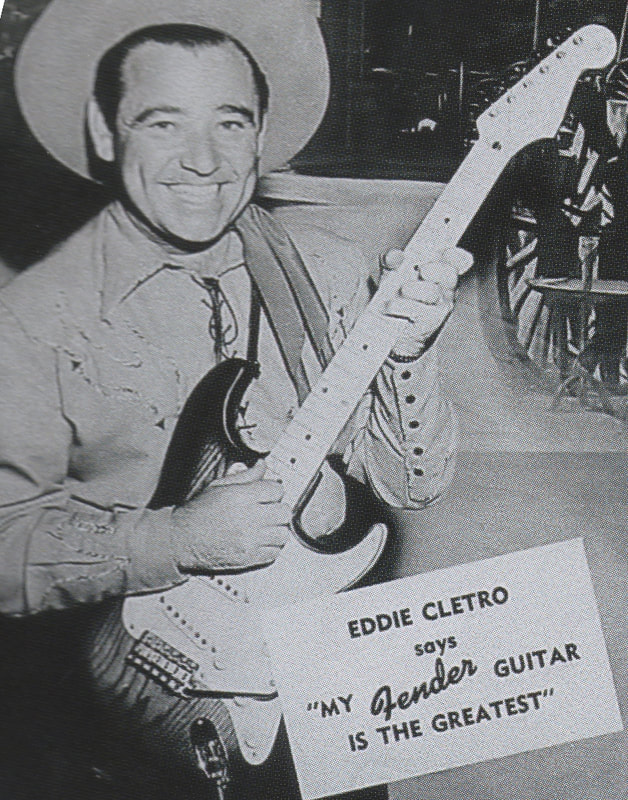 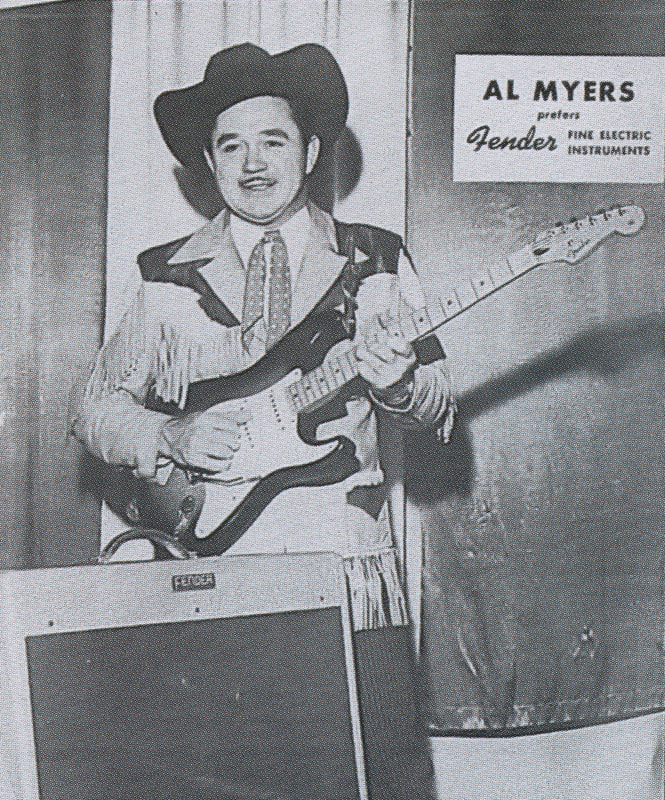 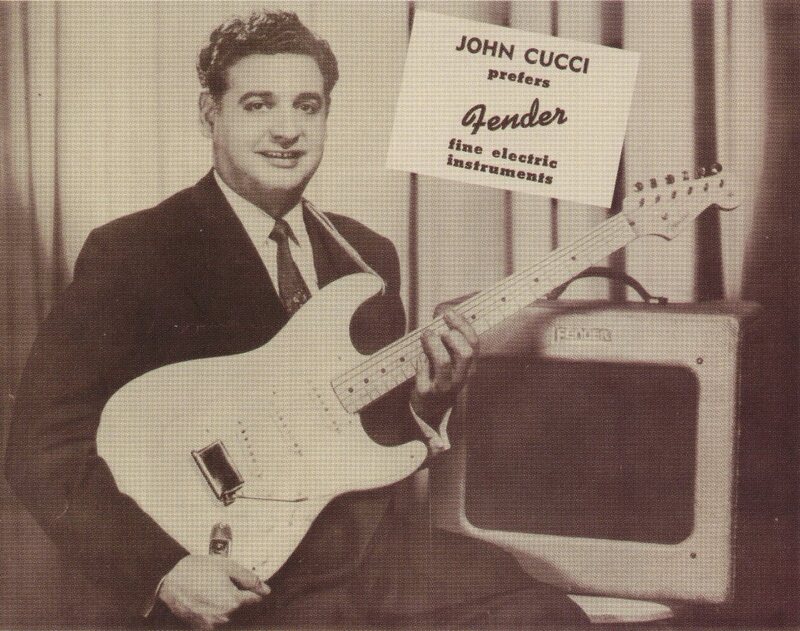 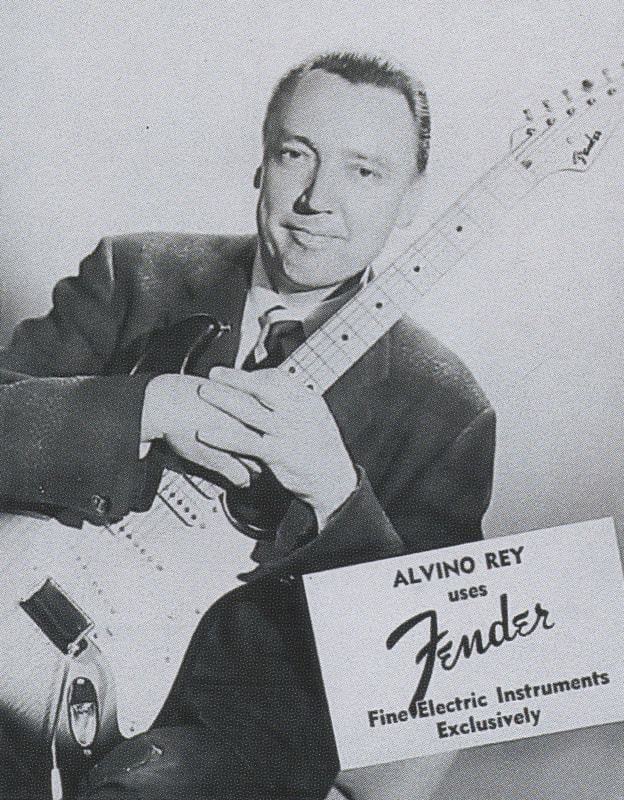 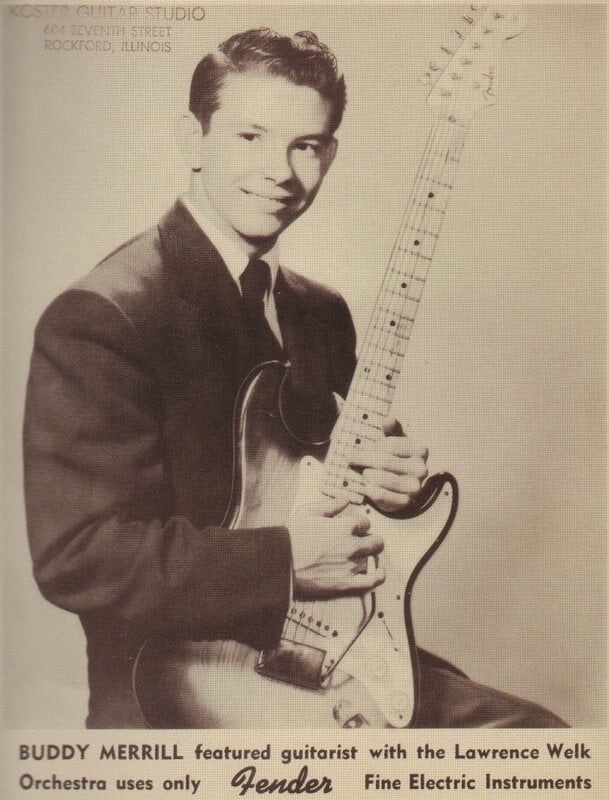 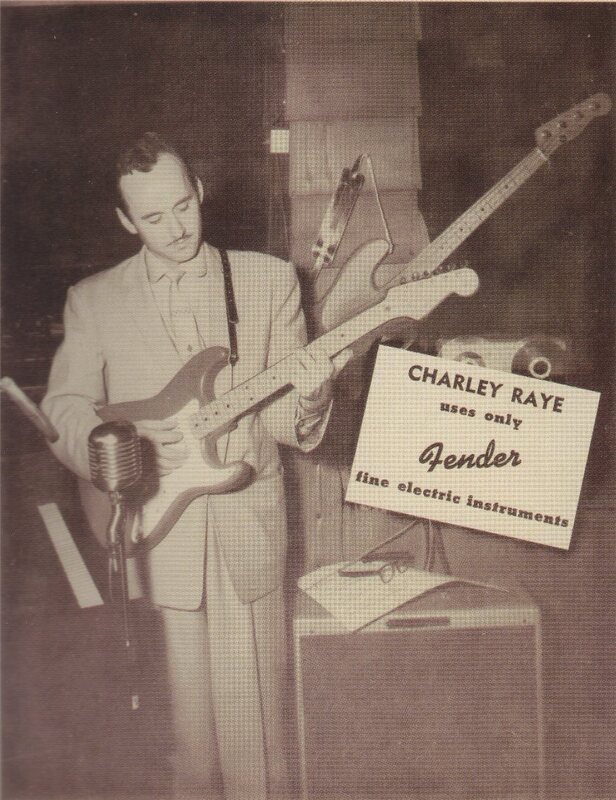 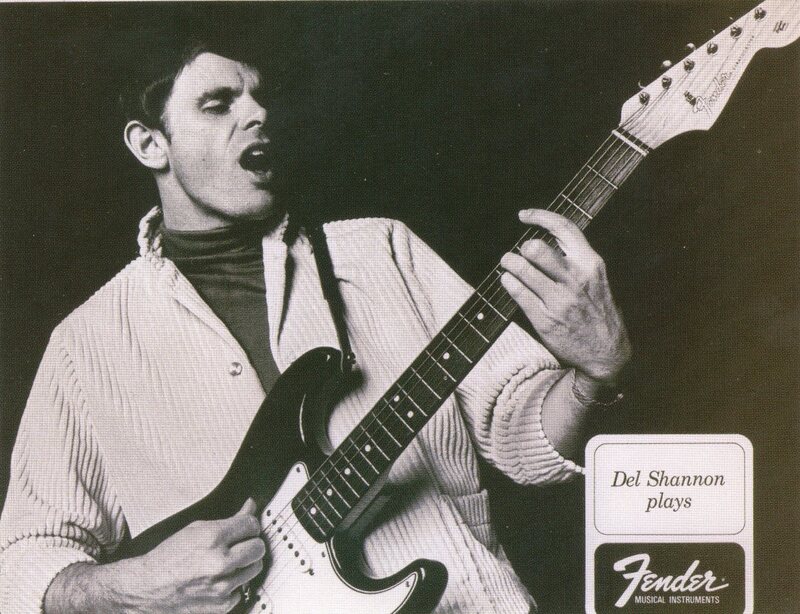 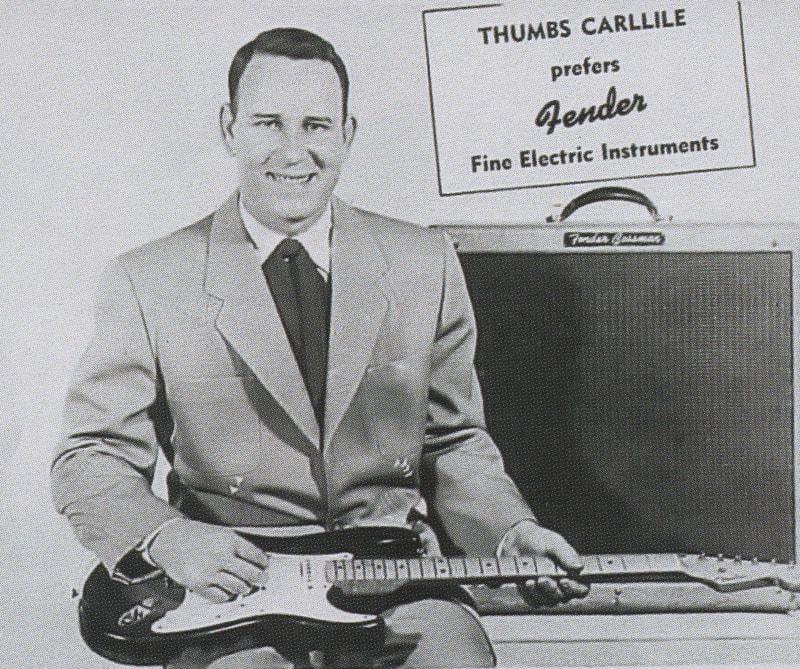 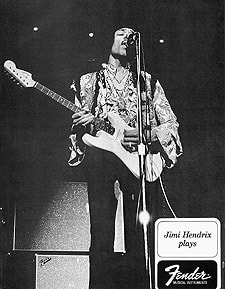 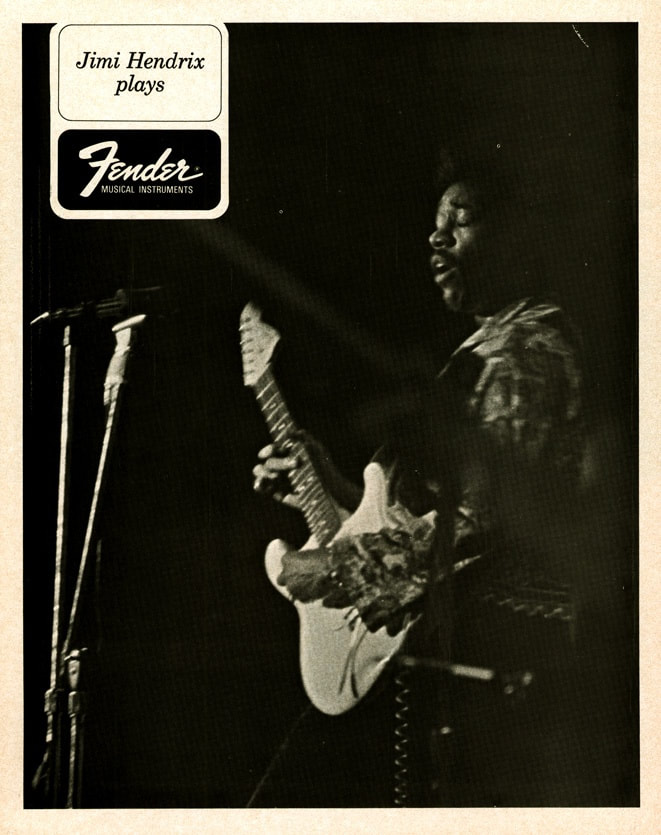