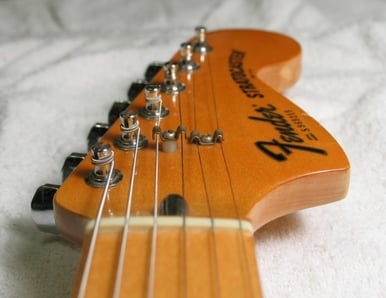 The string trees, also called string retainers or string guides, were widely used in Fender Stratocasters to improve the strings tension at the nut and obtain a better sustain.
Since 1954 to the second half of 1956 a circular string tree, called button or circular string tree, had been used: it lowered the string of E and that of B; later, it was replaced by that butterfly-shaped, called wing or butterfly string tree.
In 1959, with the slab board, Fender added to this string tree a brass spacer, which in mid-1964 was replaced by an ABS plastic one.
In late 1971 on the large CBS headstock was used a second butterfly string tree, for the strings of G and D. However it is possible to find Stratocasters with only one string tree also in 1972.
In the second half of 1983 the Standard Stratocasters and the Elites (and later also the American Standards) were equipped with the new Ezy Glider, in rolled steel, on which there were some slots to permit a better strings vibration.
Over the years, Fender has also used other types of string trees, like the black roller or single bar string guide, used on many made in Japan models, or roller nut, string clamp and locking nut, which made their use superfluous.