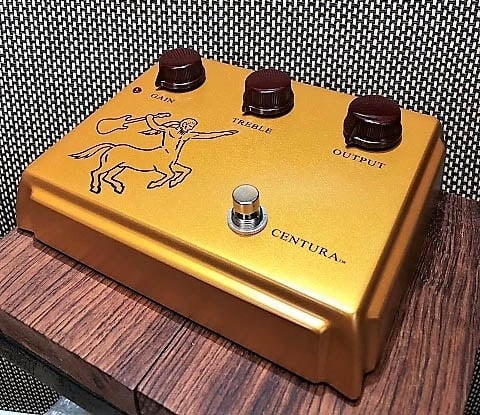 THE KLON CENTAUR: A BRIEF HISTORY

The Klon Centaur was one of the first “boutique” overdrive pedals. Introduced in 1994, it was designed by Bill Finnegan over a period of four years.
The pedal was the result of Bill’s quest to create a pedal that would recreate the harmonically rich distortion of a guitar amplifier at a high volume, because the ubiquitous Tube Screamer’s midrange hump and spongy response just weren’t for him.  In fact, he wanted an overdrive that would work with the guitar and the amp, and with the particular sound they created, rather than one that imposed its own sound.  As the popularity and demand of this pedal grew, Bill could never build enough to satisfy demand.
The scarcity of supply (5,400 were produced) meant that they soon began to skyrocket on the used market.  Originally priced at 225 dollars in 1994, and 329 dollars in 2009, when it was discontinued, the Klon Centaur at the time of writing sells for 5,000 – 6,000 dollars.  This has spawned a whole host of “clones of the Klon”.
However, since the original circuit board was coated in epoxy to keep others from reverse-engineering it, it took a while for the circuit to be analyzed.
Today numerous builders offers their own versions of the Centaur and the Centura by Ceriatone is probably the most accurate.

THE CENTURA: PROBABLY THE BEST CLONE?

It’s perfect for helping a single-note solo cut through a loud band without mutilating the guitar’s innate tone.  What a contrast with all those high-gain pedals that sound huge in isolation but disappear onstage!
Controls include Gain, Treble, and Output.  With the Gain control at minimum and the Treble and Output controls set at “unity tone” (about 11.30 o'clock), you can get a clean boost, which allows you to hit the first preamp tube in your amp harder, maintaining the tonal qualities of your rig and making things louder without adding distortion, but with a bigger, fuller sound.  It sure made my Stratocaster and my Super Reverb Amp sound huge.  Also, at this setting and by increasing the output of the Centura a little higher than the straight amp, I could get a nice full clean solo sound with a more “up front” quality to it.  With the volume turned all the way up, the pedal significantly increases the volume without driving the amp into uncontrollable feedback.  The Centura can boost the signal considerably, enabling a guitar with wimpy pickups or a weak sounding-amp to sing with authority.
As you turn up the gain, you get more distortion.  Overdriven tones are thoroughly naturalistic, with sweet highs, lots of low-end girth, and a bit of midrange pointiness.  The Treble control effectively helps compensate for the roll off of high frequencies that typically occurs as more Gain is directed to the amp, and at 11, Treble is unaltered from the levels selected for your guitar and amp.
Just plug a Les Paul into a Marshall tube amp with the Centura as the kicker to push the crunch tones over the top.  Do you remember the famous riff played by Slash on Always on the Run?  With the Centura you’ll get that tone.
Equally impressive is how the sound cleans up when you back off the instrument's volume and retains its full tonal spectrum.
Every unit is hand-built in Ceriatone Amplification’s workshop in Kuala Lumpur, Malaysia, where, since 2006, the founder Nik Azam has been producing entirely hand-built high-quality amps and pedals, backed by cutting-edge design prowess, to compete with just about any of the boutique makers of the world.
The Ceriatone Centura is housed in an oversize sandcast aluminum chassis available in matt gold, matt silver, black, purple or raw, with an off-center led and widely-spaced retro-vibe control knobs that you can adjust with your foot onstage.  The pedal can be powered by an internal 9v battery, or by an external 9v DC wall power supply.
In conclusion, the Centura is a meticulously crafted, fat-sounding pedal that will give any guitarist the retro sound that so many players crave these days.​
​