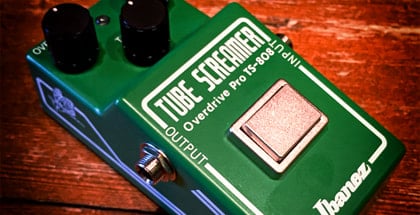 The Ibanez Tube Screamer Overdrive Pro TS808 was released in 1979 and was replaced in 1982 by the TS9 Tube Screamer. Designed by Mr. Susumu Tamura, the TS-808 was manufactured by Maxon and sold by Ibanez, and gathered much of its acclaim for being the overdrive of choice for Stevie Ray Vaughan.
It was the one of the first stomp-boxes designed specifically to mimic the sound of a tube amp running at full tilt. This was quite a revolutionary concept at the time, and it continues to influence the development of guitar effects even today. Real tube screamers nerds love to go back and forth about the finer points of every Tube Screamer variation, but the fact is most of them sound pretty much the same. Today Ibanez makes many excellent versions, including reissues, hand wired, mini and bass models.
Ibanez, owned by Hoshino Gakki Ten, started selling guitar effect pedals in 1974, after reaching an agreement with the Nisshin Onpa Factory, owner of the Maxon brand, to market and distribute their products outside of Japan.
Between 1974 and 1979, two overdrive pedals were already listed in the Ibanez catalog, the OD-850 Overdrive and the OD-855 Overdrive II, but in sound and circuitry these devices more closely resembled fuzz boxes than the smooth, mid-heavy saturation that the Tube Screamer generates.
Part of the mojo of the Ibanez TS808 tone is strongly linked with the JRC4558D dual op-amp, made in Japan by the Japan Radio Company, that were eventually replaced by the RC4558P, a cheaper Malaysian version produced by Texas Instruments, which is thought to be responsible for a slightly grittier sound than the JRC op-amp. There were also a third chip which was rarely used in the original TS-808, the TL4558P. These chip all were of the general 4558 type, which is a fairly standard dual operational amplifier, but from different manufacturers. The use of different op-amp was probably due to cost and availability at the time.
During the time the Ibanez Tube Screamer TS808 was in production, the JRC was one of the cheapest dual op-amps on the market with acceptable audio performance. As such, it was used in huge volumes of Japanese audio equipment. This chip were described in some Japan Radio Corporation literature as “an improved dual 741 type op-amp with better noise, drive capability, and slew rate than the original 741 type op-amps.”
​

​Other series (and other tube screamers) were later released by Ibanez, but they had not the same success of the first “0-Series” and “9-Series”, like the “Master Series”, the “Power Series”, the “5 Series”, or the “Tone-Lok Series”.
​

But why did Ibanez replace the strong selling TS-808 after only two years of production? It seems that that the square foot switches were no longer available by the time the supplier ceased production. According to Tone Home, this could explain why Ibanez, when giving thought to a classical Tube Screamer reissue in the early ‘90s, reissued the less sought after TS9 and not the original TS-808. When Ibanez finally found a source for square footswitches in early 2004, the TS-808 reissue was released. According to Analogman, the TS-808 reissue uses the new reissue board introduced in 2002, made by Ibanez, not the older, slightly better quality Maxon board used in the original TS808 and pre-2002 TS9. It features the JRC4558D chip and the correct output resistors, so it sounds better than the TS9 reissue, and is “CE” marked.
In 2014 Ibanez reissued also the earliest narrow box TS-808 as the 35th Anniversary TS-808, which was a very accurate reissue except they used JRC4558D chips instead of the 1458 chips.