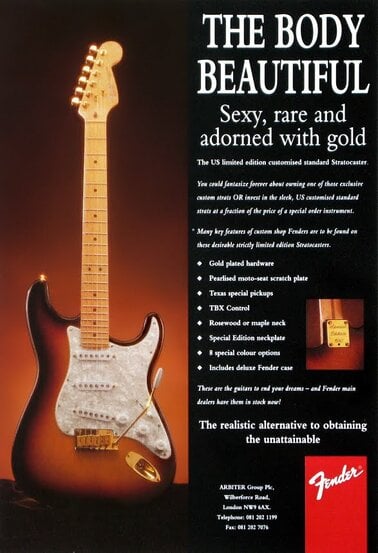 There is much confusion over the term FSR, which stands for "Fender Special Run", and indicates all those guitars commissioned by specific dealers or limited editions hardly included in the catalogs.  They are factory guitars, made in USA or in other countries, available only for one year or for a very short time.
Because they are produced at the request of dealers, many people refer to FSR as meaning “Factory Special Request”.  But, according to Fender's website, the correct terminology is Fender Special Run.
They are often reinterpretations of “normal” factory strats from which they differ only in small details, such as the finish, the hardware or for the use of special pickups, but sometimes differ a lot from the guitars in the catalog: there are FSRs that feature exotic woods, fretboards with binding or top with special designs, just to give some examples.
Maybe we can consider the Special Editions of 1993 and 1994 the first examples of FSR (even if Fender still did not use this name).  After those, the term “Special Edition” was frequently used to indicate factory guitars out of catalog.
However, after 2015, when Fender took direct control of the distribution of its made in Japan instruments, the term FSR was expanded and now includes all those guitars made in Japan, intended only for the domestic market, but available for a limited time, as limited edition,  in Europe and the United States.
Adding some Japanese Stratocasters to FSRs was a clever marketing move, as Andy Mooney, CEO Fender, said in 2019 in an interview with Craig Campbell: “There are some people who just like Japanese guitars because they're Japanese, and you know, I want a Japanese Fender in my collection because I've got all these other guitars.”  In addition, many guitarists want a unique, special guitar: “Well, the trick with limited-edition is keeping it limited. [...] One of the things I learned in my Nike days is that the higher the market share, the more this necessity to create a broader range of products, so people can access the brand but still feel different. You know, everybody wants to be the same, and everybody wants to be different.”
​

The Special Editions of 1993 and 1994 were probably the first case, for Fender, of limited edition factory guitars.  They were very similar to the American Standard Stratocasters, but differed in the neck plate bearing the "Special Edition 1993" (or "Special Edition 1994") engraving and in the Texas Special pickups. They both had pearloid pickguard and special finishes.
In 1997 Fender produced 1997 units of the​ Collector's Edition Stratocaster.  This guitar featured Texas Special pickups, vintage style bridge, brown shell pickguard, gold hardware, and a special inlay at the 12th fret.