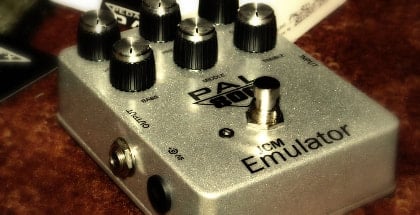 Review by David Pakula (Tone Report)
The Emulator can be powered by a nine-volt battery in addition to DC adapter. The DC jock is on the left side of the pedal next to the output jack, so you may find that your power cable and your signal cable are in dose proximity depending on how your pedals and power supply(s) ere situated. The input jack is in the typical position on the right side of the pedal.
And, then, there is the “secret weapon.” If you open the pedal, you'll find a hand-assembled electronics board with trimpots that have been carefully set at the factory and locked into position. There is one, however, that remains adjustable for the user, called Master Tone. While that adjustment is set to a factory specification, it can be altered to add or remove some of high end.
Plugging this pedal directly into a power amp and using the pedal as the preamp revealed a deep, spongy tone, reminiscent of classic tube amp sound. It offered some furry gain, and what felt like along slew rate found in early British tube amp designs. The preamp controls allowed for vintage tones up through high-gain sounds. Once in front of an amp and run through a clean channel, the traits of the pedal were similar. It offered the long slew rate response and heavy fur on the higher gain settings. Dialing the Gain back to about 9 o’clock offered some truly convincing vintage sounds.
Using what is normally my dean tone EQ on the amp channel, I was able to do some additional shaping, but the EQ section on the pedal is quite responsive. I found no need to access the aforementioned Master Tone to allow for the maximum high end, as the Treble and Presence controls were more than adequate.
​
WHAT WE LIKE
The PAL 800 JCM Emulator is a rugged, no-nonsense, well-constructed pedal. It is assembled with care and achieves a wide array of sounds from the early tube amp attempts to internally overdrive a preamp section, to some of the higher gain amps of the ‘80s and ‘90s.
The Master Tone control as & user-adjustable setting within the pedal is a nice feature.

CONCERNS
The PAL 800 JCM Emulator requires unscrewing the bottom cover to access the battery and the Master Tone control. The DC power supply jack is near the signal output, so careful cable routing may be required.

​NOTES BY EDITOR
This Pedal does its best when used with a Les Paul and a Marshall Amp.