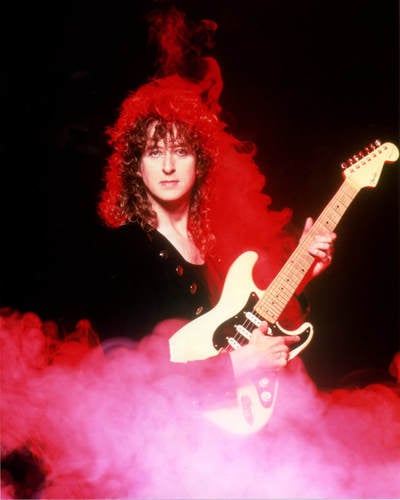 Alex Gregory and his third prototype (alexgregory.net)
Alex Gregory is a multi-instrumentalist who was awarded the title "Maestro" by the British government in 1983.  Graduated from the Milan Conservatory, despite his classical education he loved modern musicians like Ritchie Blackmore, Jan Akkerman and Allan Holdsworth: “I grew up on classical music, but I had uncles in rock bands with red Stratocaster guitars.  One of them even played an electric mandolin.  I was corrupted from day one.  I freaked out when I heard Ritchie Blackmore, and hanging around with Allan Holdsworth as a teenager was the final straw,” Alex remembers.
But he is not only a renowned musician.  In fact, thanks to a couple of patents, the first seven string Fender electric guitar is due to him.  The idea came to him as he wanted an electric guitar with which offered the opportunity to play both aggressive power chords and melodies born for the violin, which has a greater extension.  Moreover he wanted the twenty-fourth fret to play the intro of Capriccio n.5 in A minor by Paganini.  “By the time I was at college studying orchestration, I had already devised the concept of a 24-fret seven-string guitar with a top A string.  In my mind, that was the instrument I needed to play my favorite romantic violin parts with a rock sound.  It’s lucky that I didn’t live in the Middle Ages - back then I would have been burned alive for thinking such impure thoughts!”, he joked.
It seems that Gibson was also interested in the marketing of the Alex Gregory model; however, he chose Fender for its realization.
A couple of prototypes were presented at the Anaheim NAMM, in January 1988, and two models, the Alex Gregory Ultra 7-string Stratocaster and the Alex Gregory Elite 7-string Stratocaster entered the catalog in 1988 as the third Fender signatures, after the Clapton and the Malmsteen.  However, the guitar never entered large-scale production, with the exception of Custom Shop replicas made many years later.
The Ultra version featured a scalloped ebony fretboard, highly figured maple neck and body and gold plated hardware; the Elite sported a rosewood fretboard and chrome hardware.  They both had twenty-four frets, 25.5" scale length, and three Fender Lace Sensors.  The neck featured a very pronounced tapering: the ratio between the width at the last fret and that at the nut was greater than that of the Stratocasters of the time, so as to guarantee a better comfort.
The critical issues inherent the seven string were due mostly to the sustain loss on the additional A string, the thinnest of all.  In order to overcome this problem Alex conceived a new bridge and tuning machines with different heights.  The bridge, reminiscent of the vintage style one, wasn’t fixed to the body with six screws, but through two outermost screws, well anchored to the body, which were named “fixing screws”, and through two others, the internal ones, named “stabilizing screws”, which were left less tight; the saddles were as high as possible.  This kind of bridge aimed to guarantee the maximum transmission of vibrations from the strings to the body for a better sustain. 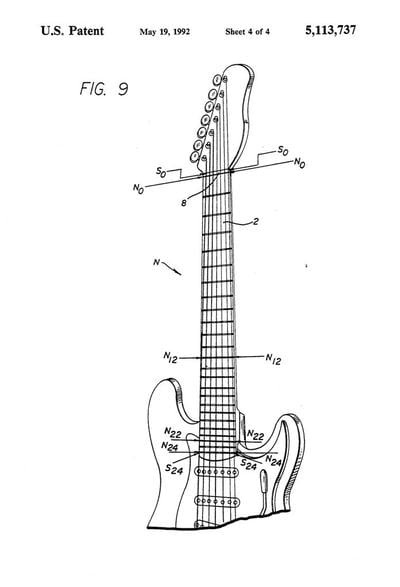 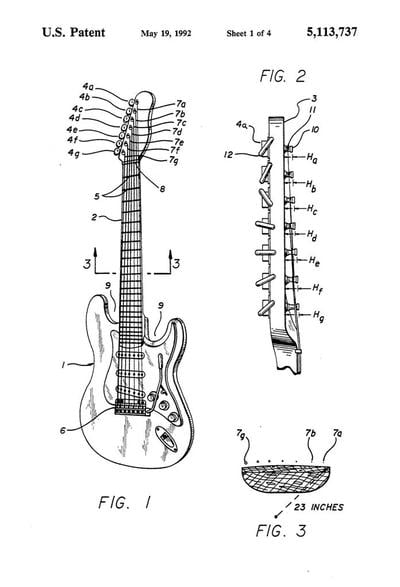 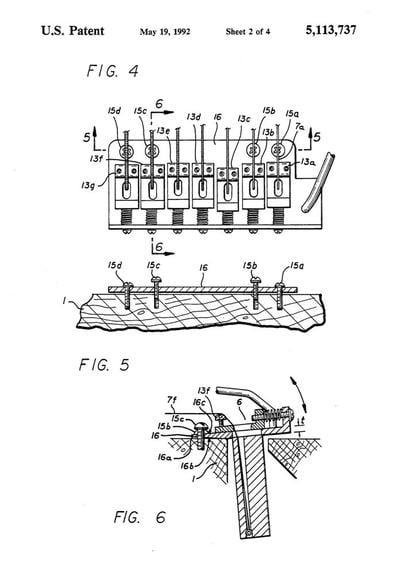 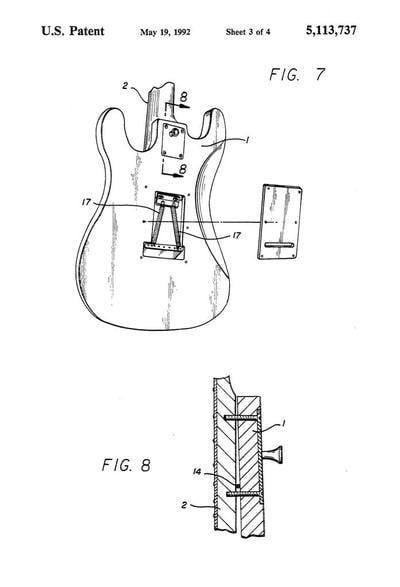 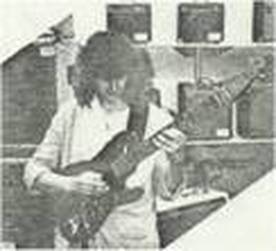 Alex Gregory and his first prototype (Strat-central.net)
The prototypes exhibited at NAMM in 1988 were slightly different: 25" scale length and reverse headstock.  The first one featured a scalloped ebony fretboard, a one-piece quilted maple body with a burgundy see-through finish, three Seymour Duncan pickups with eight exposed poles and gold hardware.
The second featured an UN-scalloped Brazilian rosewood fretboard, a one-piece swamp ash body with a peach pearl finish, and nickel hardware.
A third prototype featured a 25.5 "scale, a regular headstock (as opposed to a reverse one), staggered tuning machines, a one-piece maple neck, a one-piece swamp ash body with a blonde finish, and three Seymour Duncan 7 string alnico V stack pickups with cream bobbins.  This was the perfect prototype, but in the end his signature was never launched. ​
​
Between 2001 and 2003 Fender proposed again some models of the Limited Edition Alex Gregory 7 String Stratocaster, all different from each other and made by the Custom Shop under George Blanda’s supervision, featuring the guitarist’s signature on the back of the headstock.
Antonio Calvosa
The Custom Shop Alex Gregory 7 String replica (gbase.com)