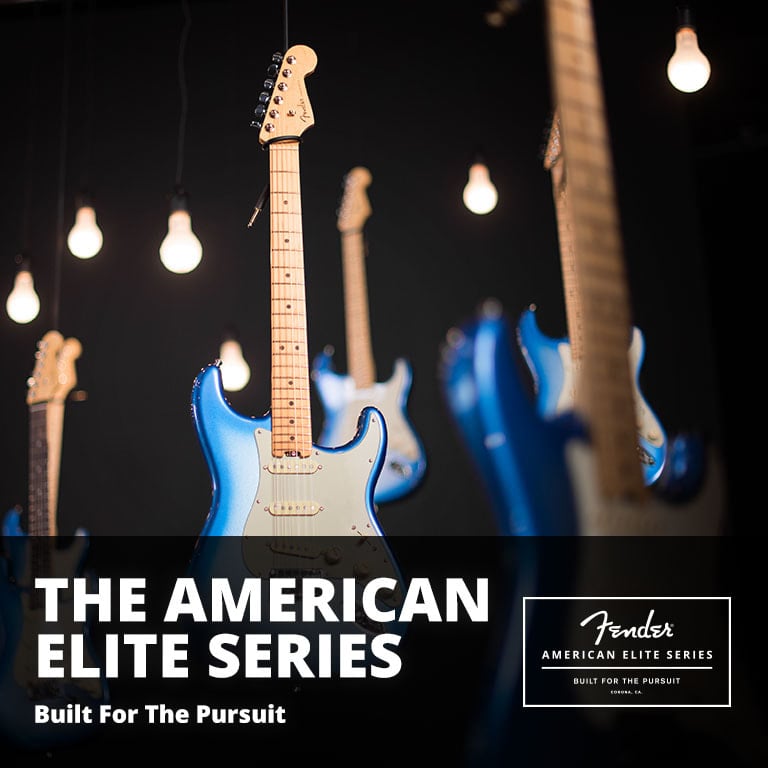 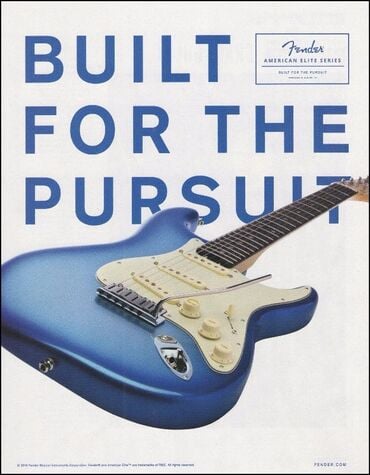 American Elite Stratocaster advert, 2016
The American Elite Series was presented at the winter NAMM of 2016: it took the place of the glorious American Deluxe Series.  Born as a line of high profile guitars, the ​American Elite Stratocaster were built perpetuating the design of the most famous guitar of all time.  At the same time they represented Fender's commitment to innovation, as Richard McDonald, Fender Executive VP and marketing Senior VP, stated: “The American Elite Series is our most progressive and advanced series of electric guitars to date.  We spent two years refining every detail to give modern players the tools they need to excel and write the future of music.”  This new series met the demands of the most modern guitarists, at the launch price of around 2000 euros, much higher than that of the American Standards.
But what did these new Stratocasters have which was different?  The innovative 4th Generation Noiseless pickups, available only on this series, in Alnico V, and which represented for Fender a significant leap forward in the design of single coil without hum.  They combined the vintage-style sound of the old Stratocasters with a quietness never heard before, allowingbright and defined sounds without losing anything with overdrive.
The body shapes were comfortable (the contour had been emphasized for greater ease), which you could immediately notice holding the guitars.  The neck too, which passed from the “C” to the “D” profile, was very comfortable, and the compound radius of the fretboard ranged from 9.5" to 14".  The neck heel was asymmetrical and a new type of truss rod, double action with roller, to simplify adjustment, had been applied for the first time on a Fender of this series.  The two pivot bridge had a high-mass copper infused block and a pop-in arm and all the locking tuning machines had short posts, providing a better angle to the nut.
These guitars were available in a wide range of finishes including the new Autumn Blaze Metallic and Sky Burst Metallic.
In addition to the basic version, the left handed version and a model which matched a Shawbucker humbucker with the Noiseless, the ​American Elite Stratocaster HSS Shawbucker, on which there was a switch that excluded the tone and volume circuits, were proposed.
These new Stratocasters were sold in the elegant ABS Elite Molded Case.
Antonio Calvosa