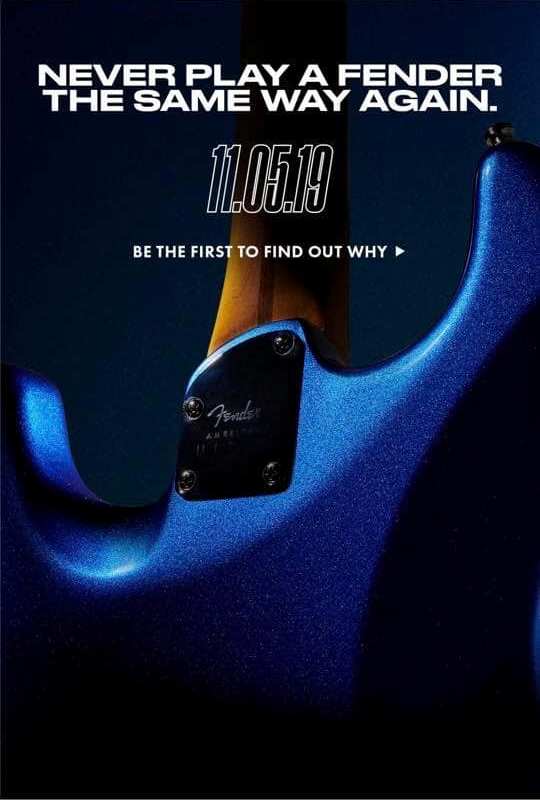 Justin Norvell, EVP of Product, suggested this was an instrument for people who played guitar a lot and needed enhanced tonal versatility and comfort from their Fender. “The evolution of this series was something that took several years.  We really look at every component, what has an impact to tone, every piece of that system.  It's not just the sum of its parts.  It's the way all of those parts work together that make that final instrument, and the way that it resonates that makes something magic.  The goal with the Ultra series is to create an instrument of immediate and maximum inspiration, making the guitar not be in the way.  The American Ultra Series is our most advanced series of guitars and basses for discerning players who demand the ultimate playing experience in precision, performance and tone.  Blending state-of-the-art engineering and nuanced design to provide a high-performance experience for today’s player, American Ultra is the next chapter in Fender’s legacy of cutting-edge innovation.  American Ultra has truly been decades in the making and is a result of our tireless commitment to meet the needs of today’s working and touring guitar players looking for a modern feel and tone.”
The goal was to innovate while protecting the very things people loved about its instruments.  Luxurious, sleek and cutting-edge, this series offered a revised body design and contours - a pivotal moment in Fender history, decades since the introduction of the Stratocaster's comfort contour body.  New back body curves offered hours of gigging comfort while a super-sculpted neck heel gave players unparalleled access to the upper register of the fingerboard, resulting in better accessibility and comfort.  These new contours are not only comfortable, but they gave the body a sleek and attractive look as well.  A fresh hot-rodded take on classic outlines.
Justin Norvell: “These instruments are super contemporary, in the fact that they are manufactured in a way that probably couldn't have even happened back then.  It represents the height of our precision that we're working with here.  Manufacturing techniques have evolved, and tolerance has gotten tighter with CNC manufacturing.  The idea of modifying the body shapes is not one that we take lightly.  The body of the Stratocaster and Telecaster hasn't really manifestly been modified or changed in over 30 years.  And you've got to retain the essence and the spirit of the original mission of the instruments.  You can look at it from the front and say, that's a Stratocaster or that's a Telecaster.  The back, where it actually is worn against your body, where your hands do go when you go up high on the neck, that's kind of the real estate that we chose to make some of those modifications.  So all the sculpting and the contours that we did to these instruments make it even more ergonomic, and more sculpted, and allows you to get up in the higher access a lot easier.”
The American Ultra Stratocaster featured the brand-new Ultra Noiseless Vintage single coil pickups, which delivered authentic Fender single-coil sound without hum.  In addition, S-1 switch added the neck pickup in to any switch position.

2019 American Ultra Stratocaster advert
The American Ultra HSS Stratocaster featured the Ultra Noiseless Hot single coil pickups, which offered modern performance and classic tone, and the new Double Tap Humbucker.  S-1 switch split the humbucking pickup into a full-throated single-coil, perfectly calibrated with the neck and middle pickups, thanks to one overwound coil.  “Another thing that we have on the humbucking instruments is the double tap, that enables you to get a real single coil sound when you split the coil.  A lot of people with a humbucking pickup like to be able to split the coil. But when you do, you actually have a very weak single coil.  So what the double tap does is it actually boosts the coil to be a full-sized single coil when you're in single coil mode,” said Justin.
These pickups had more contemporary fullness to their punch that made them ideal for rockier, less bluesy territory too.  “Noiseless pickups have been something that we've been working on for over 20 years.  We've gone through five generations now of those pickups.  And every time we go through a generation we learn a lot.  And there are a lot of generations between the generations that don't even see the light of day,” said Justin.

2019 American Ultra Stratocaster HSS advert
The volume control had a treble bleed capacitor to preserve high-end response at any volume.  Fender also included a tactile soft touch rubber edges to the knobs.
The all-new Modern “D” neck - this was the only Stratocaster that had it - with a speedy 10”- 14” compound radius and extremely rolled edges made the neck ergonomic and comfortable, perfect for everything from effortless string-bends to silky runs.
American Ultra Stratocaster also featured locking tuning machines for increased tuning stability.
These guitars are available in a variety of colors, including Cobra Blue, Mocha Burst, Texas Tea, Arctic Pearl, Aged Natural, Plasma Red Burst and Ultraburst.
“Here in the Corona Factory, these instruments are still completely handmade.  There are 150 hand processes.  And in those hand processes, we are not assembling parts that we get from other places and just merely putting them together.  Everything is made here.  So in addition to the necks, the bodies, we're stamping the pick guards, were stamping the jack ferrules, were making the bridge components, where every screw, every spring, hand polishing the saddles, et cetera,” said Justin Norvell.  “It is an interesting juxtaposition to see us stamping out an Ultra neck plate on the original machines next to the tools with 1957 dates on them.  Even these new components that we're making are still coming off of the original equipment and being made in the same way that they were back then.  So it's a really nice through line of that evolution that you really are still getting the original vintage Fender mojo, just reinterpreted in a new, modernistic way.”

In January 2021, Fender announced at NAMM the new American Ultra Luxe Stratocasters, described as an evolution of the American Ultra models and the brand’s most advanced factory instruments yet.  These guitars were launched after four months, in May, with the motto “For players who demand the ultimate in performance and tone.”
The American Ultra Luxe Stratocaster was available in a classic 2-Tone Sunburst on alder body or in a stunning Plasma Red finish on ash body with maple neck, both coupled with a black 3-Ply pickguard. Three Ultra Noiseless Vintage pickups and the S-1 Switch, which added the neck pickup to position 1 and 2, allowed endless tonal possibilities without hum.
The American Ultra Luxe Stratocaster Floyd Rose HSS was available in Silver Burst and Mystic Black and featured Ultra Noiseless Hot single-coil pickups and an Ultra Double Tap humbucker, which could be split into a hot single-coil via an S-1 Switch, as well as an Original Floyd Rose Tremolo system.
The Augmented “D” neck shape was almost like the '50s Fender “D”, without the discomfort sometimes associated with these necks, and provided a playing experience that felt both classic and modern.
Antonio Calvosa
​ 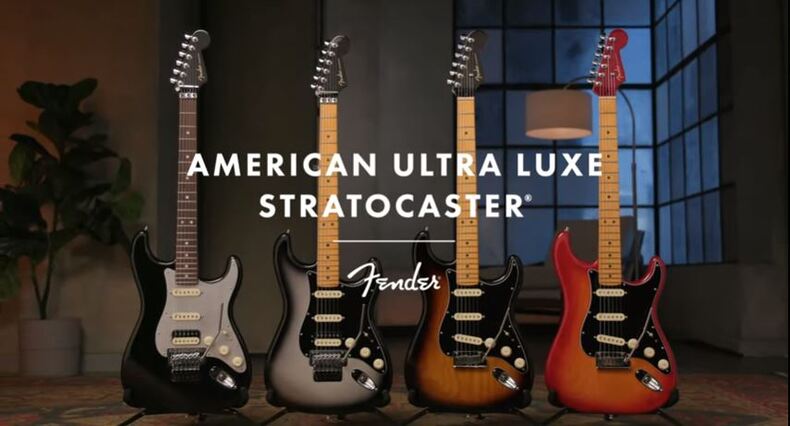