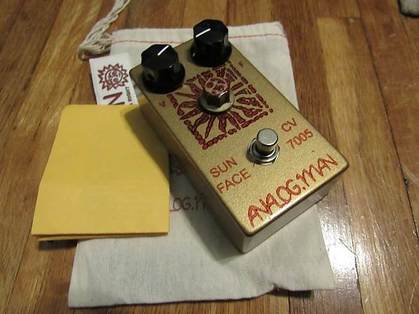 Afterwards, in fact, you start playing full time with the new pedal and you make it your own, you try out the different sound combinations, you appreciate its nuances or you hate those little flaws that you had never heard before, or those 'hidden' frequencies that had always bothered you a little.  You start longing for a pedal that sounds less compressed, grittier, grainier, bigger, more defined, scratchier, more vintage, more modern...
With the Analogman Sunface the search can finally come to an end.  True, it is expensive, but the result, for those like me who are looking for the characteristics of the old Fuzz Faces, is truly remarkable.
'We do pedal right', says the motto of Mike Piera, the 'analogue' man behind the US company. Indeed, his pedals have been chosen by artists such as Kenny Wayne Shepherd, Doyle Bramhall II, Carl Verheyen, Scott Henderson, and Gary Clark Jr.
Sunface became famous in the past for its NKT75 germanium transistors (which Mike differentiated into white dot and red dot).  Having run out of these transistors, the analogue man started offering the Sunface with other transistors, both germanium and silicon.  My choice fell on the 1973 Mullard CV7005 germanium transistor, medium/low gain, on which the code 'KBDA 7301' stands out, where 'B' means it was approved by the British military authorities, 'D' is the code referring to Mullard Ltd., 'A' refers to the Mullard Blackburn factory, '73' stands for 1973, and '01' indicates the first week.
The CV7005 sounds like the NKT275 because, according to Mike, they are most probably the same transistor, which is why he had selected and purchased a fair number of them years earlier.  The CV7005 is much more like the white dots than the red dots.  In fact, it is clear and sounds great when rolling off volume knob to get some Hendrixian bright clean tones.  In addition, the Sunface CV7005 impresses with its dynamic response.
This stompbox, small and with a very robust construction, can be customized to suit your needs by Analog Mike.  The basic version, equipped only with a volume and a gain knob and a true bypass switch, could not be more straightforward.  I chose to add the Sundial knob, which allows you to adjust the amount of bias to get a more or less scratchy or grainy sound and to adapt the pedal to any temperature.  By opening the stompbox it is also possible to turn the trimmer knob, which is useful for adjusting the maximum amount of fuzz in the pedal.  On Mike's advice, I avoided the jack input and opted for a non-alkaline battery, which positively affects the tone.  On the other hand, if I had wanted the jack input, I should have been careful not to share its power supply with that of the other pedals, as its ground is positive.  I also avoided the LED because it would greatly increase the rate of battery consumption.  In order to be able to insert this effect into my pedalboard without worrying about disconnecting the cables once I had finished playing, I had Mike install the on/off fuzz pot, a mechanism that allows the battery to be disconnected whenever the fuzz knob is turned fully counterclockwise.
It's certainly not for those looking for a modern fuzz, but those who appreciate the vintage sounds of old records will have fun with the Sunface.
​