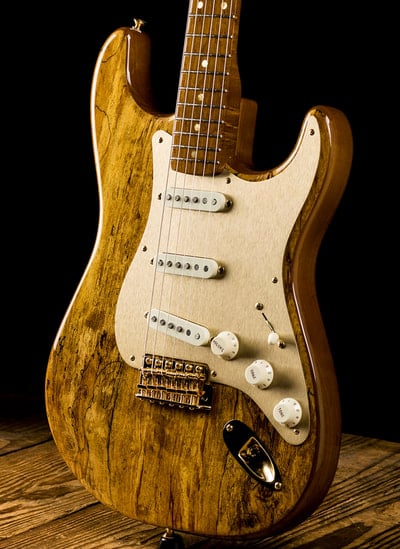 In mid 2014 the Custom Shop announced the birth of a new team built series, the Artisan, which debuted in the 2015 Fender catalog.  These were very valuable instruments, available only for short period of time, which used special and exotic, very figured and “gloss” finished, woods.
The ​Quilt Maple Top Artisan Stratocaster, the Spalted Maple Top Artisan Stratocaster and the Walnut Top Artisan Stratocaster were the first to be put on the market in 2015.  They were very similar instruments, which differed mainly in the body.  As the name suggests, the Quilt Maple-Top featured a body with a quilted maple top, extremely figured, emphasized by the new Tiger-Eye Burst finish; the Spalted Maple-Top, instead, had a spalted maple top in the endearing Buckeye finish and the third, the Walnut-Top, distinguished itself from the other two because it had a walnut top, also Buckeye finished.  All these bodies fit perfectly with their tortoise shell pickguards.
Necks were soft “V” shaped, while fretboards, which could be both maple and rosewood, had a graphite nut and twenty-two narrow jumbo frets.  The three Custom Shop Fat '50s pickups with chrome “lipstick” cover matched well with the chrome volume and tone knobs and with the chrome tuning machines with ebony keys.  The bridge was the two pivot style with block saddles.