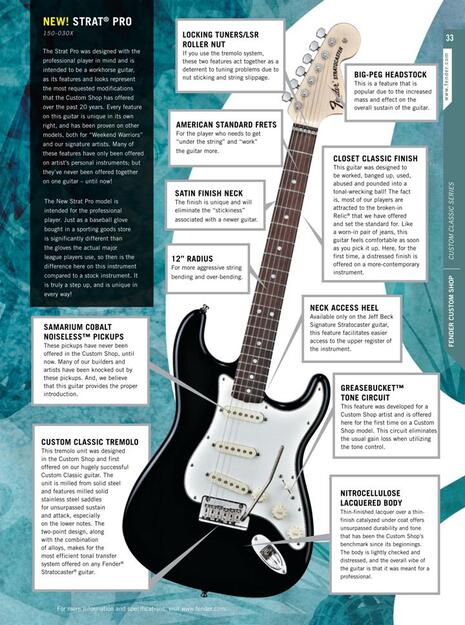 2006
One of the most important innovations of 2006 was the introduction by the Custom Shop of the new ​Stratocasters Pro, guitars in which the “most requested modifications that the Custom Shop has offered over the last 20 years” were reunited all together.
Developed by Bill Lawrence, they were renewed every year with different characteristics.  They could have small or CBS style headstock and feature, or not, a roller nut.  They could sometimes appear in a relic or closet classic finish, in 2011 featured a pine body, and eventually, with locking tuning machines, a more or less flat fretboard, twenty-one or twenty-two frets, different pickups, contoured heel, or not, and for a period were also equipped with the Greasebucket circuit.  In other words, they were guitars quite different from one year to the next.
The writing “Pro Model” followed by different numbers according to the model, stood out on the back of the headstock, in addition to the Custom Shop V Logo. There has been much speculation about the real meaning of "pro".  There are those who are convinced that it means "professional" and those who insist that it stands for "prototype".  In addition to the Stratocasters Pro, some special models with different finishes than those in the catalog were made.  It is interesting to note how, at first, they were included in the Special Edition Series and since 2009 in the Limited Collection.  They remained in production until the end of 2013, although in the following years some models were fabricated at the specific requests of some dealers.
In 2014 the series changed its name to Proto Series, which presaged the 2015 Postmodern Series.
Antonio Calvosa
​
Other Stratocaster Pro models. The 2011 and 2012 Strat Pro were very different from the first 2006 model (courtesy of Fender)