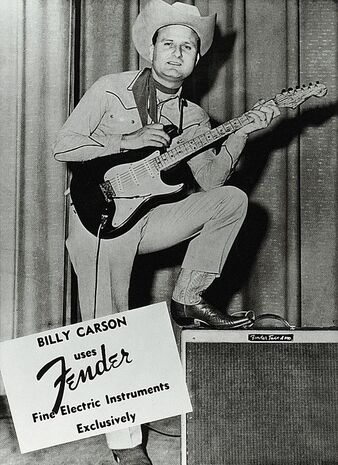 Will a man cry and beg for a guitar? Apparently, yes.
Many among the vintage and Fender fans might recognize in this portrait Bill Carson, an important salesman and endorser of Fender instruments.  He was a country guitarist who in the '50s had played in the Eddy Kirk Band, for Hank Thompson, Lefty Frizzell, Spade Coley and Billy Gray.
His Cimarron Red Stratocaster, which you can see in the photo, is one of the very first models made by Fender.
According to Carson, that particular color had already been used by Leon McAuliffe, steel guitarist for the Cimarron Boys, Bob Willis and the Texas Playboys.  Leon asked for a Fender of this color and, for this purpose, sent to the factory a can of nitro paint made according to his specs.  A small part of the paint remained unused and Bill asked to use it for his Stratocaster.  Later Bill called this color Cimarron Red taking inspiration both from Leon’s band and from the club where Leon used to play, the Cimarron Ballroom.
But only a few know that the neck in the photo is not the one with which the instrument was born.  The bird's eye maple neck you can see was, actually, a neck that had been selected for himself, due to its beauty, by Forrest White, Fender plant manager and great friend of Leo.
A Saturday morning Bill, who at that time played for Billy Grey, entered Forrest's office looking for a neck, as that of his Cimarron Red “custom” finished Stratocaster was ruined.  Normally Forrest would find many spare necks in the warehouse, but that day the only one nearby was a beautiful bird’s eye that Forrest had decided to keep to himself.  Desperate, Bill asked him if he could see that neck, though Forrest repeatedly stated that it was not available.  At the sight of that marvelous piece of figured maple, Bill began to beg Forrest for it.  He looked like a kid, crying and imploring.  “You have never heard such begging in your life,” Forrest remembers.  “It is painful to hear a grown man cry, and Bill Carson could put on an act like you had never seen or heard before.”  Bill’s despair and insistence were such that Forrest realized that the only way to stop him was to give him that neck and mount it on the Cimarron Red Stratocaster body.

This guitar became so famous that in July 1991 Don Schwartz, owner of the Music Trader, contacted John Grunder of Fender Custom Shop to propose him to make a commemorative Stratocaster.  The idea was welcome and, after receiving Bill’s approval, the production of 100 Bill Carson '57 Stratocaster, all ’57 style, whose serial number started for “MT” (Music Trader), Cimarron Red finished and equipped with that bird’s eye neck which made the country guitarist cry for despair and desire, began.
The first 41 were sold by the Music Trader but, due to some financial problem related to Bill Carson’s project, the production was stopped in July 1992 and then resumed under Fender distribution.  The right- handed guitars with the serial number from MT000 to MT039 and the left-handed MT100 (to which, in error, the signature wasn’t applied on the headstock) were distributed by the Music Trader; the rest, from MT040 to MT099, by Fender.  Unfortunately, 51 neck plates were lost, no one knows how, in Corona factory.  This is the reason why many Bill Carson Strats, distributed by Fender and not by Music Trader, featured the engravings on the neck plate, which included the serial number and the country guitarist’s signature, in a position other than those distributed by Don Schwartz’s factory.
The Custom Shop replica and the two different neck plates: on the left, the one distributed by Music Trader, one the right the neck plate distributed by Fender.