THE SWITCH OF THE STRATOCASTER 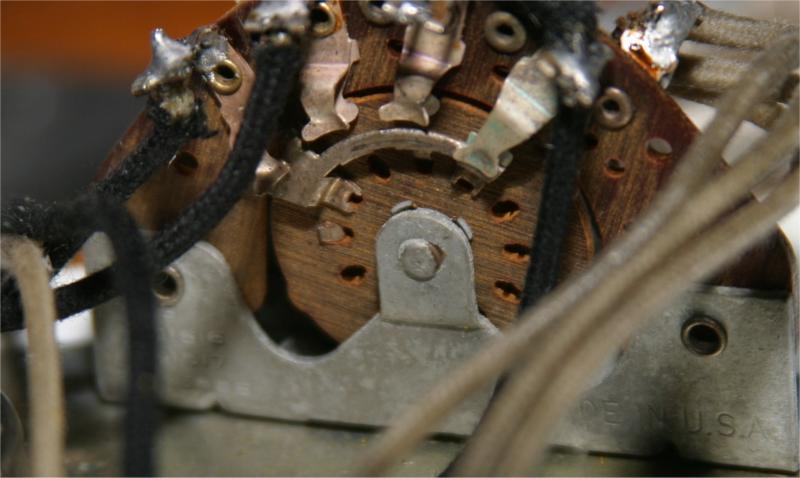 Until 1977, Fender Stratocaster was equipped with a spring-loaded 3-way selector switch by Centralab, the ​CRL 1452.  It consisted of chrome-plated chassis with closed top, dark brown phenolic rotor and dark brown phenolic stator holding the switch contact, which had flat side cuts until early '60s.
The early '50s CRL 1452 usually featured two patent numbers (PATS 2291516 2291517 2503885) and the “MADE IN U.S.A.” stamp, not always clearly visible due to oxidation, while “CRL 1452” was stamped on the back of the chassis.

In late 1962, the CRL 1452 switch was redesigned and, between 1962 and 1963, it gradually replaced the previous one.  The new switch had a new half-moon stator with rounded edges, the rotor material changed from phenolic (brown) to glass epoxy (white) and the chassis featured two extra little holes. ​
At first, all the three patent numbers were retained and the chassis had the top cut open and the two extra holes.  However, the first two patent numbers were deleted soon and only the patent number “2503885” remained stamped on the chassis.  This switch design was changed to a closed top, which was used until 1965 then for some reason they changed it again.
Since 1965, some CRL 1452 switches featured a diamond-shaped logo stamped on the chassis.  This logo was always stamped on '70s units.
It seems that the CRL 1452 switches from the '70s were only assembled in the United States, while the components came from Japan, despite of the "MADE IN U.S.A." stamp.
Other switches were rarely used.  However, they were not common, because Fender bought very few.
Only in 1977 Fender started to use the five-way switch on the Stratocaster guitar.