...and its influence on Eric Clapton 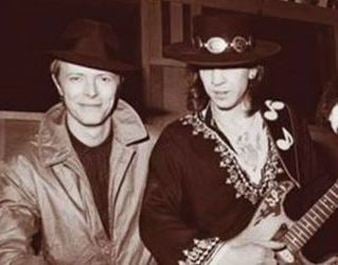 Stevie Ray Vaughan was unfamiliar with Bowie's work, but they talked together for hours about music, funk, Texas blues and its origins, and eventually David proposed a collaboration.
Stevie played the guitar tracks on David Bowie's album, such as the famous Let's Dance and China Girl.   However, the one in which Stevie Ray Vaughan's style is most noticeable is one of the album's less famous tracks, Cat People (Putting Out the Fire).
According to Alan Paul and Andy Aledort in Texas Flood, a book about SRV, Stevie Ray's style on Let's Dance caught Eric Clapton himself off guard, “I was driving, and 'Let's Dance' came on the radio,” Slowhand recalls.  “I stopped my car and said, 'I have to know who this guitar player is today.  Not tomorrow, but today.  This has only happened to me three or four times ever, and probably not for anyone in between Duane Allman and Stevie.”
After the release of Let's Dance, Stevie was supposed to join Bowie's tour, which would have prevented him from promoting his own album Texas Flood.  So, David's management decided to allow the Stevie Ray Vaughan and Double Trouble to open for Bowie on some pre-arranged dates.  However, shortly before the start of the tour, Bowie's management backtracked.  Not only did they stipulate that Stevie's band would not be the British singer's support group, but the guitarist would not even be able to talk about his album in interviews. This prompted the guitarist's manager, Chesley Millikin, to literally remove Stevie's suitcases and instruments from Bowie's bus, which left for the tour without him.
Thanks to this new freedom, Stevie Ray Vaughan was able to start promoting his own Texas Flood without further hindrance.