HISTORY oF THE Stratocaster

Dick Dale and the Stratocaster 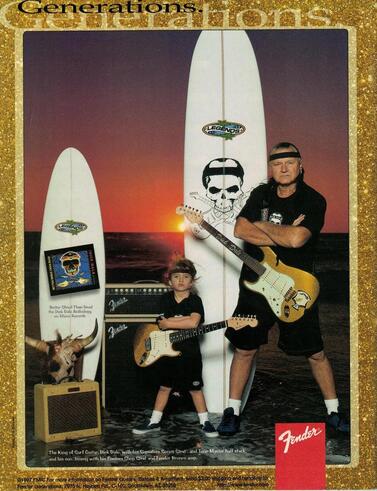 The Beast and the Dick Dale Signature Stratocaster

Dick Dale was a guitarist often called “The King of Surf Guitar”, because his goal was to combine surfing, which he practiced with passion, and music, through sounds capable of remembering the sound of the waves of the sea shattered on the rocks, like those you can listen in his 1962 Misirlou, the song chosen by Quentin Tarantino for Pulp Fiction.
He started playing surf music in the '50s in Balboa, California. He was still a boy when he introduced himself to Leo Fender telling him he needed a guitar: “My name’s Dick Dale, I’m a surfer, I got no money, can you help me?”, Dick remembered in an interview.  Leo answered: “Here, I just made this guitar.  It’s a Stratocaster, go ahead and play it, tell me what you think.”  Leo Fender started laughing in amazement when he saw the left-handed Dick connect the guitar to the amplifier and play it upside down, without reversing the strings.
Despite the age difference, they became friends and Leo had a left-handed Stratocaster built for him, known with the name of The Beast, on which the guitarist kept the reverse order of the strings.  The Beast was a Stratocaster with a rosewood neck of the early '60s, to which Dick added a switch that activated at the same time the pickup at the bridge and that at the neck and on which he eliminated the tone controls.  He used very big strings (maybe .016 - .060!), blocked the tremolo with a piece of wood and fixed it at the body with all the five springs.
​
Those who had the opportunity to attend Dick Dale's old concerts must have noticed that he used to play Stratocasters of different colors.  Actually it was always the same guitar, to which Dick applied new layers of paint, as at that time there was one of his emulators who did concerts imitating Dick and copying his appearance.  If the King of Surf played a guitar of a specific color, his emulator repainted the guitar in the same way.  This went on for a while, until Dick stopped at Gold Sparkle.  “Finally, my buddy, who used to paint cars, painted it the first metal-gold-flake”.  Dick attached two decals to the body, an American flag on the upper horn and the Kempo Karate symbol which he received from his martial arts master, who, according to Dick, also happened to be Elvis Presley’s bodyguard.
In 1994 the Fender Custom Shop, under the supervision of John English, who examined The Beast, started the production of the ​​Dick Dale Signature Stratocaster, which Dick called The Beauty, to contrast it with his The Beast.  It was based on the guitar of the King of surf, but obviously right handed with reverse headstock.  Its pickups were, in the beginning, three Custom 50’s (later replaced by Fat ’50s).  “The first pickup gives me a real fat sound,” Dale stated.  “While the second pickup drops the volume down somewhat, and the saddle pickup gives me a treble bite.”
​

Dick’s performances were always spectacular, because he used to play at such volumes that speakers and transformers could not stand that power and wore out.  It seemed that Dick had broken almost fifty amplifiers, so that once Leo asked him: “Why do you have to play so loud?”  And the guitarist answered: “When you have 100 people come in to see me, it’s okay.  But when a theater fills up to 4,000 people, their bodies soak up the bass sound of the guitar coming through the amplifier.”
To help Dick, Leo, together with his close Freddie Tavares, designed an amplifier equipped with a 85 watt transformer that could handle 100-watt peaks; instead of mounting the classic Jensen speakers, Leo, Freddie and Dick went to the maker James B. Lasing looking for a 15" speaker, the JBL-D130.  The name of the new amplifier was inspired by Dick: Showman.  However it was still not enough: Dick needed even greater volumes as the public at his concerts grew more and more.  So Leo and Freddie installed a 100 watt transformer, made by Triad and called Dick Dale Transformer, and two new speakers JBL D-130F: the Dual Showman was born.
Dick Dale also played an important role in the first Fender reverb unit.  The guitarist was still not satisfied with the sound because he was convinced it didn’t have a powerful enough voice.  Believing that an effect similar to the reverb unit in the Hammond organ was needed to improve it, he turned to Leo, who improved it by adding the dwell controls (harmonics regulation) and the mixer (amount of reverberation).  The Fender Reverb Tank, housed inside a cabinet similar to that of a Fender amplifier, was soon used by Dale also on the guitar to add the classic “wet” sound you can listen on his records and in those of other surf bands.
Antonio Calvosa