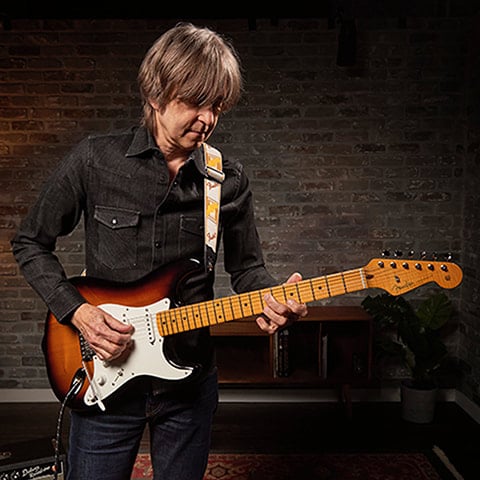 Eric and Michael started working together in 2003 and threw down some ideas that led, after two years of study, to the realization of the first prototype of the new signature, black with white pickguard, in 2005.
In describing his guitar, Eric emphasized that he was looking for a light and resonant instrument, provided with an attractive “vibe” and easily playable.  The starting point was one of his ’57 Stratocasters, but he wanted a flatter (12") fretboard, “flat enough that you can lower action and stretch the strings without having them ‘fret out’,” and larger frets.   Despite loving rosewood fretboards, Eric Johnson preferred the fretted maple neck Stratocasters, as they could produce, in his opinion, a “purer” sound.  In particular he wanted, for his signature, a quarter-sawn neck, because it transmitted vibrations better, and a "V" '57 style shape which tended to a wide "C" at the 12th fret.  The body was supposed to be alder “because that's what they used in the '50s” - some might dispute this claim – and gave the guitar the tone he was looking for.  As desired by the guitarist, it was in two pieces, light and deeply contoured, and covered with a thin nitro finish, with quality equal to that used by the Custom Shop.
​
​Eric decided, for the bridge, to go back to a silver paint on the whole block, except for the junction between block and base plate, where he preferred to maintain a metal-to-metal contact.  The bridge was equipped with four springs and devoid of back plate, as Eric was firmly convinced that in this way the instrument was closer to its ideal sound.
Michael Frank-Braun worked long and hard on the pickups, aiming for ones that could better capture the essence of the vintage pickups’ sound.  Starting from 180 prototypes, Michael selected 19 versions before he got to the final one, capable of capturing the sound of wound strings differently from plain ones.  Thanks to his studies on vintage pickups, he found that even if Leo had ordered wires of the thickness of AWG42, their actual size could vary slightly.  Michael selected the wires produced by a German company, Elektrisola, that made six different kinds of copper wires large about AWG42, in order to obtain the sound desired by Eric.  The type and thickness of the insulation used are also fundamental for the final sound.  Obviously, the choice of Michael and Eric fell on the Formvar applied as subtly as possible.
On the headstock, features that stood out were the Spaghetti logo, the vintage style, but staggered, tuning machines, the bone nut - it was the first time that FMIC used this material for a Stratocaster factory - and the absence both of his signature and of the string tree, which, according to the musician, could bring some intonation problems.  The neck plate exhibited the engraving of a Kokopelli (a prehistoric deity of the Navajo Indian tribe) playing the guitar, the "EJ" initials and the serial number, which always started with "EJ" and was followed by five numbers.
Over time, Fender modified this guitar slightly: apart from the finishes, the tremolo springs were increased to five in 2010, but above all in 2009 also the model with a round-laminated bound rosewood fingerboard was inserted in the catalog.
Finally, in 2018, the thinline version was born. ​ Eric initially approached Fender in 2015 with the idea of adding an “F” hole to his signature Stratocaster to add some of the vibe he gets from his favorite semi-hollow body guitars.  He thought there was a fine balance between the alder body being too solid and too hollow.  Solid-wood alder body might be too biting for his discerning taste, while the other might be too warm. “There's kind of an energy feedback thing that happens from that little bit of hollow bodies,” Eric said.  “So, we experimented with trying to find just the right amount of solid wood through the middle.  It would still kind of give you that punch and that midrange that a solid body does, but leave enough of that regeneration to when you play it. You can feel that.”

It had been brought into the shop as a pickup did not work well.  It was love at first sight.  Eric wanted to buy it and got the owner's phone number, who, at first, seemed a little hesitant at the idea of selling it as it was a gift from his grandpa; he eventually accepted an exchange for a Gibson.
Johnson played the Virginia Stratocaster for a long time.  He used it in the recordings of Ah Via Musicom and Venus Isle and always took it on tour.  Unfortunately one day Eric, falling, broke the guitar.  He tried to repair it, but it appeared to have lost that sound he loved so much and put it up for sale.  The musician tested many other ’54 Stratocasters to replace it, but he couldn’t understand why none of them had that particular sound.  It was the Master Builder Michael Stevens who suggested him that the secret lay in its body in sassafras.  “Evidently, in '53 and '54 Leo got a little bit of Sassafras, and he built some Teles and Strats with it,” Eric remembers.
But this Stratocaster had undergone many changes and consequently was much different from a ’54 stock Stratocaster.  The fretboard had been flattened and larger frets had been mounted by a luthier from Austin, Zack Barry, who repaired the guitars Eric brought him.  In order to obtain a more balanced sound on the treble E, Johnson replaced the original saddle first with a die-cast one of the '70s, yet resulting in a too sharp sound, and finally with a "block saddle" from Graph Tech.
He replaced the middle pickup and the neck pickup with Fender pickups of the end of the '50s with Alnico V pole pieces, that at the bridge with a Di Marzio HS-2.  However, he disconnected the lower coil, and he used a 500k volume pot to recover some high frequencies. While the two Fender single coils had the same polarity, the Di Marzio had reverse polarity, thus giving a “subtle” sound at the central/bridge combination, which the guitarist liked, and he decided not to further modify the electronics.
Eric Johnson substituted the circular string three with a late '50s butterfly shaped one with a nylon spacer.
In conclusion, for Eric, many small details, even the smallest ones, apparently insignificant, contributed to the sound of the guitar, and for this reason he modified his 1954 Stratocaster.
When Fender contacted him to make a replica, he was very enthusiastic: “Wow, could we possibly make a replica of one of my favorite guitars I've ever owned?”, was his first reaction.  He was really excited about the idea: “This is awesome.  Cause, I was able to get a brand-new guitar that has a lot of the soul and, and magic that my original Virginia had.”  Fender made two models: one from the ​factory and one from the Custom Shop, whose production was entrusted to master builder Alex Perez.
“Wow, it's got this tone that I've been looking for that has, like my original one,” Eric declared when he saw the prototype for the first time.  “The neck on these US production models is strikingly similar to every single '54 I've ever played.  And that was by design and by purpose.  It's a little thicker than some Strat necks, but not super wide.  It's wide enough to be comfortable.  It's easier to get around.  And I particularly like this kind of neck; it's really my favorite neck.”
The differences between the factory model and the Custom Shop one concerned mainly hand-wound single coils, the pots, and the figured maple neck as on the Custom Shop model; in both the models the saddles were vintage style, except that of the treble E, which used a Graph Tech String Saver for the Custom Shop model, standard block like those of the American Standards for the factory one.
Antonio Calvosa