BLACK LABEL AND HYBRID STRATOCASTERS OF THE '90S 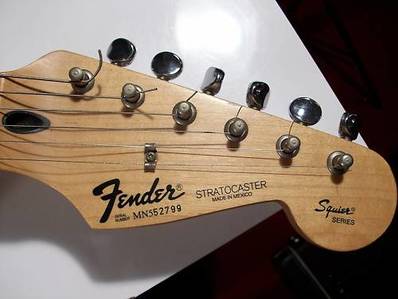 FENDER SQUIER SERIES Made in Mexico

Between 1993 and 1998 many Stratocasters characterized by a Black Logo were made in Mexico.  They all belonged to the Fender Squier Series and differed from the Standard Stratocasters whose '70 style logo was silverish (at least until 2010 when it was replaced by the black one).  The poplar bodies and the necks of These “black label” Stratocasters featured a tulip poplar body, Mexican pickups, and hardware and electronics of oriental origin.
There is the widespread conviction that the black label Stratocasters were assembled in Ensenada with less quality US leftovers, but they were made to plug a market gap where Fender was losing money.  No “factory fire” or “less quality extra US parts”, just driven by money.
The quality of this series was lower than the Squier guitars made in Japan in the past and the Mexican Standard Stratocasters.
The very first Black Labels were Squier Branded and exhibited the “by Fender” decal on the ball of the headstock. There are few units of these Squier Classic Stratocasters (assembled in Mexico), probably introduced to raise the Squier brand after the Korean failure, and they are all dated 1993, because the exact same guitar was immediately renamed “Squier Series Standard Stratocaster”, Fender branded, thus relegating the Squier brand to the eastern regions only.
The subsequent Black Labels were all Fender branded.
The 1994 Fender Squier Series Standard Stratocaster (not to be confused with the Squier brand) and the 1996​ Traditional Stratocaster were very similar guitars.  The first ones featured, in addition to the black logo, a small "Squier SERIES" decal, instead of the classic "Original Contour Body" one on the headstock and a monolayer pickguard; the latter had no decal on the ball of the headstock and had a three-layer pickguard.  The Traditional Fat Stratocaster variant had a humbucker instead of the single coil.  It seems, however, in present times, there are some rare Squier Series which lack the “Squier Series” logo, as it would have been removed by the guitarists who felt the term Squier was synonymous with low quality.

Squier Standard Stratocaster made in Mexico

It almost seems like a paradox, but it also happened that between 1989 and 1992 some Squier guitars were made in the US! The Squier U.S. Standard Stratocasters are few and we know little about them.  They were guitars assembled with warehouse leftovers that probably came from different factories and did not always have the same specs.
Antonio Calvosa