FENDER SAYS
Stratocaster guitars were almost impossible to find in England in the late 1950s and early 1960s, so when George Harrison actually found one in a shop during the pre-fame early days of the Beatles, he meant to get it but was scooped by the guitarist for Rory Storm and the Hurricanes (whose drummer went by the stage name Ringo Starr).
A few dizzying years later, when the sessions for Beatles Help! album got under way in early 1965, Harrison had better luck—he and John Lennon sent roadie Mal Evans out to get one for each of them, and Evans soon returned with a matching pair of Sonic Blue Strat guitars. Harrison’s guitar, serial number 83840, still bore a decal from a music store where it was purchased at one point—“Grimwoods; The music people; Maidstone and Whitstable”. Thus, Help! marks the first appearance of a Stratocaster in Beatles music; heard in the low drone throughout that album’s “Ticket to Ride” and in the solo for “You’re Going to Lose That Girl.” Near the end of 1965, both Strats were put to even more prominent use on groundbreaking album Rubber Soul, most notably on the ringing chordal solo in “Nowhere Man”, and again on mid-1966’s Revolver.
In 1967, sometime between the end of the Sgt. Pepper’s Lonely Hearts Club Band sessions and the June 25 live worldwide telecast of “All You Need is Love”, Harrison took up paint and brush himself to give his Stratocaster a multicolored psychedelic dayglo paint job. It also appeared prominently in the “I Am the Walrus” segment of 1967’s Magical Mystery Tour film. The guitar remained a favorite of Harrison’s for the rest of the decade, and by December 1969 Harrison had painted “Bebopalula” on the upper body, “Go Cat Go” on the pickguard and “Rocky”—the guitar’s nickname—on the headstock.
The Custom Shop is now both honored and thrilled to introduce a faithful recreation of Harrison’s “Rocky” Stratocaster. Master Builder Paul Waller examined and measured the original in exacting detail—body, neck (with a rare asymmetrical “C” profile), pickups, wiring, and everything else right down to Harrison’s famous DIY paint job. Even the “Grimwoods” decal remains in place on the back of the headstock. With these features and more, it’s an amazing and meticulously crafted Custom Shop tribute to a truly magical guitar played and loved by one of rock’s greatest guitarists. 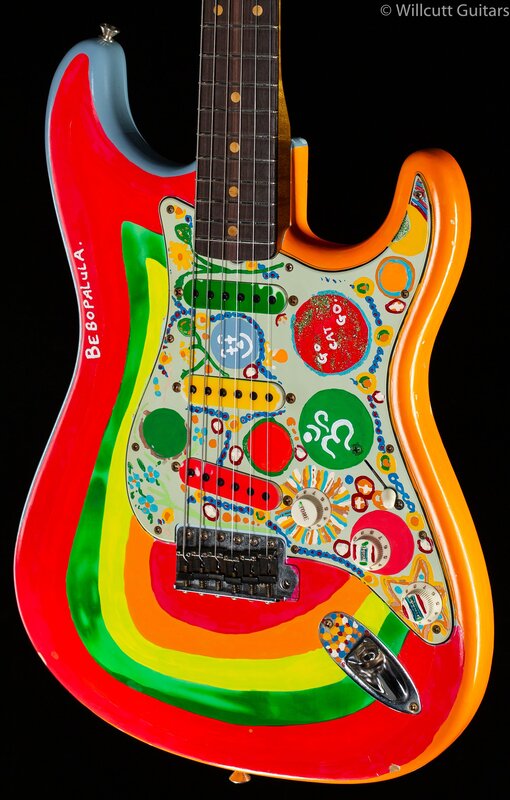 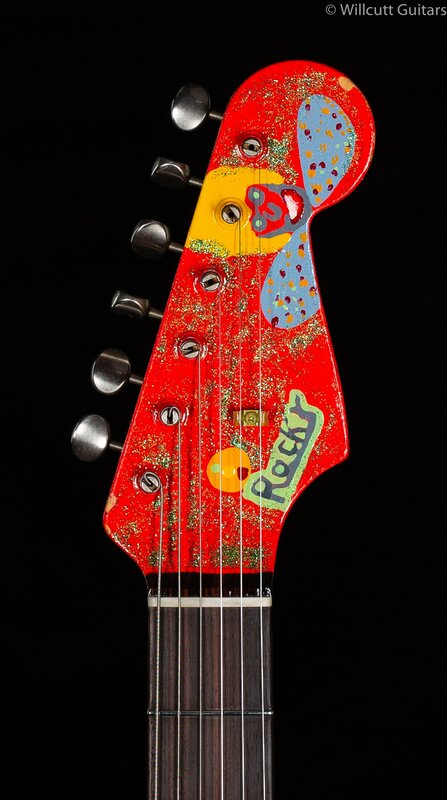 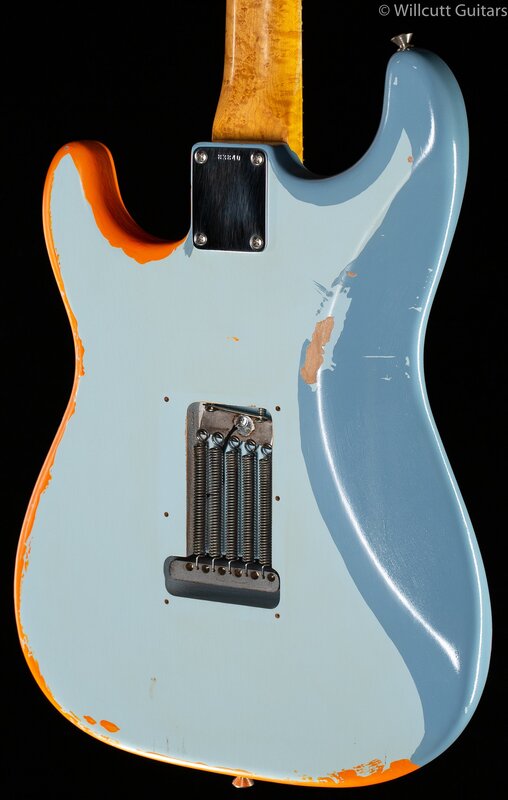 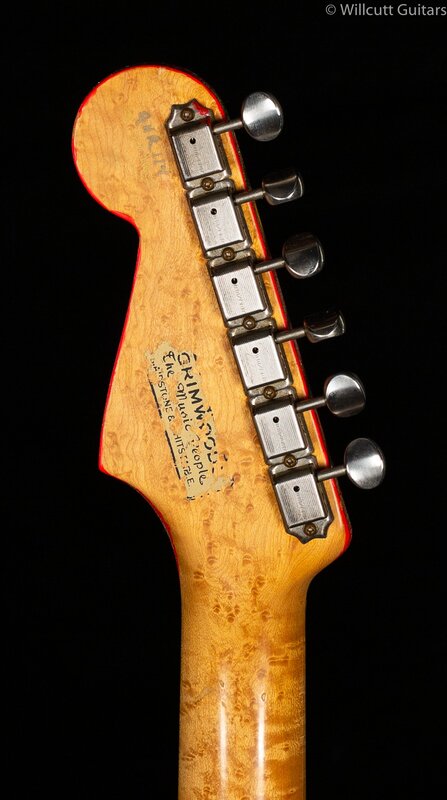 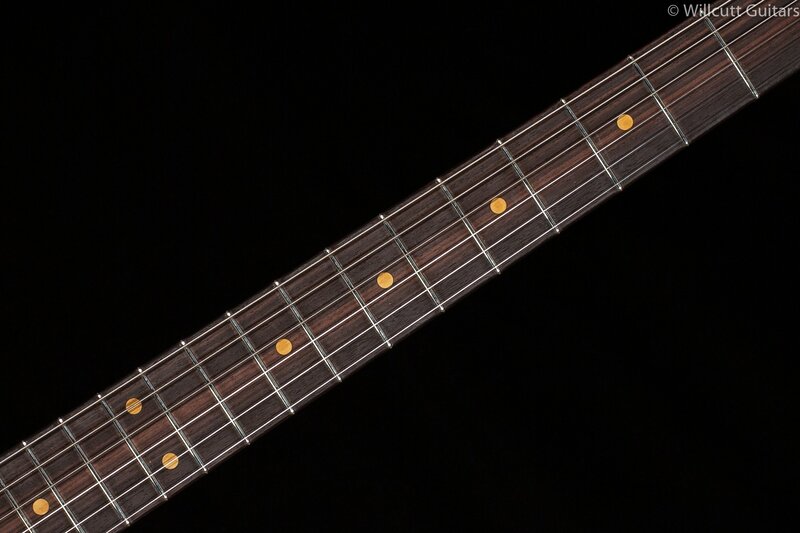 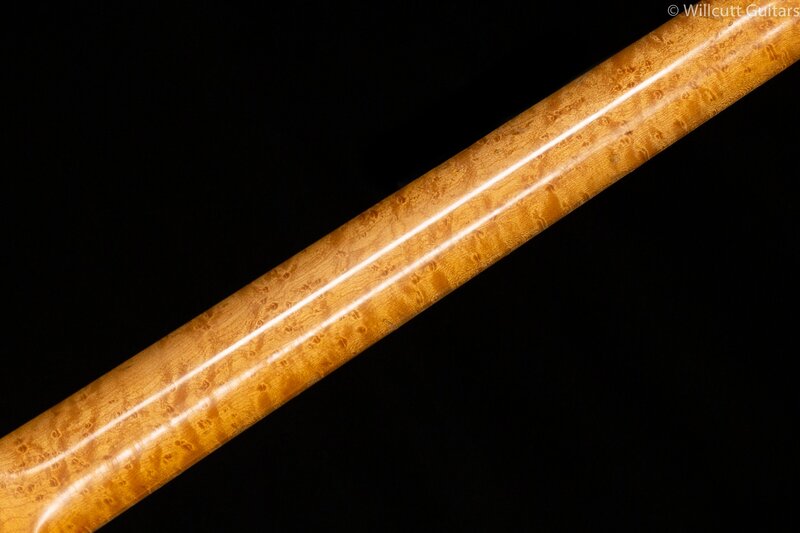 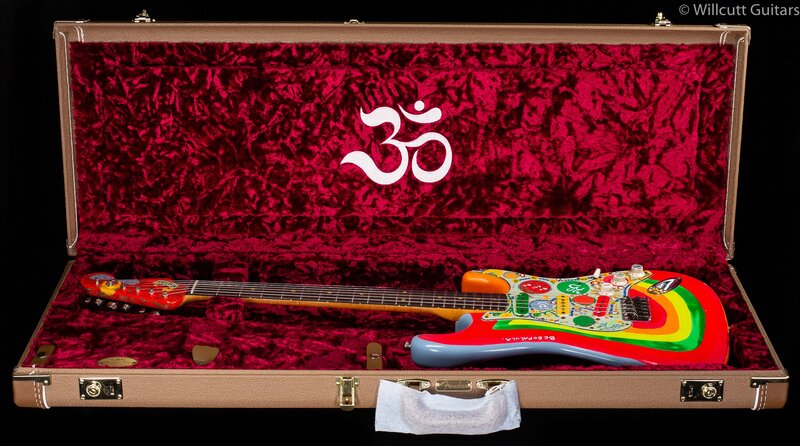 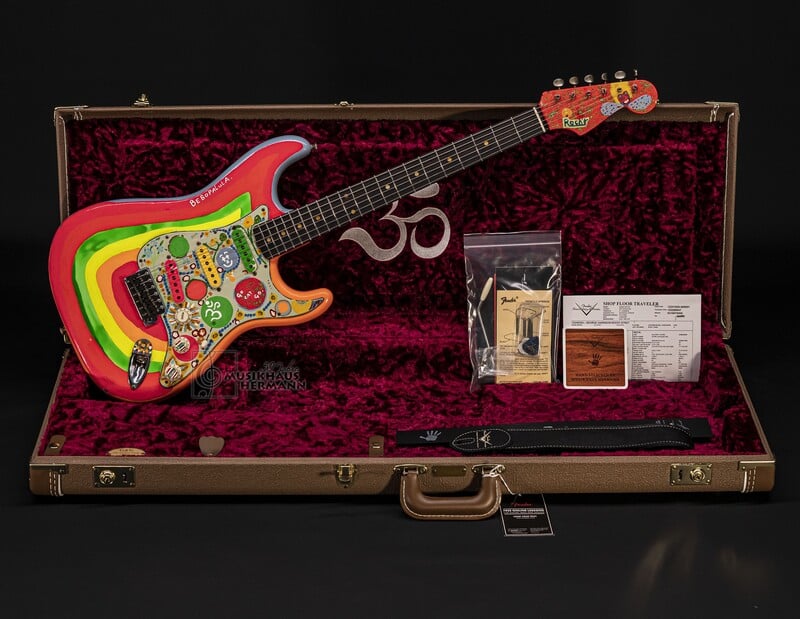 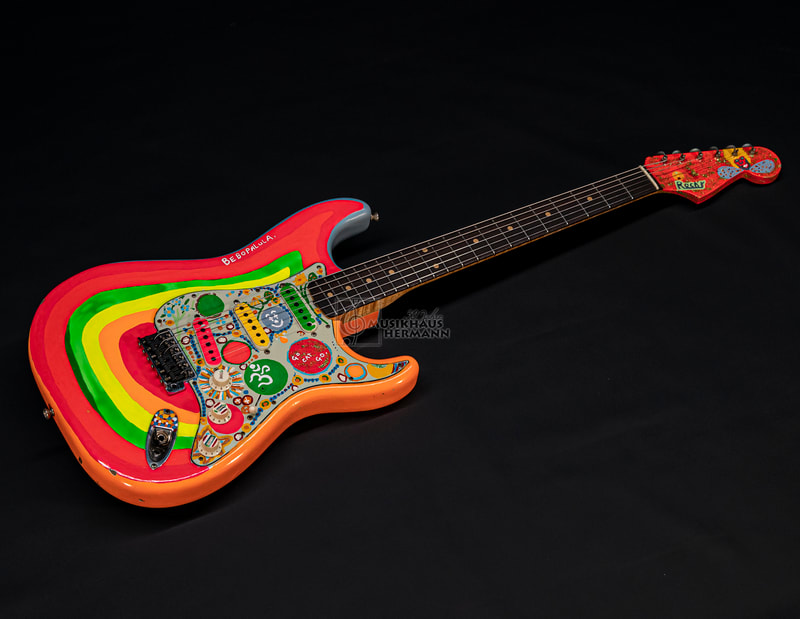 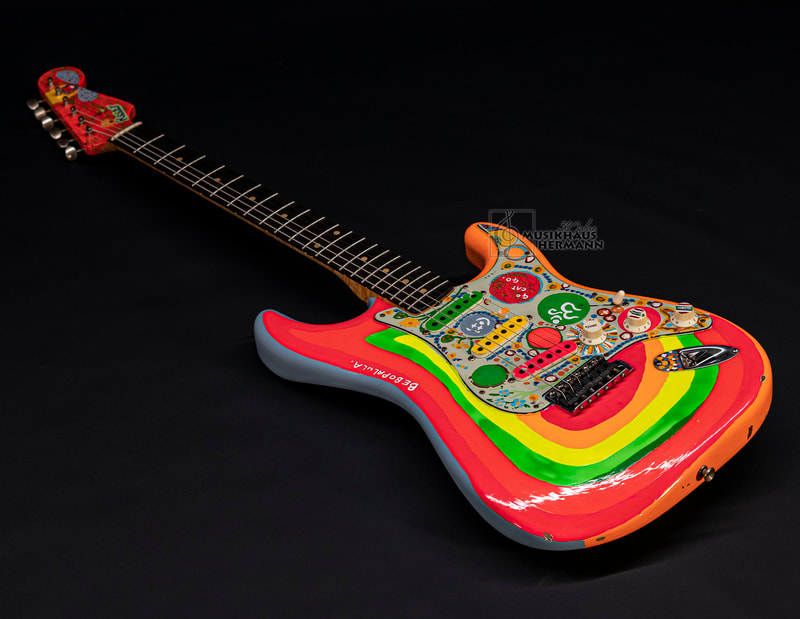 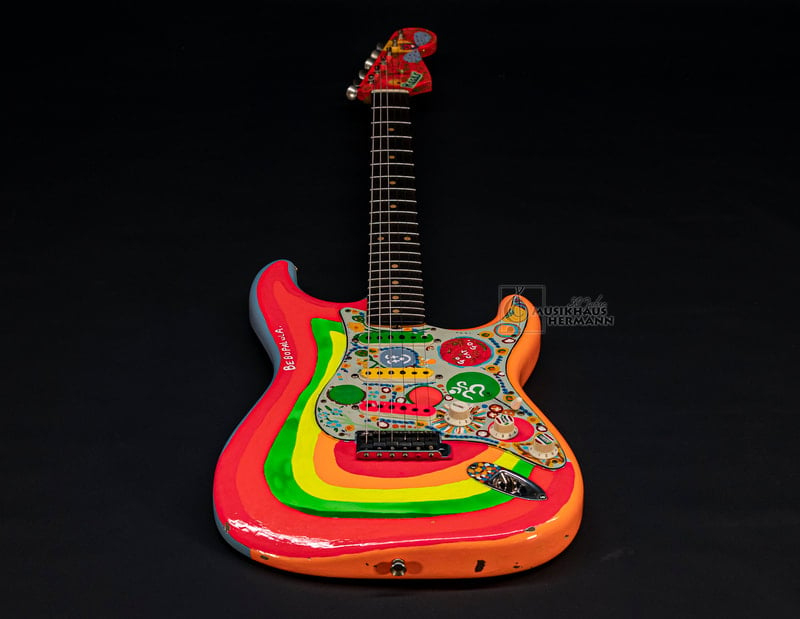 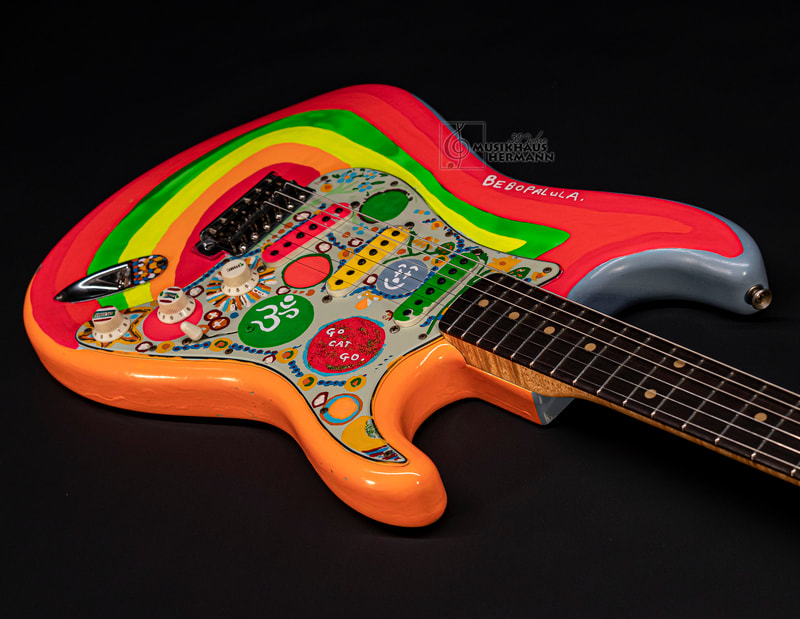 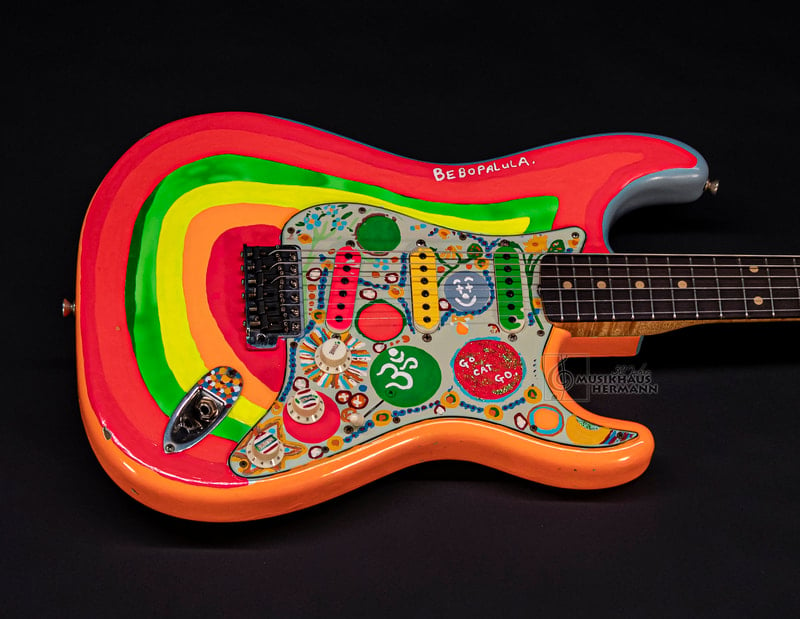 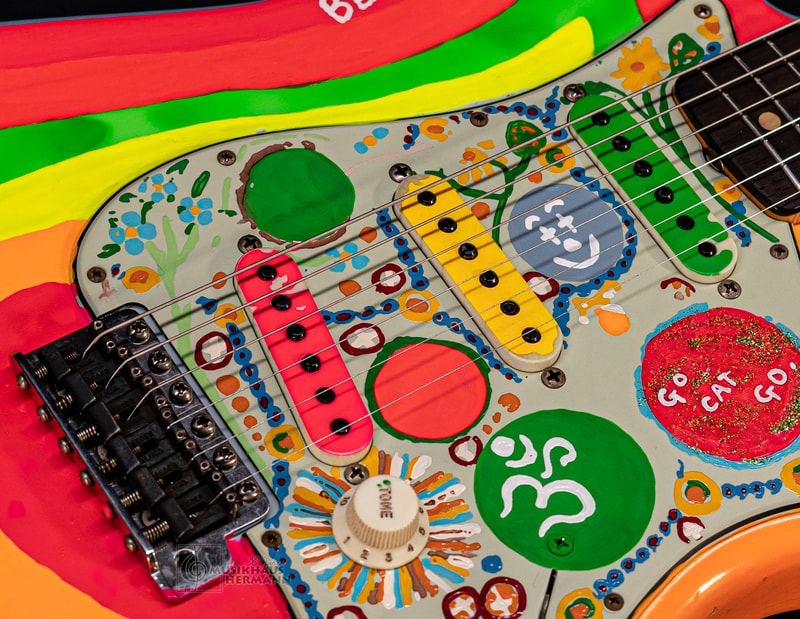 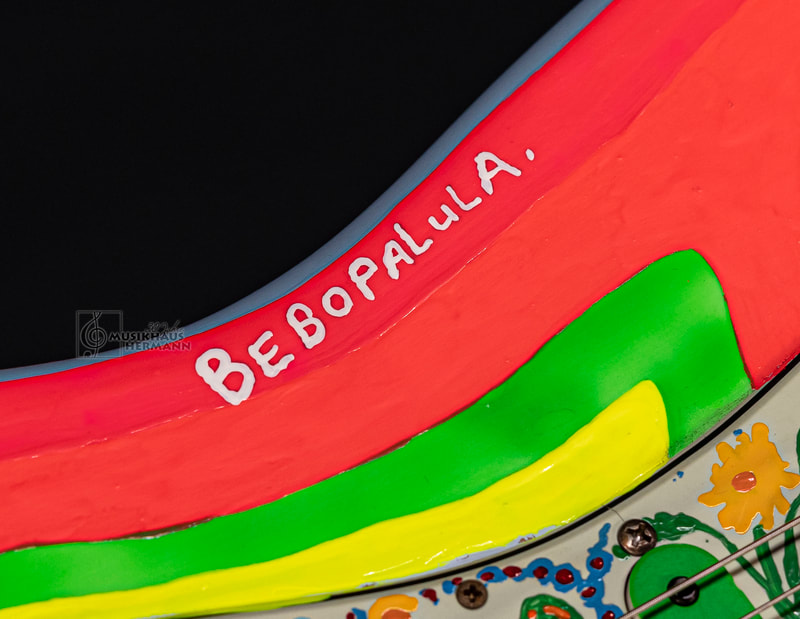 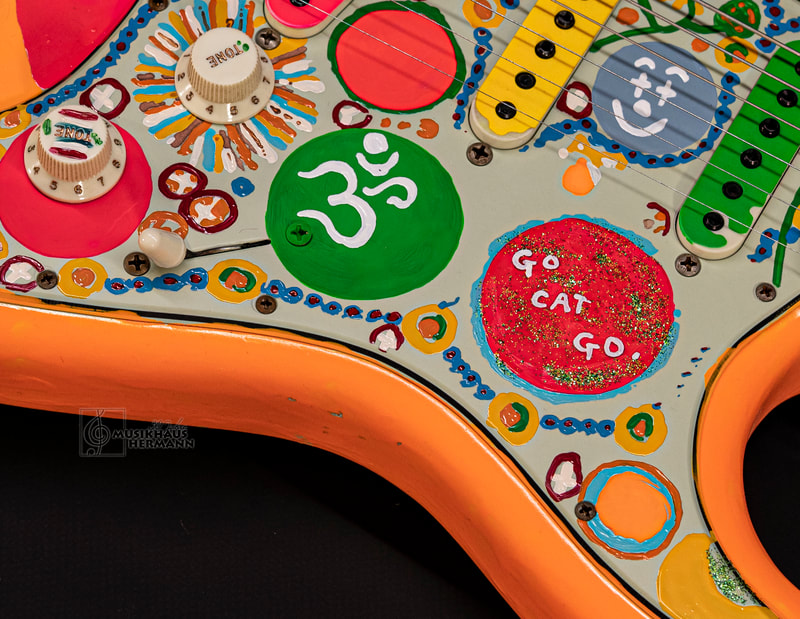 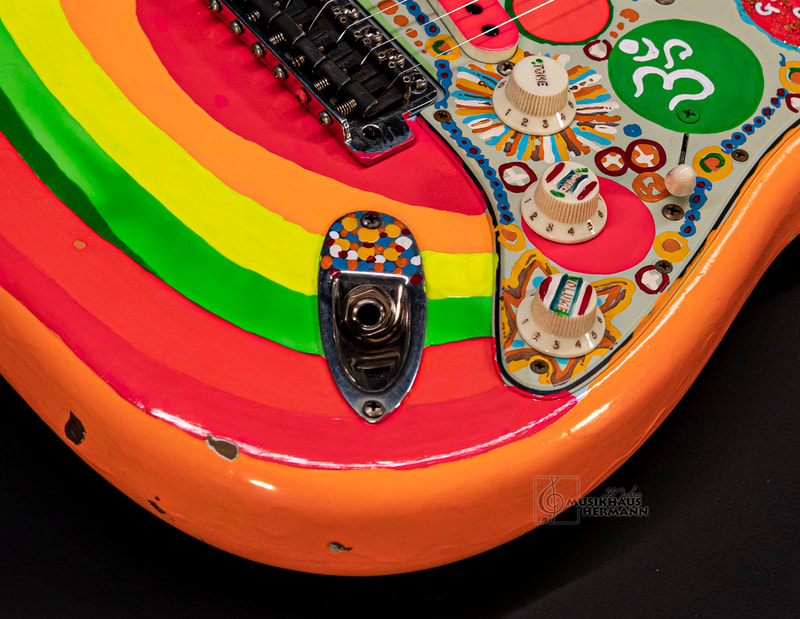 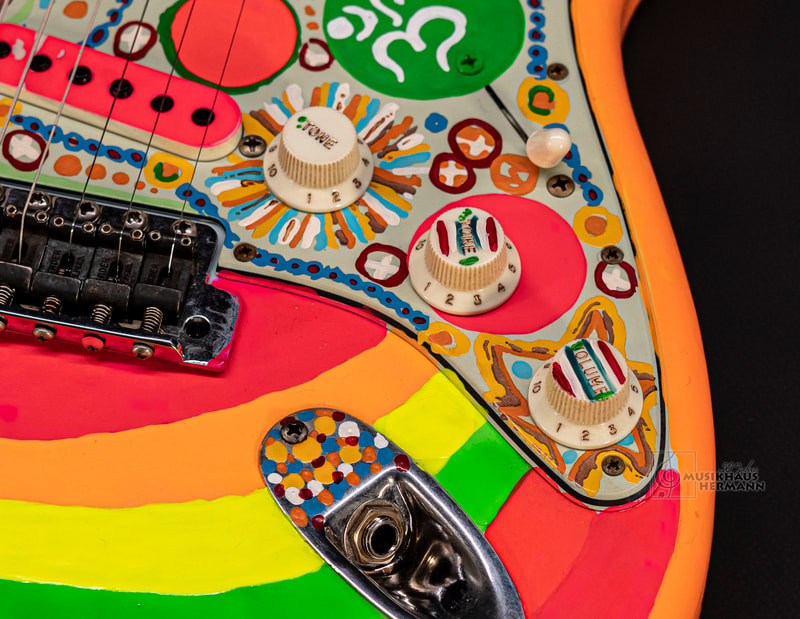 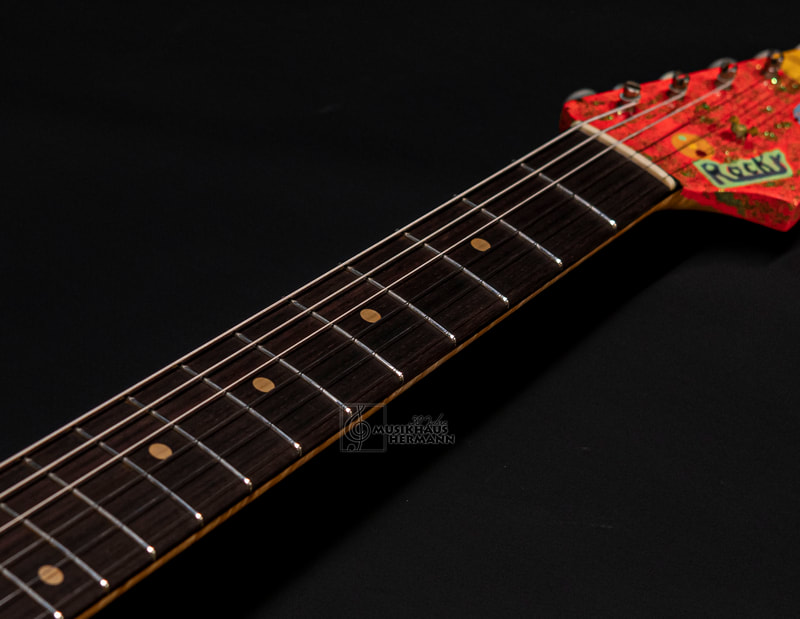 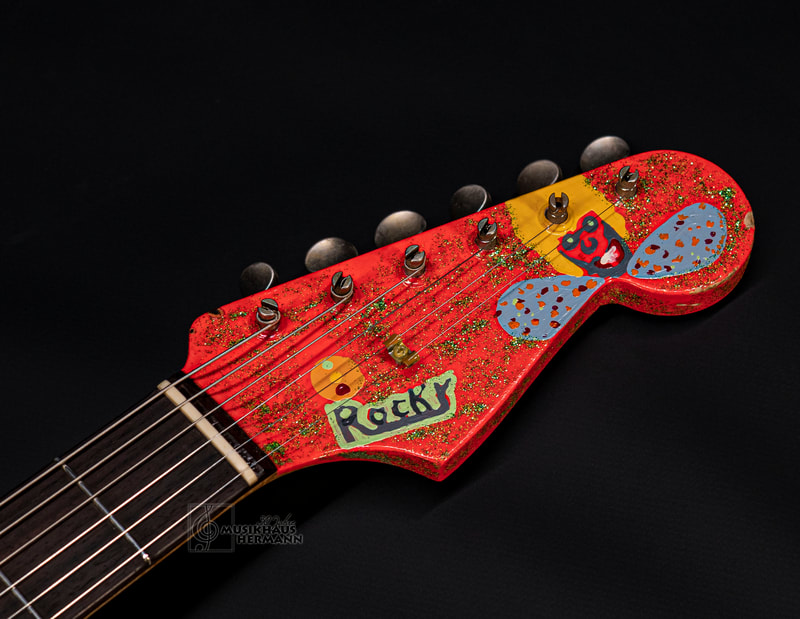 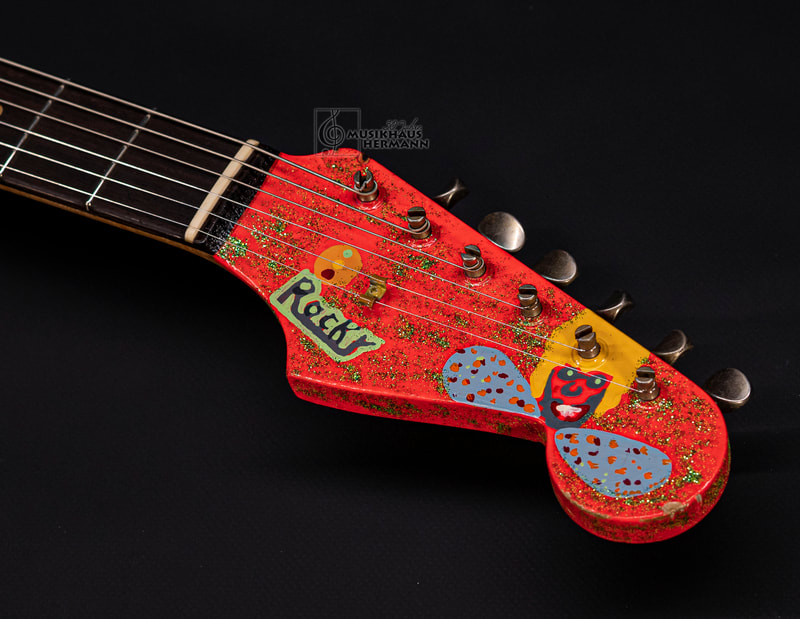 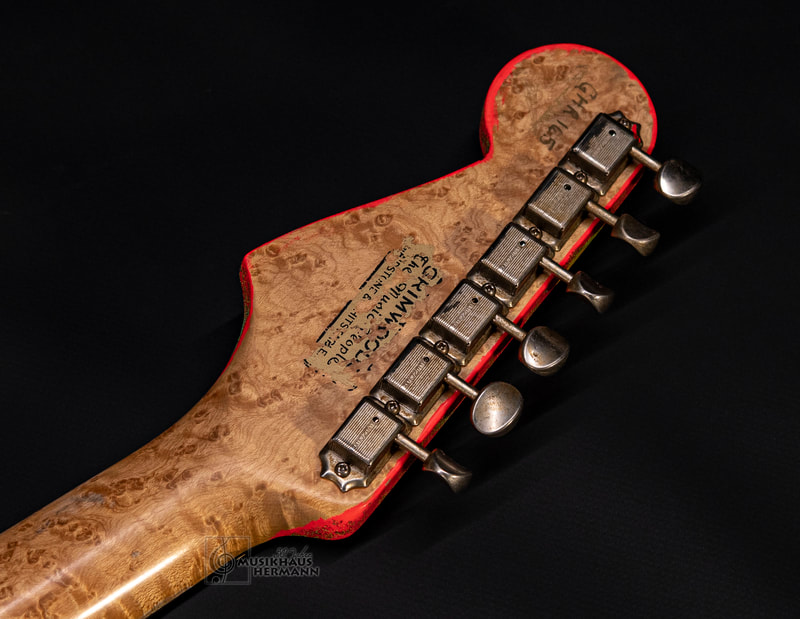 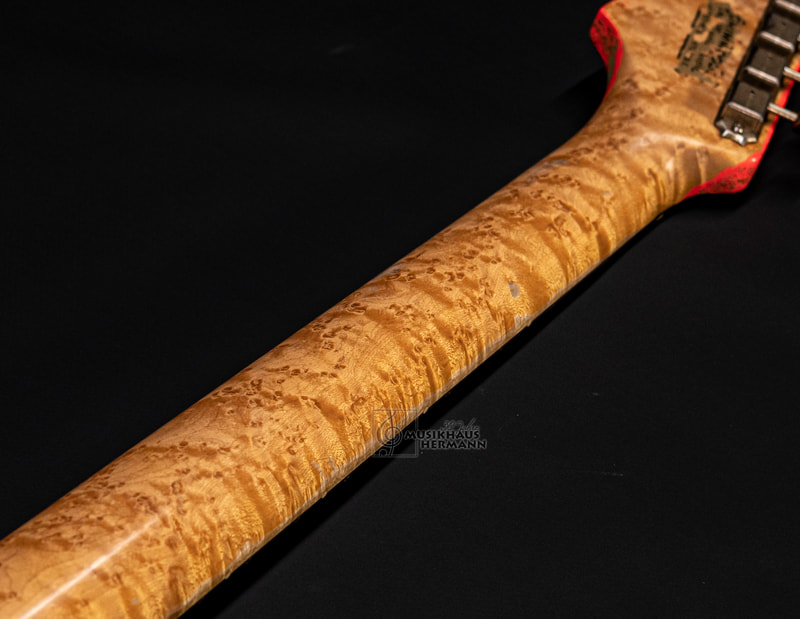 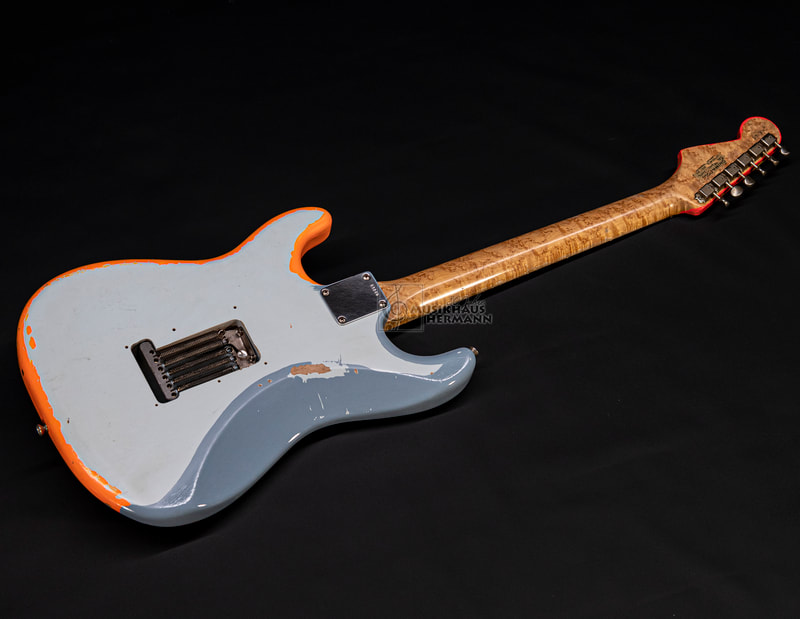 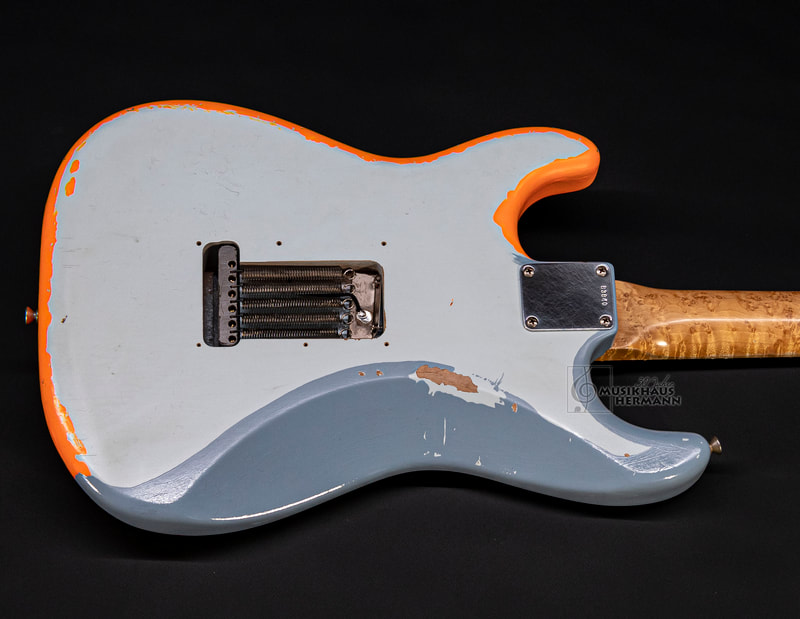 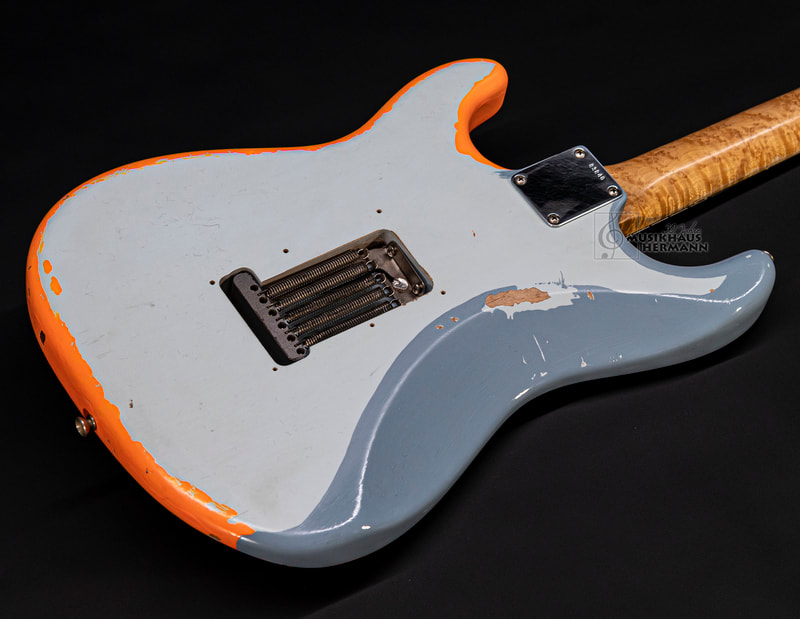 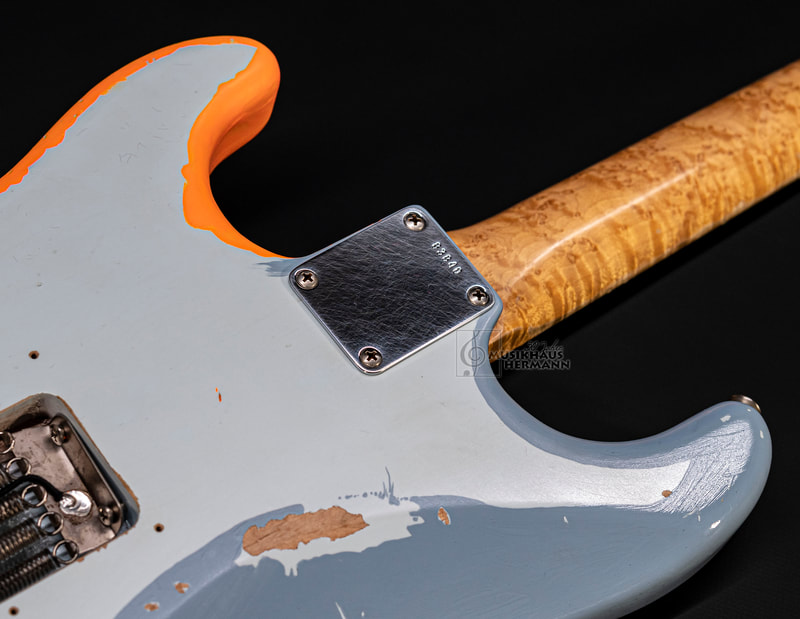 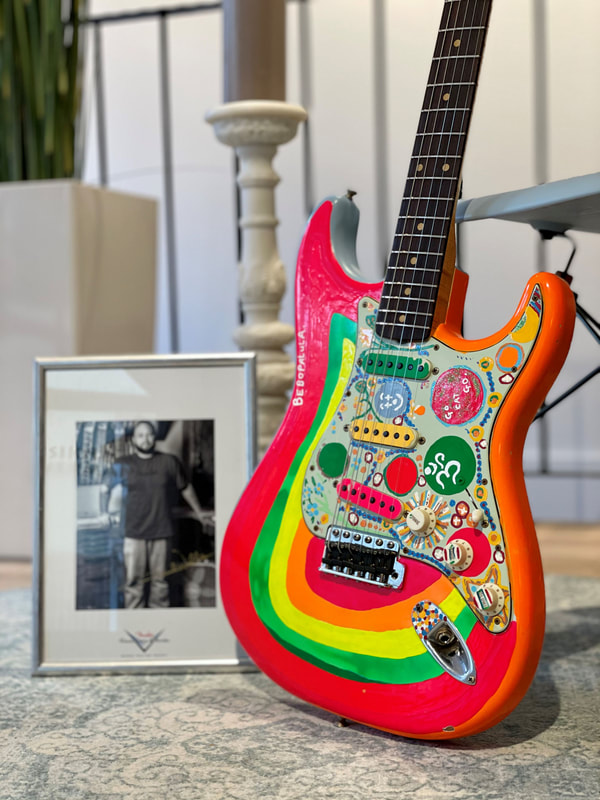 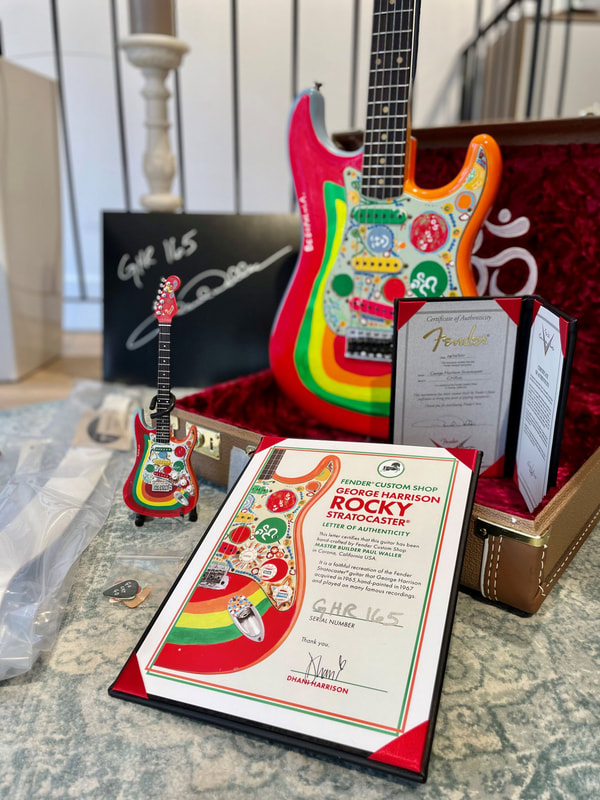