Harrison, Clapton and the Creation of “While My Guitar Gently Weeps” 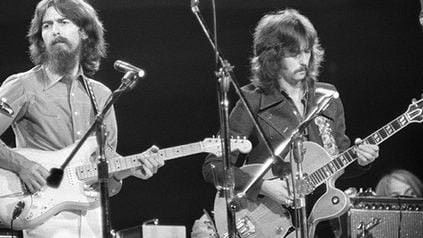 Harrison e Clapton al Concert for Bangladesh del 1971 (foto spectator.co.uk)
While My Guitar Gently Weeps is the first of four songs on the Beatles’ White Album written by George Harrison.  It’s one of the English band’s major successes, appreciated by a lot of musicians, given the numerous covers that have been created.
Harrison decided to write the song taking his inspiration from the first words he read while flicking through any random book: “I picked up a random book, opened it, read ‘gently weeps’, closed the book, put it away and started writing the song,” the guitarist recalled  in an interview in 1979.
In another version of the song, with only Harrison on the acoustic guitar and Paul McCartney (it can be heard in the third volume of the 1996 Anthology), an additional verse was included which was then eliminated in the final version.
The song was in fact completely changed during the recording stage at Abbey Road Studios: thanks to the new eight track recorder, the Beatles reviewed While my guitar gently weeps entrusting the solo to the young Eric Clapton’s guitar.
George wanted that the guitar’s solo part actually resembled a cry, but he didn’t want to use wah-wah.  He gave it a lot of tries, but was never satisfied so he started to consider the idea of inviting Clapton, his friend since 1964, when he was still the guitarist of the Yardbirds.  Slow Hand was very surprised by the offer because no other musician until then had ever participated in a Beatles song.
Brian Gibson, sound technician, recalls how, “Eric demonstrated a perfect professional musician’s behavior, very calmly he arrived and played. That’s it, there were no theatrics or desire to make a scene. I remember Eric explaining to George that Cream’s method was to rehearse, rehearse, rehearse, spending little time at the studio, while he thought that the Beatles’ method was record, record, record, until they found the right version.  The sessions were their rehearsals.”
In his Sperling & Kupfer autobiography Clapton wrote about: “Sometimes I would go to George’s house to play the guitar and acid trip with him, and slowly, slowly our friendship grew. One day, at the beginning of September [1968, Editor's Note], George took me with him to the Abbey Road studios where he was recording.  When we arrived he told me they were recording one of his songs and asked me to play the guitar.  I was caught by surprise and it seemed like a strange request since he was the Beatles’ guitarist and had always done a good job on their records. I was also quite flattered since not just anyone gets asked to record with the Beatles.  I hadn’t brought my guitar so I had to borrow his.  It seemed to me that Paul and John were trying to belittle George and Ringo’s contribution to the group.  George proposed songs for each record and was continuously denied.  I think he thought that our friendship would have given him some support and inviting me along to play could reinforce his position and give him some respect.  I was rather nervous because Paul and John were sure of themselves and I was an outsider, but everything went well.  The song was ‘While my Guitar Gently Weeps’. It only took one take and I thought the result was fantastic.”
In 1992 Eric Clapton accompanied Harrison in what would have been his last world tour.  In 2002 he played the song again, with Paul McCartney on the piano, during the concert for Queen Elisabeth II’s Jubilee and at the Concert for George
Antonio Calvosa
Video, arrangement and choreography by Cirque du Soleil