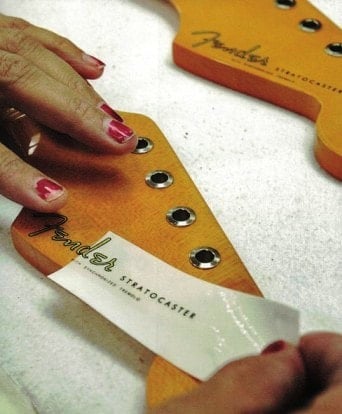 In general, Stratocaster headstock became slightly thicker, with substantial differences in 1963, 1967 and in 1971.

Comparison between the back face of the headstock of a 1954 stratocaster, with smoother shapes, and another form 1961
At the 1980 NAMM show Fender unveiled the Strat.  Its unique headstock, designed by Gregg Wilson, is often described as “atrophied” and not very attractive, and is frequently called Lead II headstock.
In the autumn of 1981, the small headstock was finally reinstated, although not quite the same as those made in the pre-CBS era.   It was first featured on the 1981 Standard Stratocaster, nicknamed Smith Strat, and thus it is dubbed Smith headstock by Fender enthusiasts.  It was later used on the 1983 Standard Stratocaster, on the Elite Stratocaster (Gold and Walnut versions included), on the 1982 and 1983 Strats, and on the first Vintage reissues.
The 1987 American Standard featured a new small headstock closer to the original pre-CBS shape, but only in 1998 Fender came back to the vintage-correct design, mostly thanks to the Master Builder Michael Stevens who inspected many pre-CBS Fender instruments.

Fender logo and other decals

The thick Black Logo (a.k.a. CBS Logo or TV Logo), black with a gold trim, first appeared in mid-1967 and remained unchanged until 1977, when its gold outline became slightly larger to the detriment of the black lettering.
With the advent of the Black Logo, a small circled “R”, standing for “registered”, was added right behind Fender logo and a significantly enlarged model's name and "WITH SYNCHRONIZED TREMOLO" decal in bolder lettering were used.  The decal "WITH SYNCHRONIZED TREMOLO" was finally dropped at the beginning of 1971.
​In late 1976, the serial number was moved to the headstock and the writing “MADE IN USA” was added under the word “STRATOCASTER”.  The "ORIGINAL Contour Body PATENTED" decal and the patent numbers were also dropped and a small circled “R” was also applied next to the "STRATOCASTER" name.
Until mid-1967, before the advent of the Black Logo, the headstock decals were always applied on top of the finishing lacquer.  In the late '60s, when Fender started to use polyester finishes, decals were applied before the clear coat and thus sealed under it, providing a more durable branding.  A new type of reverse decal, known as “C transfer”, which required a special solvent for its application, was used.
Some Transition logos were applied under the finish and remained almost unchanged over time, but others were applied on the top of the finish.  Hence, their metallic pigments oxidized over time becoming dark green, until they detached themselves from the subtle decal.
The new Modern Logo (a.k.a. Whitish Logo or Silver Logo), white with a black trim, first appeared on the headstock of the 1980 Strat.  In mid-1983, it was first used on the second version of the Standard Stratocaster (a.k.a. 2-Knob Stratocaster), although some of them with the old Black logo are known to exist.  With the introduction of the Modern Logo in the Standard Series, the “STRATOCASTER” lettering was considerably reduced, albeit larger than that of the pre-CBS Fender.
In 1995, when the serial number was moved on the back of the headstock, a new kind of Spaghetti logo, white with a black trim, first appeared on the American Standard and Plus Series, whilst the Vintage Reissue Stratocasters retained the gold Spaghetti logo, albeit without patent numbers.

Between the end of 1960 and January 1961 various patent numbers were also added on the headstock under the model's name:


It is interesting to note that not all these patent numbers refer to the Stratocaster.  For example, DES 169,062 indicates the design of the Precision Bass; 2,960,900 that of the Jazzmaster; 2,573,254 refers to Broadcaster pickup and bridge combination; 2,817,261 to the hum cancelling double coil of the steel guitars; 3,143,028 to the neck equipped with an adjustable truss rod.  Patent number 2,741,146 refers to the Stratocaster tremolo.

Fender widely used string guides, also called string retainers or string trees, to press down the top B and E strings with the aim of improving their tension at the nut and therefore to obtain a better sustain.
A circular string guide (a.k.a. button string guide) was screwed on the headstock of the Stratocaster until the second half of 1956, when it was replaced by that butterfly-shaped string guide, called wing or butterfly string tree.
In 1959, with the introduction of the slab rosewood fretboard, a small brass spacer was added underneath the string guide.  In mid-1964 it was replaced by an ABS plastic spacer.
By late 1971 Fender added a second string tree on the large CBS headstock to hold down the two middle G and D strings, although it is possible to find Stratocasters with only one string tree until 1972.
In the second half of 1983 the Standard and the Elite Stratocasters were fitted with two Ezy Glider string trees, made of a grooved steel to allow for a better strings vibration, which were used also on the American Standard Stratocaster unveiled in 1987.
​