It all started at the beginning of the last century when the first prime swing and jazz bands came into being.  Guitarists felt an ever growing need to compete with the loudness of other instruments.  So much so that to deal with increasingly louder music, bigger guitars with reinforced necks were built and musicians began using metal strings and larger guitar picks.  But it still wasn’t enough; if strummed the guitars could barely be heard, just imagine on the solos!
Electric guitars had not yet been developed and the idea of a louder guitar, but with a clear sound, was the obsession of an Italian luthier, Mario Maccaferri.
Luckily Maccaferri was able to meet Henry Selmer, owner of a musical instruments company with the same name, who was enthusiastic about the Italian luthier’s ideas, so they decided to design an innovative guitar together.
The first model, called “Concert”, introduced in 1932, was based on a kind of internal resonator and characterized by a D-shaped hole and twelve frets sticking out of its body, but it wasn’t very successful.  The next model, called “Orchestre” was instead much appreciated, above all by French musicians.  In 1934 Mario Maccaferri left Selmer but his guitar was further developed by other luthiers who eliminated the resonator and replaced the D-shaped hole with a small oval one, increasing the scale and number of frets outside the body to fourteen.
Almost all Selmers had a spruce top and laminated Indian rosewood  back, an ebony fretboard on a walnut neck, a metal tailpiece with a big “S” on it and a characteristic elongated ebony bridge.  These guitars had a distinctive clear and powerful sound.
Selmers aroused the interest of a lot of musicians between the '30s and '50s, above all in France where Django Reinhardt joined the centuries-old gypsy musical tradition of the Manouches with American jazz.  His style, which developed to compensate for the loss of some fingers, in a fire, on his left hand, is characterized by a distinctive technique using the right hand and large guitar picks.
The British luthier, David J. Hodson, who died in 2007, is well known among manouche jazz (or gypsy jazz) lovers as a builder of excellent quality guitars created in image and likeness to those used by Django.
Hodsons are all distinguished by a very fine top and back, covered by a thin layer of paint that highlights vibrations but at the same time makes them very sensitive to humidity, therefore, like all good quality instruments, they require great care.
My 503 SR has a nice 1.7 mm thick rigid top in red sitka spruce with regular dense grains on which the small oval hole and the typical ebony bridge stand out.  The metal tailpiece, in perfect gypsy jazz style, has the Selmer “S” engraved on it.
Its back and sides are in laminated Indian rosewood, characterized by a light brown colour with very dark streaks, on African mahogany, known as Kyha.  Inside the body there is a Big Tone pickup that amplifies the instrument. The almost flat fretboard is in smooth, dark ebony on a thick walnut neck which is slightly square-shaped.
Its headstock is well crafted in perfect manouche style and has golden Schaller tuners with plastic keys.
It has a definite retro style look, which is rather glamorous but also essential, as is required by the musical style for which it was created.  It is suited to being played vigorously: discreetly high volume but clear and distinctive notes characterized by a sort of natural reverb of the sound box.
The action isn’t exactly low, especially for those who are used to electric guitars, but it can be lowered, although Hodson itself advises against it.  These features together with its big neck and thick picks needed to strum the strings, doesn’t make it easy to play.  However, the 503 SR rewards you with notes that only the best manouche guitars can produce.
​ 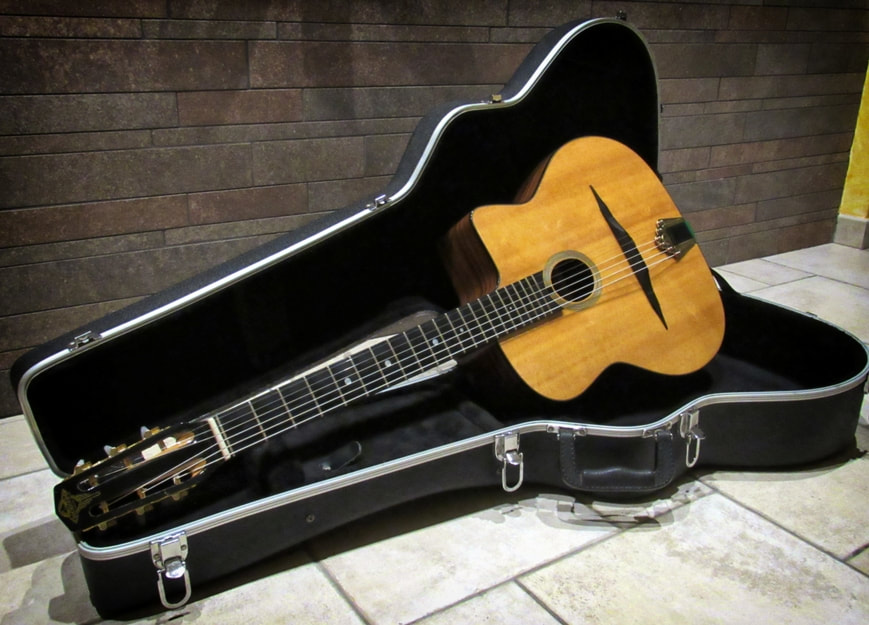 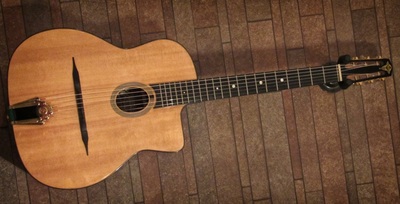 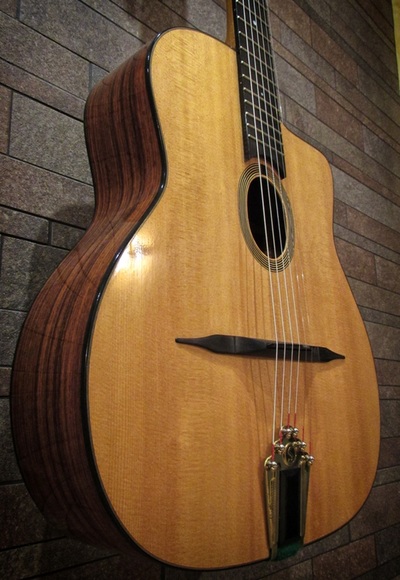 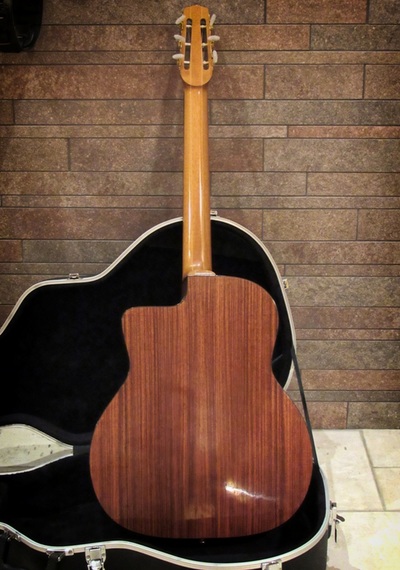 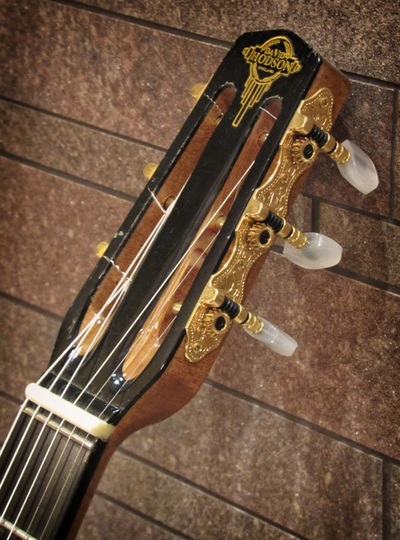 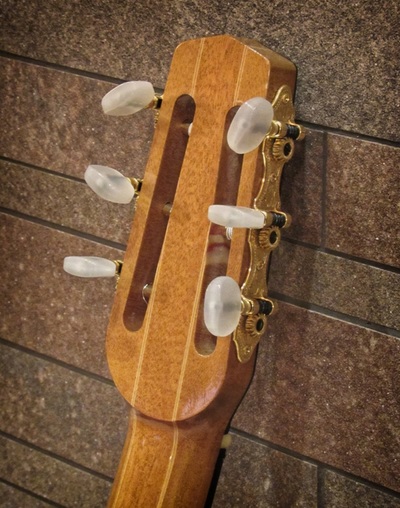 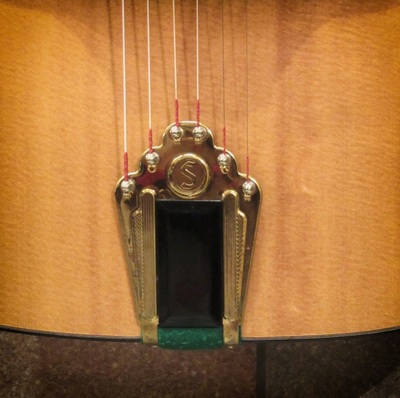 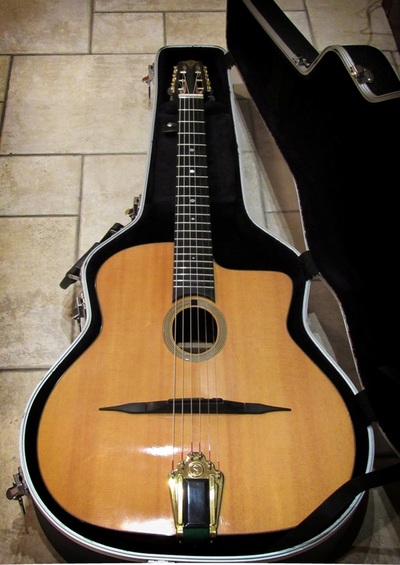 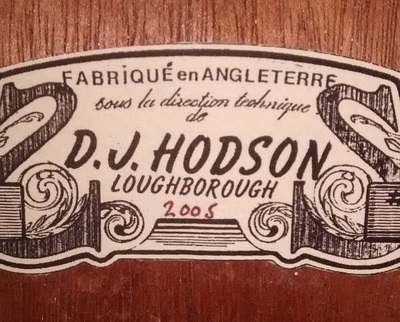 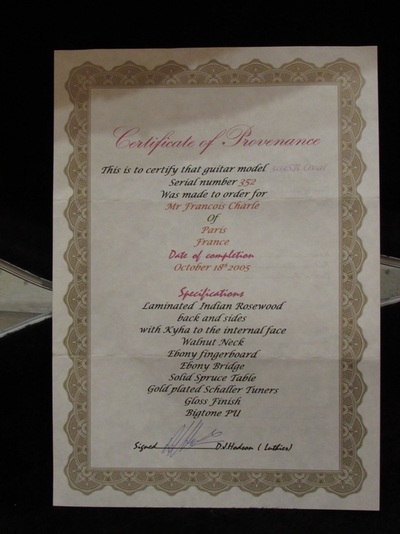 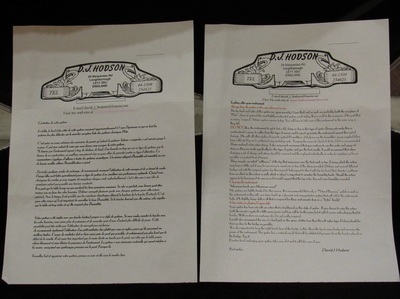 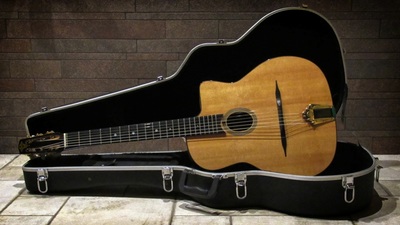