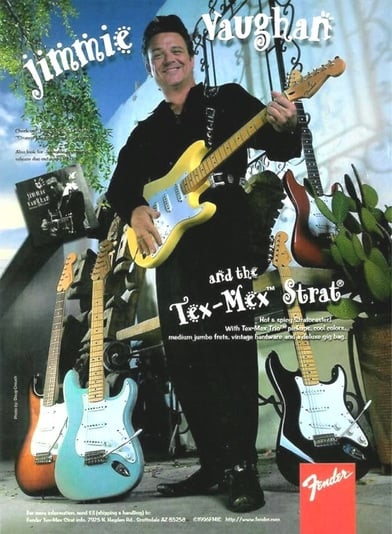 Tex Mex Strat advert with Jimmi Vaughan, 1996 Frotline
The Mexican Jimmie Vaughan Tex-Mex Stratocaster was a signature, unveiled in 1997, based on the Tex-Mex Strat (1996-1997).
​The Tex Mex was a guitar with a body that was made in Corona but sanded and finished in Ensenada.  It was composed of many poplar parts joined and hidden by a veneered top and back (at least in the sunburst models) and was equipped with economical but staggered and well balanced Tex Mex pickups.  These pickups were reminiscent of the Custom Shop Texas Special, but while these last featured top and bottom plates in vulcanized fiber, plain enamel windings, were dipped in wax, the Tex Mex were more like the Japanese economy pickups, with top and back in plastic, no immersion in wax, and overwound to have a hotter sound.  “They're very high output, very punchy, with a lot of guts.  But they still have the high-end sparkle that a strat should. They're extremely aggressive, but not over the top,” explained Mike Lewis, Fender Marketing Director for Guitars.
The Tex Mex Strat, with Kluson style tuning machines and six screw Synchronized Tremolo bridge, really gave the impression of a Stratocaster from the '60s, but its medium jumbo frets and almost flat fretboard made it more modern at the same time.
Struck by the quality of this guitar, Jimmie started talking to Mike Lewis at Fender about it as a possible base for his signature.  “I thought it would be a great idea to have one that was really affordable and a good guitar at the same time.  Since my friends and I are fans of the Mexican strats, I asked about the possibility of having a model from Mexico,” Jimmie explained.
Only a few changes were made to the Tex-Mex Stratocaster, among them the transition from a modern "C" shaped neck to a "special shaped" (later modified to soft "V") and the use of an alder body and a maple fretboard.
It is said that Jimmie, happy with the quality of his signature, asked Fender if he could visit Ensenada factory and he was amazed at the passion with which instruments were built by Mexican employees.  To thank them he therefore decided to organize a concert just for them.

In July 2018 Fender unveiled the Custom Artist ​Jimmie Vaughan Signature Stratocaster.  This instrument, born from the collaboration between the blues guitarist and the Custom Shop, differed from the factory series by a Jimmie Vaughan Custom "C" shaped rift-sawn maple neck, which reflected the preferences of the musician, and equipped with 57110 Jumbo frets.  The two piece alder body and the neck featured a lush Closet Classic nitro finish and the pickups were Custom Shop JLV's. 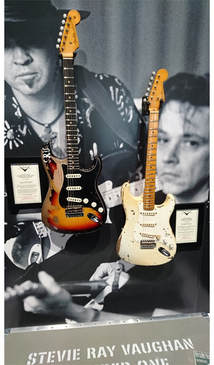 In 2018 the Custom Shop celebrated the two Vaughan brothers with 30 ​Limited Edition Jimmie Vaughan Stratocaster and 30 Limited Edition Stevie Ray Vaughan Stratocasters, all made by John Cruz, based on the guitars used by the two Texas Blues brothers.
The Jimmie Vaughan model, in particular, found inspiration in the first white Stratocaster that the guitarist bought from a friend at the end of the '70s for $245 and modified to his liking to imitate the Mary Kaye.  He then replaced the neck with one from the late '50s that Charley's Guitar Shop in Dallas had modified by substituting decals and replacing the frets with larger ones.  On the back of the instrument Jimmie applied, during a tour in Denmark, an upside down sticker depicting a pin-up girl.
John Cruz’s replica differed in that it had a body composed of two asymmetric pieces of alder with a heavy relic finish, to which he applied a monolayer parchment pickguard, and for a maple '57 "C" shaped neck with a 9.5" radius fretboard equipped with 6100 frets.
Antonio Calvosa
2018 Custom Shop Limited Edition Jimmie Vaughan Stratocaster (Courtesy of Fender)