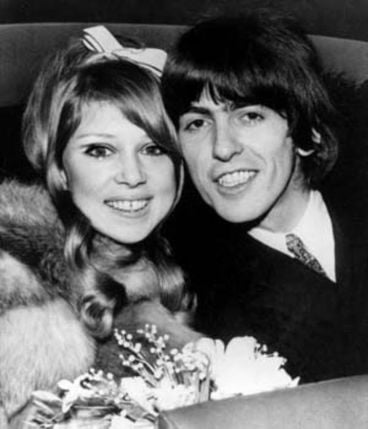 Pattie and George, 1966
Patricia Anne Boyd, known as Pattie, was born in Taunton, Somerset, on 17 March 1944. She was a British model photographed by famous artists such as David Bailey and Terence Donovan.  She worked mostly in London, New York and Paris and appeared in the Italian edition of Vogue in 1969.
However, she is mostly known for having been George Harrison's wife first, and then Eric Clapton’s.  Both musicians dedicated a lot of songs to her like:  Harrison’s Something, I Need You, For you Blue and Clapton’s Wonderful Tonight, Layla, Bell Bottom Blues. ​
Blonde, graceful, lively, Pattie was a man eater.  In 1964, at only 19 years of age, she was hired to play a student, fan of the Beatles, in the film A Hard Day’s Night, and she left the band’s guitarist thunderstruck.  Legend has it that one of the first things George said to Patricia was: “Would you marry me?”  A question that at the time all four Liverpudlians asked every beautiful girl.  The model just replied with a smile and George, who was in no way  discouraged, remarked: “Well, if you don’t want to marry me now, would you have dinner with me?”  But Patricia was already engaged to Eric Swayne and refused the first date with the Beatles’ member, telling him, however, that he was the most handsome man she had ever seen in her life.
A couple of days later, on the set, George asked her out again, but this time she accepted since she had left Swayne.  Their first date was at the Garrick Club in Covent Garden, also accompanied by Beatles’ manager, Brian Epstein.
In 1966, George Harrison and the 22 year old Patricia got married. 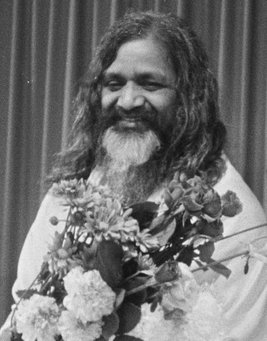 Maharishi Mahesh Yogi (photo courtesy GaHetNa - CC-BY)
It seemed like the classic, “...and they lived happily ever after….” relationship, but as soon as the Beatles reached the peak of their success, the first signs of tension appeared.
In fact, Harrison began to change profoundly, above all after the trip to India in February 1968 with the other Beatles’ members and their wives and partners at the time (Cynthia Powell, Jane Asher, Maureen Cox and indeed, Patricia Boyd).  They were there to do a Transcendental Meditation course at Maharishi Mahesh Yogi’s Indian ashram.
George had shown a strong interest in the elements of oriental traditions, for some time and had taken up drugs to try to “expand consciousness.”  During the trip he discovered a new spiritual concept and became obsessed with Indian religion and the art of meditation, which drove him further away from his wife.
Harrison’s alcohol and drug abuse as well as extra marital relations, among which Maureen Cox, Ringo Starr’s wife also stands out, considerably wear out Patricia (disappointed more by Maureen than George, to be honest) and also threw her into the arms of other men like Mick Jagger and John Lennon, who had always shown an interest in her.
The relationship between George and Pattie was at the end of the line when Eric Clapton suddenly barged into it.  He was a great friend of George Harrison’s and had met Patricia at a party.  Slow Hand fell madly in love with her, completely losing it.  His attempts to get close to her were many and varied, even presumed flirting with Pattie’s younger sister, Paula Boyd.
It is actually for Pattie that Clapton wrote the very famous, Layla in the Spring of 1970.
The song’s title comes from Majnun and Layla, an Arabic folktale based on the true story of a young bedouin poet called Qays ibn al-Mulawwaḥ and his love for Layla al-Āmīriyya to whom he dedicated numerous poems.  There are different versions of this story, but in all of them the poet goes crazy (from which “majun”, comes as it means “crazy”) when Layla’s father prevents her from marrying the poet and promising her to another man. 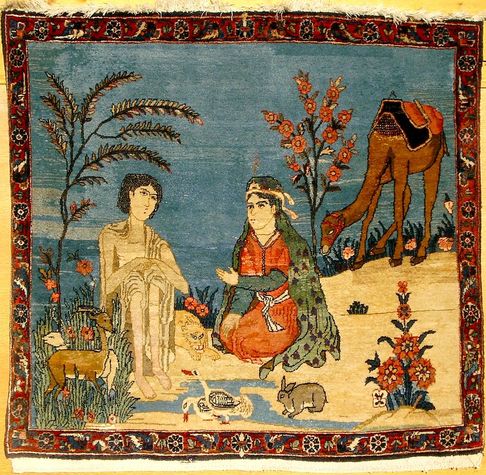 Keshan Carpet che rappresenta Layla con il suo Folle (Di Arie m den toom - eigen werk / selft made, CC BY 3.0, https://commons.wikimedia.org/w/index.php?curid=3508955)
The most well known version is the Persian poet, Nezami Ganjavi’s, in which the young lovers can’t get married because of a family feud.
“Love came and filled the goblet of wine for them.  When they had plucked the perfumed rose of love, they wanted to savor its perfume every day: one enraptured by the beauty of the other, their hearts stunned but without losing their consciousness, hopelessly in love with a yearning that never died out”.  Layla is “a moon, a doll, a tender towering cypress”; Majnūn has “ruby lips that shed pearls.”  Together, they form the archetypal couple of extreme love, from passion to madness, reminding us of the story of Romeo and Juliet.  Like them, Laylā and Majnūn’s love is opposed by the world, that wants to destroy it by any means.  But it will not succeed, because “love is that which has no end.”  Thus separation and absence are transformed into mighty catapults of passion.  Majnūn, the “Crazy in love”, wanders day and night singing verses, the thorns of the desert tear the flaps of linen and silk of his clothes, but his mind’s eye is always fixed on the same fire.  His amorous delirium drives him to perennial motion, “like a blue robe of mourning that floats in the waters of a deep river”.  Mirroring his wanderings, Laylā remains in the center of the garden, both a prisoner and exiled, “full of grace and charm.”  But “within, her heart was bleeding,” her thoughts are fixed on her unapproachable beloved, while she is surrounded by “wretched hearts which by the thousands had fallen into the pit of the dimple on her chin”.  Neither war nor forced marriage can suffocate the ardor of the two lovers, although they are forced to be “satisfied with ghosts, and ghosts themselves.”
The story touched Clapton so much that he associated it with his relationship with Pattie Boyd. The song, played with Derek and the Dominos, had two parts: the first with Clapton and Duane Allman’s guitars, and the second, played by Jim Gordon’s very recognizable piano coda.
Patricia, although very impressed by this intense dedication of love, at first didn’t give in; her first reaction, once she realized the song was dedicated to her, was to say to Clapton:
“Are you crazy? I’m married to George!”  He then took an envelope out of his pocket and showed it to her: “If you don’t run away with me I’ll take this.”
“What is it?” asked Patricia.
“Heroine,” was Slow Hand’s answer.
“Don’t be stupid!” She scolded.
Nevertheless, her relationship with George, who continued to abuse alcohol and drugs, didn’t improve and in 1974 the English model decided to leave the Beatles’ guitarist for Clapton.
George Harrison, who by now new that his relationship with his wife had become irreparable and that both were ready for a new life, maintained a good relationship with Patricia after their amicable divorce in 1977.  The friendship between the two musicians wasn’t strained at all either, and George never had hard feelings towards his friend Eric; if anything, he was happy about the real feelings him and Patricia had for each other and was present at their wedding in 1979.
I walk through walls, Layla’s walls
And kiss this wall and this other
The love that conquered my heart is not for the houses
But the one who in these houses lives”
(Extract from one of the poems attributed toQays ibn al-Mulawwah)
Antonio Calvosa & Michele Oliveri