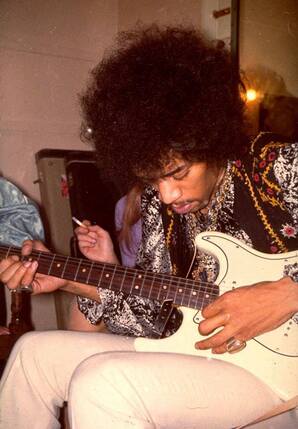 One of the last songs composed by Jimi Hendrix, before his death in 1970, is the less known Send my Love to Linda.  The “Linda” who he is referring to is Linda Keith, an attractive English girl of Jewish descent who worked as a model for Vogue.  To fully understand her role in Hendrix’s life we need to take a leap into the past, 1966, when the model, then engaged to Rolling Stones’ Keith Richards, leant to the still unknown Jimi Hendrix, the white Stratocaster that accompanied him to the dawn of his success.
The model was in the USA to follow the Rolling Stones on their fifth tour in three years.  It was the first time she saw Hendrix, at the Cheetah Club in New York and she was thunderstruck.  He looked horrible: straightened hair, large shirt, flared pants that were too short and holes in his shoes.  The band he was performing with was not exceptional, but Jimi played that guitar like nobody she had ever seen before.
At that time Hendrix “had to” play with Curtis Knight and his Squires because he had pawned his guitar, he no longer had one and always borrowed Curtis’s for their performances. However, this band was too “conservative” for Hendrix’s exuberance and flair.  So Linda lent him the 1963 Stratocaster Olympic White (serial number #L08573) that Keith Richards had left her and she invited him to her flat to listen to Tim Rose’s version of Hey Joe, a blues piece written by Billy Roberts.
​
With his new guitar, Hendrix, who was Jimmy James at the time, cut himself loose from Curtis and formed his own band: Jimmy James and the Blue Flames.
Linda, fascinated by Jimi’s playing, decided to help him emerge.  Her first thought was obviously to introduce him to Keith Richards. However, their relationship had begun to deteriorate, mostly because of the drugs the girl had started using more and more; furthermore, Keith had already heard about Linda’s relationship with this new American guitarist, making him jealous (it was because of his break up with Linda Keith that Keith Richards wrote Ruby Tuesday).
So Linda tried, unsuccessfully, firstly with Andrew Oldham, her best friend Sheila Klein’s boyfriend and manager of the Stones, and then with Seymour Stein, the producer who later discovered Madonna, by inviting them to Hendrix’s performances.
Nevertheless, the turning point arrived on 5 July 1966, when Linda invited the bass player of Animals, Chas Chandler, to the Cafe Wha.  He had decided to stop playing to pursue a new career as manager. As soon as Hendrix got onto the stage and began playing Hey Joe, as no one had played before, the notes permeated the place.  Chas was immediately enthusiastic: this new version was more aggressive than Billy Roberts’ old blues one and had all the trimmings for becoming a successful single. He then decided to take Jimi Hendrix under his “wings” and convinced him, by promising to introduce him to Eric Clapton, to go to London where the guitarist’s talent exploded in the world of rock stars.
In the meantime, Keith Richards (jealous) told Linda’s father that his daughter was heading for a  slippery slope and had started using drugs. “He told my father to come and get me. When he walked into the Cafe Au Go-Go, I thought, 'God, that looks like my father'. He took me by the arm and marched me out,” recalled Linda later on.
Now (2020) the guitar belongs to the French collector Armand Serra.