The birth of the Yngwie Malmsteen Stratocaster and the Play Loud

The birth of the YJM Strat 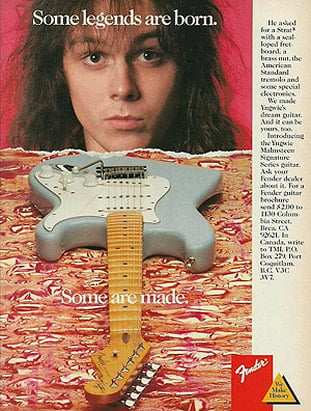 YJM Stratocaster advert, Fender Frontline
The Yngwie Malmsteen Stratocaster, also called YJM Stratocaster, has been the second Stratocaster signature to be made by Fender. George Blanda started to work on this project since November 1986, two months before Michael Stevens and John Page arrived at the Corona factory to organize the Custom Shop. In that period the development of the American Standard and Clapton Stratocaster was at an advanced stage. George Blanda remembers that he and Dan Smith met the Swedish guitarist after his concert in Long Island to decide the specs of the guitar together. «Let me show you something that you obviously have forgotten!», Yngwie said showing the two Fender men his vintage Stratocaster contours. George and Dan had brought some American Standard Strats with them that the guitarist liked a lot; in particular, Yngwie appreciated the new 2-Point Tremolo, which he decided to mount also on his signature. However the guitarist asked to change the contour of the Stratocaster, whose body in that period featured the soft lines of the last “Fullerton era”, with a more squared one that, since then, Fender would have adopted also for the American Standards made in the Corona factory.
In January 1987 all the notes of George Blanda and Dan Smith arrived at John Page’s and Michael Stevens’s Custom Shop (which hasn’t been officially presented yet) for the construction of the new prototype; however, the production of the new Stratocaster started only towards the end of the year. If you think about Malmsteen’s technique and virtuosities, you might expect a guitar based on a Superstrat, as it was fashionable among the guitarists of the '80s. Instead, the starting points of this signature were the most classic among the Stratocasters, as George Blanda stated: «Yngwie is a traditionalist in many ways. It was important to him that all the Strat body contours matched those of his '50s Strats.
But the neck was something else. Scalloped fingerboards are an integral part of his techniques. So, for him it had to have the vintage look with his special neck». In fact Malmsteen, inspired by his guitar hero, Blackmore, had lowered the central pickup (which he didn’t use) to the pickguard level on his personal guitars and, together with his technician, had dug the wood between the frets, because he was persuaded that this, by subjecting the fingers to less friction, would have allowed to play faster: «The idea of a scalloped fretboard is that, because you’re not going all the way down to the wood when fretting, you can play with a lighter touch. This means less effort for each note, and less tension (if you’ve been reading my blog before, you’ll know how bad tension can be for your playing)! It also means less friction when bending notes, as the string is only going along a smooth fret and not the wood of the fretboard». It was therefore obvious that his signature had the scalloped neck.

The first series of his new signature was equipped with Di Marzio HBS-3 pickups at the neck and at the bridge and an American Standard Strat pickup, reverse winding/reverse polarity and lowered to the pickguard level, in central position. The Di Marzio HBS-3 pickups were stacked coil as the two coils were one above the other, unlike what happens in the humbuckers in which they are placed side by side; yet like these they are hum-cancelling, although maintaining the typical sound of the single coils.
A tremolo bridge like that of the American Standards, a special “U” shaped neck with truss rod adjustment at the neck heel and TBX were other distinctive features of the first version. The Swedish guitarist also required a brass nut to make the sound slightly brighter and slide the strings better; at first Fender found the request too expensive, but in the end Yngwie was satisfied. The instrument was available both with maple and rosewood fretboard; the available finishes were Sonic Blue, Candy Apple Red and Vintage White (much more yellowish than expected).
Fender described the novice ​Yngwie Malmsteen Stratocaster with these words: “Swedish guitarist Yngwie Malmsteen first hit the U.S. music scene through a Guitar Player Spotlight column and from there, hit the ground running. From his days in the 80’s rock scene to sold-out performances showcasing his classical influences and prodigious technique, Yngwie has remained truly one of a kind”. It is curious to note how the photos of the prototypes, used for the presentation of the new signature, exhibited an eleven screws (one above the central pickups) pickguard, while the Malmsteen Stratocasters that entered the market had still an eleven screws pickguard, but in the pre-1963 configuration. ​And not only that: the first tuning machines were Di Marzio branded, replaced by Kluson style ones during 1989.

Between the 1990 and 1994 Fender Japan exported the Yngwie Malmsteen Standard Stratocaster, which differed from the American version for the '70s style big headstock with “G” Gotoh tuning machines, the basswood body, the differently scalloped fretboard, the “U” shaped and gloss finished neck, the different pickups, no TBX and black pickup covers, switch tip, tremolo arm tip and knobs. In 1990 the bridge was the 2-Point American Standard tremolo, that was replaced by a CBS style bridge from 1991 to 1994. Few models was in Surf Green finish (not a faded Sonic Blue), although this color was never reported on the Fender catalogs.
​In 1994 other models made in Japan intended only for the Japanese market appeared; they still had basswood body, could be distinguished for the vintage style tuning machines, only one string tree or the eight screws pickguard, and remained in production for many years. It is interesting to note that in Japan other two Stratocasters domestic with scalloped fretboard but without Malmsteen’s signature on the headstock, named ST71 SC and ST72 SC, on which “SC” stood for “scalloped”, were made together with a model with nylon string, the STCL-140YM.

The MIJ model with nylon strings: the STCL-140YJM (courtesy of Nicola Lombardi)

Fender modified the Yngwie Malmsteen Stratocaster three times: in 1998, 2007 and 2011. Though some distinctive features as the scalloped fretboard - which since 2007 became more pronounced, especially in the final part - and the brass nut - that since 2007 was lowered to improve the action - were maintained, the new series were quite far from the 1988 one. In fact, the big headstock in CBS style wanted by Malmsteen, who was persuaded that it would have increased the sustain, the much larger frets, and the new Di Marzio YJM pickups in central position and at the neck (while the Di Marzio HS-3 was maintained at the bridge) were introduced. In 1998 the BiFlex truss rod appeared on the headstock and, since 2007, the Bullet truss rod; the frets became much larger, the butterfly string tree replaced the Ezy Glider one and the six saddles Synchronized Tremolo took the place of the 2-Point Tremolo. The pickup selector went from 5 to 3-way, the TBX was removed and the No Load Control was introduced: this mechanism allowed to completely exclude the tone control from the circuit when the knob was in position 10 and, according to the Swedish guitarist, it could slightly increase the output of the pickups.
In the ​Second Series of 1998 the pickguard changed to Mint Green and the position of the screws was modified to the modern configuration; since 2007, with the Third Series, Fender had opted for a clearer Aged White pickguard and a Vintage White finish even more tending to yellow than the previous version. Moreover since 2007 Malmsteen Stratocaster neck had been anchored to the body through the Machine Screw Neck Mounting Inserts, sort of metal inserts placed inside the neck.
​In 2011 the stacked coil Seymour Duncan YJM Fury pickups took the place of the Di Marzio ones. These pickups were designed in collaboration with Malmsteen himself, who, after having tested about twenty prototypes, found the desired sound in them.

YJM fourth series (Fender.com)
Comparison of the palettes of the four American versions. Only the third and the fourth US model had the bullet truss rod; the first series had the vintage style truss rod from the headstock, while the second series featured the Bi Flex truss rod. The first series also stood out for its Kluson-style tuning machines and for the Ezy Glider string tree, which in the other series is replaced by a butterfly one. 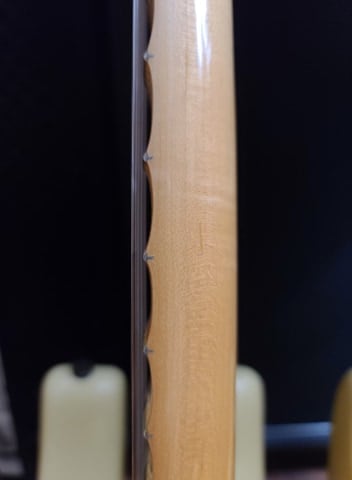 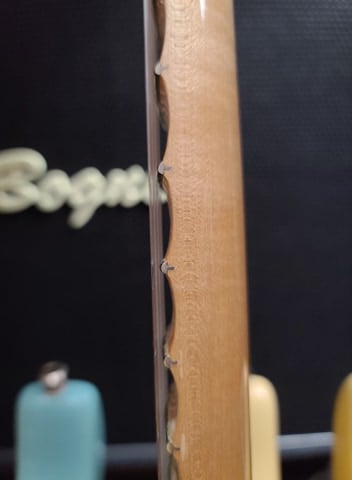 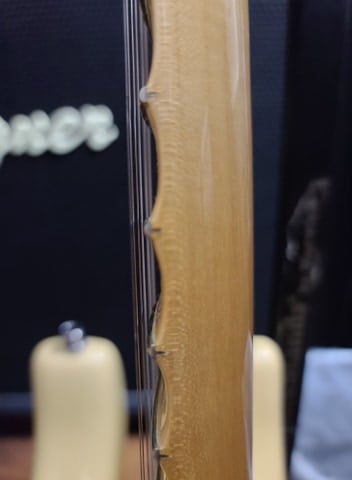 4th US Series, 2014
Comparison between US YJM fretboards. The scallops on the US models got deeper with each new model. The first US model had the most shallow scallops and also smaller frets (Courtesy of Brandon Brizzee)

In 2019 the Custom Shop unveiled its Custom Artist version of the signature, named ​Yngwie Malmsteen Signature Stratocaster, which differed from the factory for a select alder and nitro finished body and for a maple cap, obviously scalloped and Custom “C” contoured neck.

In late 2008 Custom Shop master builders made 100 Yngwie Malmsteen Tribute Stratocasters, relying on the 1971 Stratocaster of the Swedish guitarist, also called​ Play Loud or The Duck due to some of the many adhesives applied (and sometimes also removed) during the years on the original guitar, among which the white one on which was written by hand "PLAY LOUD" or the faded one depicting the Ferrari symbol in the back of the body.
The Play Loud exhibited at the beginning an Olympic White finish which over time had definitely turned yellow and showed many signs of wear accumulated after years of recording and live (it retired in 1992), reason why master builder Jason Smith described it «one of the most beat-to-crap guitars I've ever seen in my life. That thing had seen a lot of abuse».
The fretboard was scalloped by Yngwie himself when he was fifteen, although the result was not optimal and John Cruz defined it «crude, not too pretty».
The 4-bolt neck plate was characteristic of the Play Loud; it was applied on a guitar born with a 3-bolt with tilt-neck, so that it was possible to see at the base of the plate the original hole for the Micro-Tilt; the neck pocket no longer had the metal disc for adjusting its inclination and the hole was professionally filled with wood.
The electronics was very special: it featured the Di Marzio HS3 prototypes at the neck and at the bridge (although it had previously used other pickups too, like the Di Marzio FS1), while at the center the guitar featured a '70s stock pickup that Yngwie had completely disconnected; moreover, also the tone controls had been detached from the circuit: : «The circuit is basically the neck and the bridge pickups, a volume control, the output, and that's it», as John Cruz stated in an interview with Guitar World.

Finally, the "Yngwie Malmsteen Signature Double Neck Stratocaster" STW-230 YM should also be mentioned; it had been made by the Japanese Custom Shop since 1995 for the domestic market and remained in production for a few years. The guitar featured two scalloped necks, one with twelve strings, the other with six, that could be mixed through a knob positioned below the pickup at the bridge related to the twelve-string neck. Basswood body, Kluson Style slotted tuning machines, brass nut and DiMarzio HS-3 stacked-coil pickups at the neck and at the bridge, while the central one was made in Japan.
Antonio Calvosa
​