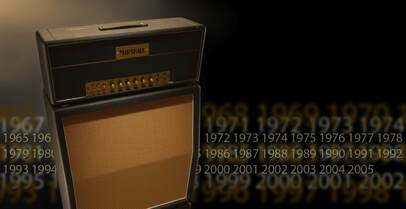 For the most part it's really quite easy to date Marshalls, either by using the serial number or by studying the cosmetics. From a dating point of view they fall into three groups: 1962-1964; 1965-June 1969; and July 1969 onwards.
Please remember, however, that the Marshall dating system only applies to amplifiers and combos, not to speaker cabinets; but if you are trying to date a speaker cabinet from mid-1969 or earlier, you can always try and use the Celestion date code. Unfortunately, unlike many American amplifiers, Marshalls use no date-coded parts other than the Celestion speakers, so don't bother inspecting the pots or other parts for dating information. However there is a pretty good chance that speakers on the old Marshalls are not the originals; or if they are, they're perhaps not in original condition. If you have a 2x12 or 4x12 and the cone numbers are different, they may have been reconed. If there is excess glue on the surround, then a recone is even more likely. If the date codes differ by much more than a month (most of the original Marshalls I have seen have used speakers made within days of each other), then the chassis have probably been changed; this means that the date code can only be relied upon to date the speaker, not the amp!

Marshall's first prototypes had no model codes or any official serialization. Cosmetics are the most obvious clues here; items such as the old block-style Marshall logo, vinyl, grille cloth, output tubes, type of panels and knobs, etc., are the easiest and quickest way of estimating the date. Many of these amplifiers had an offset chassis.
After these came the first production amplifiers, starting at number 1001, which was Ken Bran's idea, so that it would look as though they were building thousands more amplifiers than was actually the case! These numbers were scribed or stamped into the back panel of the chassis, and sometimes also included the model type, such as PA, Lead, or Bass.
They continued to number them sequentially in this manner until the beginning of 1964, when they started at 2001 and so on, with the "2" indicating the second full year of manufacture. This very convenient method ended around 1965, when all of the white and black sandwich type of panels were used up and Marshall changed over to the cream or gold Plexiglas style.
If you've got some Alnico Celestion speakers and for some reason the date code has rubbed off, then look for a “Marshall” sticker on the back. If it's the silver “Uxbridge Road" version, then it was made between September 1962 and mid 1964; if it's the gold “Silverdale Road” one, then it was made between mid 1964 and 1966.

These are the hardest to date of all because the serial numbers were applied seemingly at random, so the year can only be guessed by the cosmetics and certain electronic features. This era saw the advent of Plexiglas panels and four-digit model number that can be somewhat confusing because model numbers such as 1987 or 1959 can be mistakenly interpreted as the production year of the amplifier.
1965 and 1966 amplifiers had cream back panels with gold printed serial numbers.
​
With the arrival of gold back panel in 1967, there were three different styles of serial number: the "window" style, the screen printed (from the back) style, and the stamped style.
If for some reason you are in any doubt about the model type of an amplifier, then it's interesting to know that from around 1967 onwards the model type can be determined by the "Model Code" that prefixes the serial number, and those prefixes are as follows:
/A          200W
SL/         100W Super Lead
SB/         100W Super Bass
SP/         Super PA
ST/         100W Tremolo
T/          50W Tremolo
S/          50W
​

Marshall introduced their date coding system (and aluminum back panels) in July 1969, which means that you can at least date your amplifier to the year of manufacture. To get more accurate than that, you may be lucky and find an inspection sticker attached to the top of the chassis, which sometimes states precisely the day, month, and year of manufacture.
Serial numbers are located on the back panel (although some amps made between 1979 and 1981 also have them on the front panel), and they are divided into three sections: "Model Code", "Serial Number", and "Date Code".
The Model Code was slightly changed from the previous years, but the codes listed below are not nearly as reliable as their predecessors, since I have seen both codes used right up until the early seventies. Also, they weren't so studiously applied by Marshall when the JCM 800 series was launched, and not used at all on the JCM 900 amplifiers.
MODEL CODES
A/        200W
SL/A      100W Super Lead
SB/A      100W Super Bass
SP/       Super PA
ST/A      100W Tremolo
S/A       50W
T/A       50 W Tremolo
RI        Reissue

While from January 1984 to October1992, the serial number would look like this:

The only exceptions to these rules are the 30th Anniversary Limited Edition brass-plated amplifiers, which were numbered sequentially from "001" to "800" and had a cast plate screwed into the top of the chassis.
​

In October 1992 Marshall finally introduced their bar-coding system, which has the advantage of giving much more accurate information than the old serial numbers, but has the disadvantage of being attached to the amplifier with a sticker rather than being stamped in, as was previously the case.
The new bar code number has nine digits that break down into three sections (year, serial number, and month) and here's an example of how it works.

Note: On some special-editions amps, or amps that were parts of a package (denoted by a “P”), the third character was a letter: For example: 96P123420