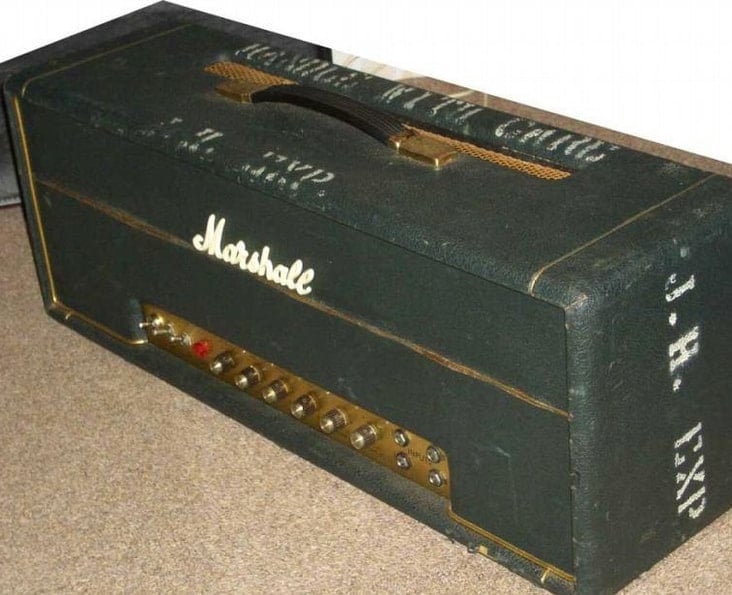 Towards the end of '67 the first JMP 100s were launched, named with the new acronym, which stood for “Jim Marshall Product”, and replaced the old JTM (Jim and Terry Marshall) on the front panel when Terry and his friend Mick Borer left the company.
The very first JMP 100s were basically identical to the Black Flags.  However, almost immediately the diode rectification reverted from dual to single and the Drake power transformer was replaced with the slimmer, quieter Dagnall T2562, resulting in a more compressed and sharper sound.  Most early JMP100s used the Drake 1202-132 or sometimes the Drake 1202-119 or the newer, harsher sounding Dagnall C1998 as output transformer. The choke was usually the Drake 352-114, but some of these amps featured a Dagnall C1999 or even a Radiospares 20H.  Some, especially those intended for the US market, even had a polarity switch on the front panel.
The advent of Dagnall represented a moment of crucial importance for Marshall, which was catapulted into a new era, with decidedly “heavier” sounds if compared to those of the previous Drakes which were warmer and blues.
The JMPs were seen numerous times between the end of '67 and '68 in Hendrix’s concerts and, in the studio, in his Wheels of fire in BBC Session and, in the version with polarity switch, in Clapton live.
In '68 the change of serial numbers in the Marshall amplifiers emphasized the introduction of a new preamp circuit of the Superlead, called “split cathode”, which led to increased distortion and volume, with a relative decrease in headroom and a greater gain in the mids and treble.  In addition, the first channel was now much brighter, sharper and more biting, with a more decisive attack and characterized by bass with less gain than the second channel, which was very dark and more “gainy”.  The output transformer was now the Dagnall C1998, while the “laydown” Dagnall T2562 was the power transformer.  The choke could be the Drake 352-114 or the Dagnall C1999. With the shift to the Dagnall, the amplifiers had a markedly more rock sound and were more devoted to soloism, becoming also more aggressive, decisive and able to reach higher volumes. Even the tremolo version featured the new circuit, while the Bass and P.A. versions instead remained with a preamp similar to that of the old JTM, called “shared cathode” - although, still using the Dagnall transformers, their  sound  was rawer and harder.
At this time the cabinets and Greenbacks also changed, they now had slightly higher wattage, which seemed to fit better with the new amplifiers.

JMP chassis
One of the most important users of the 1968 Superlead was Edward Van Halen, who was able to achieve even greater distortion by using Variac and Sylvania EL34 tubes with the bias set to achieve greater gain.
Also famous was Jimi Hendrix's performance at Woodstock with a set of JTM100 Superleads linked together.
Towards the end of '68, with the aim of reducing noise, a new chassis was introduced in which the output transformer was rotated 90° and away from the power supply.  At the same time some other changes in filtering, resistors and position of the preamp filter cap, led to a slight variation in the tone of the JMP, especially in the first channel.  These new JMPs sported the serial number preceded by the suffix “SL/A” on the rear panel, unlike the old JMPs that were preceded by the suffix “SL”.
In addition to Hendrix, this type of JMP was also used by Jimmy Page.
In 1969, the latest versions of the JMP plexi panel mounted the Dagnall power transformer vertically and no longer horizontally.
Towards the end of 1969, with the introduction of the aluminum panel instead of Plexiglas, the Plexi era ended and the “Metal Panel” era began.
In 1971, the Dagnall C2668 output transformer was introduced, leading to an even brighter and more aggressive sound.  There was a further change in the look of the cabinets and the new Creambacks and Blackbacks were launched, and in 1973, Marshall began using printed circuit boards.  The first metal panel amps are often associated with AC/DC and Thin Lizzy.