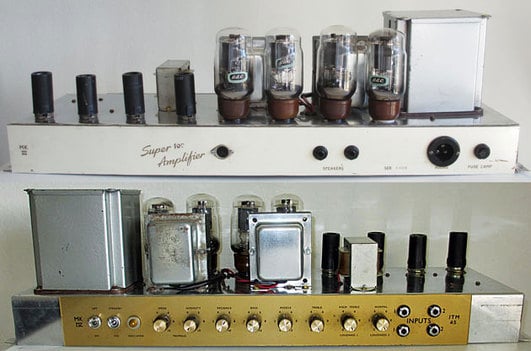 In mid-1965, under the guidance of Jim Marshall, Ken Bran, Dudley Craven and Ken Flegg, work began on the first 100-watt Marshall. It's no mystery that it was built at the request of Pete Townshend who needed more power and feedback.
Unfortunately, after the Who, Cream and the Jimi Hendrix Experience contributed to the launch of these new head units, Pete Townshend had  a disagreement with Terry Marshall and left Jim's amplifiers to move onto Hiwatt after a brief period with Sound City.
These first 100 watt amps are known today as JTM45/100 because they had the same Plexiglas control panel as the JTM45 (also bearing the label “JTM45”) on a slightly larger chassis which was able to accommodate four KT66, as well as a rear panel on which the label Super 100 Amplifiers, stood out. ​
​

Obviously the starting point was always the same circuit as the JTM45.
In a first, totally experimental prototype, Craven and Bran used a GZ34 (5AR4) rectifier tube, four 6L6 (5881) power tubes, and three 12AX7 (ECC83) preamp tubes, resulting in about 60 watts of power, but the Radiospares DeLuxe output transformer, the largest Jim could buy that could handle 30 watts, tended to melt easily with this power.
In the second prototype they preferred two GZ34 rectifier tubes, four 6L6 power amp tubes, and again three 12AX7 preamp tubes.
However, the clear step forward to better management of the amplifier’s power was marked by increasing the number of output transformers from one to two, still Radiospares, so that each transformer had to deal with only two final valves.
They seemed to be on the right track.  In fact, the third prototype was the final one.  The 6L6s were dropped in favor of the larger KT66s, while the pair of Radiospares transformers were replaced with a pair of the new Drake 784-74s rated at 50 watts each, as 100-watt transformers did not exist at the time.  In addition, the "inefficient" rectifier tubes were replaced with silicon diodes Texas Instruments TS107, which greatly changed the sound of the new amplifiers.
​​

In the second half of '65 the production began of the first Marshall 100 watts amplifiers with two transformers, which were nicknamed Dual-Output. These amplifiers featured the large Radiospares Hammertone as power transformers, four KT66 power tubes, two Drake 784-103 output transformers and a Radiospares 20H choke.  They were connected to cabinets that featured Celestion Silver Alnico speakers.  The result was an amp that was great for blues and classic rock.  Their estimated power output was, at the breakup point, about 70 watts, reaching peaks of over 100 watts.  The very first Dual Outputs were characterized by an aluminum chassis that was often deformed or broke with the weight of the transformers.  As already mentioned, the front panel was “borrowed” from its “cousins” JTM45, so it still bore the label JTM45, and had a luminous led rounded yellow Radiospares like that of the JTM45.  Early amps still had the Marshall block logo.
It is estimated that there are currently twelve Marshall Dual Outputs, including the third prototype.​​
This new amplifier was available not only in Lead (1959) but also in Bass (1992) and, a little later, in Super P.A. (1968) versions.  In need of a different panel with eight inputs, the Super P.A.  version had a golden plexi front panel with the labels “JTM100” and “MK V”.  On the back panel, which was white, most of the Super P.A.'s had instead stamped on them “Super P.A. Amplifier” and, strangely enough, “MK III”.
For a short period the Super Tremolo version was also produced, the T1959, but it did not have great success, although it was widely used by Townshend.

In September '65 thanks to the new Drake 1202-84 100 watts output transformer, Dual Outputs were dropped in favor of a new JTM45/100 with a single output transformer for the four KT66, sometimes called Single-Output Transformer.  Initially these new amplifiers featured the classic Radiospares Hammertone as power transformer and Radiospares as choke. The front panel in gold plexiglas always bore the label JTM45, while the LED light was sometimes rounded yellow, sometimes squared red.
​

In February '66 the new Drake 1204-43 power transformer replaced the big Hammertone and the choke Drake 352-114 took the place of the Radiospares 20H. The wattage was about 80 watts at the breakup point, while the particularly high voltage (560V at the plates and 559V at the screen) put a strain on the new Chinese or Russian-made KT66 tubes.  The new tubes also had difficulty supporting the high preamp voltages.
In the latest the aluminum chassis was reinforced at the sides, just as happened to the latest units of the JTM45.
The first speakers with which they were associated were the Celestion Greenbacks G12M (20 watts) and later, by choice, also the Greenbacks with a heavier magnet, the G12H (probably 55Hz).
In contrast to previous models, this second version of the Marshall JTM45/100 Single-Output had more power, a stronger attack, and more headroom; the bass was pronounced but the overall tone was clearer than its predecessors’.  However, the bass still had a predominant characteristic and guitarists often turned the bass knob down quite a bit when playing at high volumes.  The blues characteristic was still evident, but not as pronounced as on the JTM45.  On the bright channel you could get the classic Hendrix tone, on the second channel, the normal channel, a Clapton style sound emerged.
All these Super 100 Amplifiers, in the years '66-'67, were widely used by Eric Clapton both live and in the studio in Fresh Cream and Disraeli Gears, by Malcolm Young of AC/DC in Ballbreaker, by Paul Kossoff of Free and, of course, by Pete Townshend.  Jimi Hendrix also used it a lot in live performances; Are you Experienced? is said to have been recorded with a JTM45/100 equipped with a single Drake 1202-84 output transformer. 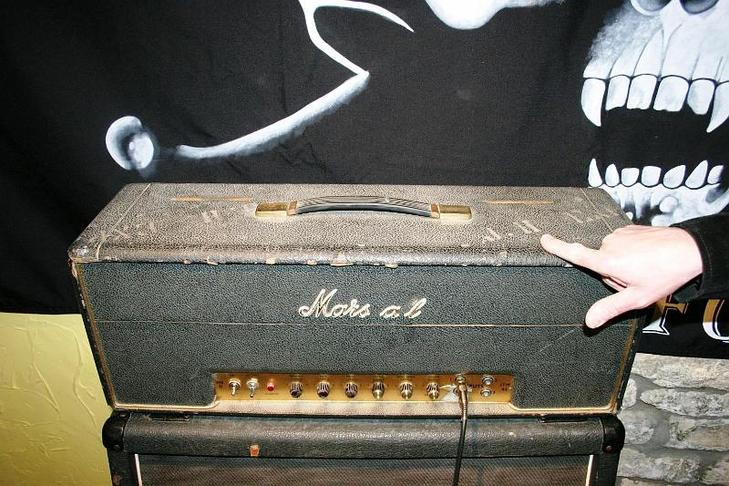 '67 was a year of transition: Drake 1202-119 output transformer was introduced, but above all, due to their availability problems, the KT66 were dropped in favour of Mullard EL34.  The power transformer remained the 1204-43.  The result was not only an increase in power (115-120 watts) and volume, but also a raw and more aggressive sound, great for crunch, a little less for clean and blues than the previous ones.
​

Towards the end of spring 1967, with the use of the Drake 1203-80 power transformer with a lower voltage, but especially with the introduction of two different voltage-doubler (bridge) rectifiers, the first Superlead models (1959) were launched which were, characterized by the new 5000pf bright cap that gave a more aggressive sound, and those Superbass (1992), which had the same circuit as the Superlead but without the bright cap.  It seems that the chassis was still made of aluminum, but it is not clear whether some of these amplifiers already had the steel one typical of later models.  On the golden rear panel, the words “Superlead” or “Superbass” were written in black block letters, and there was a double fuse.  The Super Tremolo and Super P.A. versions that stood out because of the use of resistors 470K instead of 270K, were still available.
​
Antonio Calvosa
​