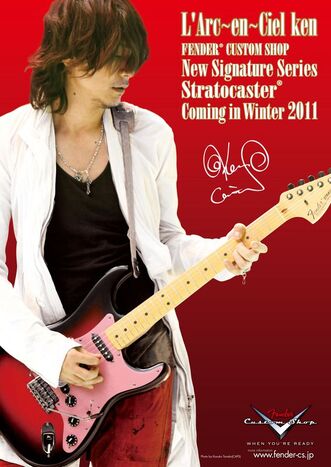 Michiya Haruhata was the guitarist of the Japanese band Tube, which debuted in 1985 with the album Heart of Summer.  In 1987 he started his solo activities in parallel with Tube and released 3 singles and 12 albums. In 1992, the single J'S Theme became the official theme song of the J-League, Japan's first professional soccer league. In 1993 he performed live in front of about 60,000 spectators at the National Stadium for the J-League opening ceremony.
Haruhata formally signed an endorsement contract with Fender on May 9, 2002. Three signature models have been released by Custom Shop: Michiya Haruhata Stratocaster, Michiya Haruhata BWL Stratocaster, and Michiya Haruhata III Stratocaster Master Built by Jason Smith.
In May 2002 Fender Custom Shop unveiled the Michiya Haruhata Stratocaster.  From late 2002 to the beginning of 2003, 60 team built pieces were built under the supervision of the Senior Master Builder John English. This model featured a large reverse headstock and a see-through White Blonde body with a gold anodized pickguard.

Ken is a famous Japanese guitarist that started his career as guitarist of L'Arc-en-Ciel. In 2010, Ken asked Fender Custom Shop to produce the "Galaxy Red" for himself. This guitar was also produced and released as a Team Built signature model limited to 30 pieces in 2011 (price ¥ 522,900), and then as a Master Built model by Greg Fessler, available as a time-limited order until December 31, 2011 (price ¥ 774,900).
But, from the very beginning, Ken wanted a release in a more affordable price range and, in the spring of 2017, the Ken Stratocaster Galaxy Red was released in Japan.
Ken Signature Stratocasters adverts: the Custom Shop model, 2011, on the left, and the made in Japan Artis Series Strat, 2018, on the right
The Limited Ken Stratocaster Experiment #1 differed from the regular Experiment #1 for its lacquer finish, the engraved neck plate, and for the custom hardshell case with purple lining.