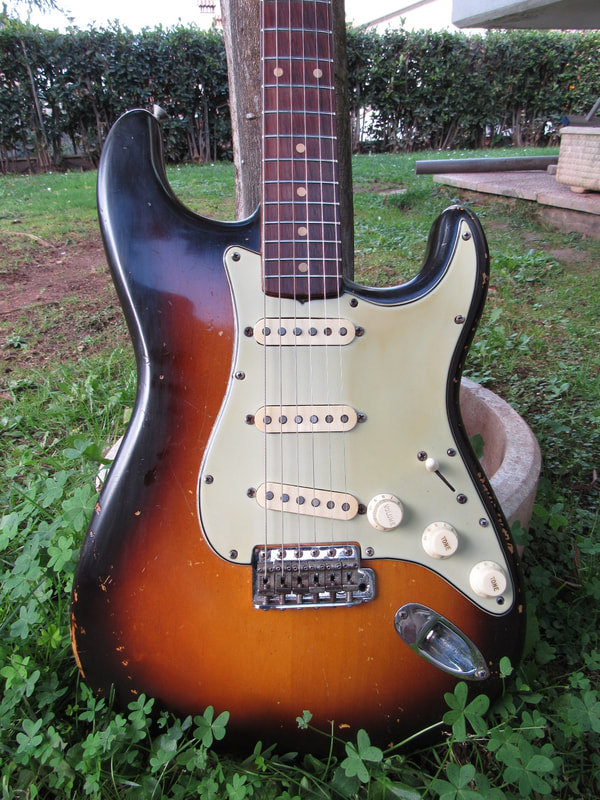 The pickguards used on the Stratocasters from 1954 were the monolayer white ones with eight screws, excluding those in anodized metal, rarely used between 1954 and the end of 1958. About 1.52 mm high, contrary to many beliefs they were not made of bakelite, but of vinyl plastics or of the new thermoplastic polymer ABS (acrylonitrile butadiene styrene): cheap, flexible and easy to work materials.
Below the pickguard, under the control area, a thin layer of aluminum was then glued and it went to cover, shielding them, potentiometers and switches.
The rear facade was initially semi-opaque but, gradually, Fender began to use pickguards which had both polished facades.

In the summer of ’59 these pickguards were gradually abandoned in favor of the three-layered (white/black/white) ones with eleven screws and in celluloid. Due to the unstable nature of this material, over the time, with the exposure to light or smoke, the black central layer tended to merge with the two adjacent ones, thus darkening the white layer which veered towards a tint similar to yellow-green or gray, reason why they are known as mint green pickguards or nitrate guards, as nitric acid was one of the components of celluloid.

During a short period of transition – around June 1959 – also hybrid pickguards were used: ten screws mono layer or eight screws three layer. Those used on the Stratocasters of ’59 and ’60 were slightly thinner than the three layer pickguards used in the following years.
For the purpose of shielding pickups and electronics, a thin aluminum sheet approximately 0.38 mm thick, which covered all the pickguard area, was placed under the three layer pickguards: on this sheet it was possible to find some pencil writings which sometimes could be confused with the signatures of those who carried out the quality control, but actually they were signs that served to guide the workers in the installation of switches and potentiometers.

In mid 1963 the screw placed between the pickup at the neck and the central one was approached to the middle pickup, thus obtaining the configuration that is still present on the eleven-screw pickguards of modern Stratocasters.
Since 1968 the aluminum shielding has been attached directly to the pickguard and reduced in the size to only cover the area of ​​the potentiometers and the switch; its dimension increased again in 1981 to form a thin sheet still glued to the pickguard, but which covered, in addition to the control area, also the pickups.
As the celluloid was very flammable and it shrank and broke easily over time, in 1964 Fender began to experiment new pickguard types. During 1964 the company tried a new pickguard, still in celluloid, but noticeably whiter and which tended to change its color towards cream over time. However, this too was not very resistant.
In late 1964 Fender tried to cover the surface of the celluloid pickguards with a thin layer of white fireproof paint with the purpose of making them more resistant. These pickguards, used only for a few months, were nicknamed fireproof guards and are recognizable because under the white layer you can see the mint green one.
In January 1965 Fender consequently began to gradually replace the celluloid pickguards with those in white plastic (usually vinyl or ABS). However, the “second generation” celluloid (white tending to cream) was not definitely abandoned; in fact, it is possible to find it, albeit rarely, in the Stratocaster pickguards made until 1968.

In 1975 the black three layer pickguards were used for the first time; between 1976 and 1980 they were used in all Stratocasters, with the exception of those with the antigua finish, the Strats (but not the Walnut Strats) and the Gold Stratocasters.

In 1981, with the introduction of the International Custom Color, available only for a short time, the white pickguards circulated again together with the black ones. These pickguards had a thin aluminum sheet under the pickups and the control area.

With the 1983 Stratocaster Standard, also known as "2 Knobs Stratocaster", the black pickguards were definitely abandoned in favor of the mono layer white ones with twelve screws: the new one was placed near the jack plate.
​
In 1987 the new American Standard was fitted with an eleven screw pickguard and in the post 1963 configuration; however, it can be distinguished from that of the Stratocasters of the 1960s because the screw holes were not countersunk but straight.

Between the beginning of 1962 and 1967 few Stratocasters were fitted with a 4-ply tortoise shell pickguard, similar to those used in the Jazzmaster or in the Precision Bass.

Between ’68 and ’70 Fender recycled on the Stratocasters also the turned pickguard of the Mustangs: they are recognizable thanks to the bottom layer of the pickguard, that not visible, pearloid, while the top layer was similar to that of the previous years.

The Elite Stratocaster had a white three layer pickguard with eleven screws, but it was impossible to confuse it with the pre-CBS ones, due to its shape and to the holes for the buttons adjacent to the tone and volume knobs.

Elite Stratocaster and its pickguard
The 1982 Vintage reissues were made according to the geometries of the old pickguards: eight screws those of the '57 and eleven screws those of the '62. However, for the latter Stratocaster Fender had initially blatantly mistaken the position of the upper screw, which was placed above the central pickup; this error was corrected in the same year.
​