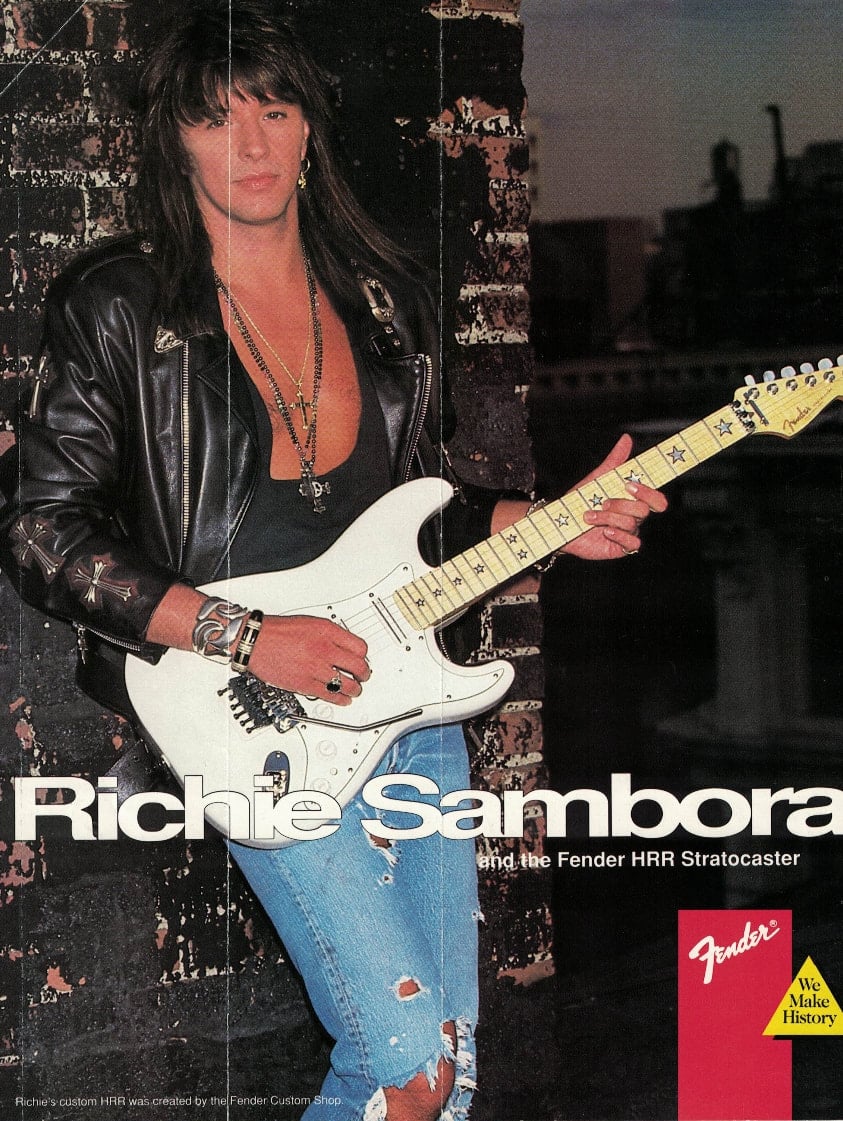 The Sambora Strat made in U.S.A. 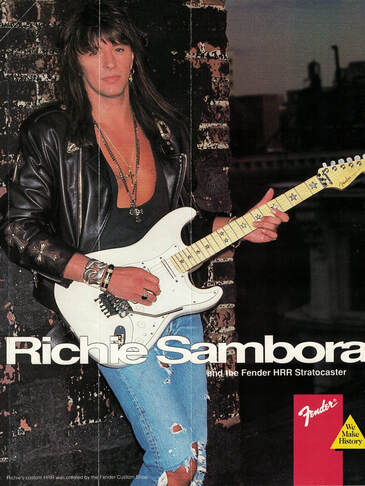 Richie Sambora posing for the Fender Fronline: despite the star shaped fret marker, the guitar in the picture is not his signature model, but a customized HRR strat
Richie Sambora is a rock artist who emerged in the mid '80s as Bon Jovi's guitarist and was also known for some of his solo albums among which was his1992 release, Stranger In This Town.
It was clear that Fender was interested in him, for as early as 1991 he appeared in Fender Frontline.  In one of the photos you could see the guitarist taking up a Stratocaster which at a first glance could seem a signature, but actually was a custom HRR '50s Strat (Hot Rodded Reissue, made in Japan).  Although this HRR featured a Floyd and star shaped markers, just like its signature, it had no signature on the headstock and the pickups at the neck and the central one were mini humbuckers (probably Seymour Duncan).
However, it took a little time for Fender to seal an agreement with the musician and in 1993 Fender unveiled his official signature, the ​Richie Sambora Stratocaster, obviously based on his HRR guitar, equipped with Floyd Rose Original Double Locking Tremolo, Di Marzio P.A.F. Pro humbucker at the bridge, with a TBX circuit, and two Texas Special single coils.  Its 22 jumbo frets, the 12" radius maple fretboard and the contoured neck plate with Micro Tilt made it ideal for the whole generation of the new hard rock and aggressive style guitarists that made extensive use of the vibrato bar.  Other distinctive features were the musician’s signature on the headstock and primarily the star shaped abalone markers.  It was possible to buy the guitars in two finishes: Cherry Sunburst or Arctic White.
“My goal was a versatile, comfortable guitar which would be well balanced - physically and electronically - and functional.  This model meets all my needs: smooth and buttery, but very much a classic Strat - the best of both words,” Richie stated about his signature.  However, the guitar underwent major changes almost immediately: the fretboard was replaced with a slightly less flat one (9.5"), equipped with medium jumbo frets, but, most important, the electronics were changed: a small button which activated a MDX (25dB) circuit took the place of the TBX.

The guitar was redesigned in mid-1999: the ​second series of this signature featured vintage style frets, a Custom Soft "V" shaped neck, slightly smaller star shaped fret markers, but, most importantly, the Floyd Rose was replaced by a six screw bridge and the pickup configuration changed from HSS to SSS with three Hot Noiseless single coils associated with a less racy MDX circuit (12 db). The guitarist’s signature was placed on the back of the headstock and the finishes became three: 3-Color Sunburst, Fiesta Red and Vintage White.

The Made in Mexico

The Richie Sambora Standard Stratocaster, made in Mexico, in production between 1994 and 2002, featured a Floyd Rose II Double Locking 2-Point Tremolo bridge and a Di Marzio Custom P.A.F. Pro. humbucker.  Unlike the first American series, it featured a 21-fret rosewood fingerboard without the star shaped fret markers, two Special Design Single Coils instead of the Texas Special ones and a simple four bolt neck plate without Micro Tilt.  It also lacked the mini switch and MDX circuit. 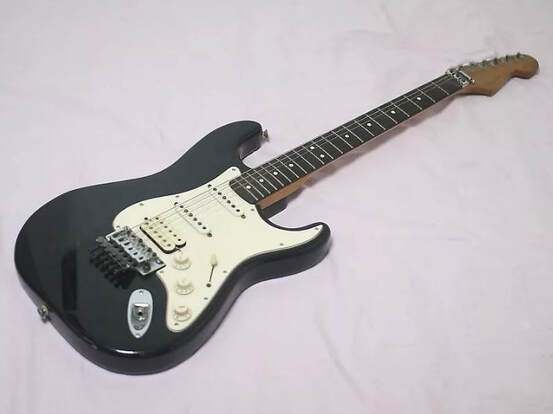 The Made in Japan 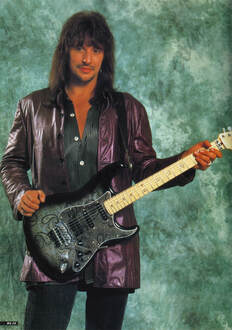 Japanese advert portraing the Richie Sambora Black Paisley, 1996 Twang catalog
Between 1996 and 2000 Fender Japan made the Richie Sambora Black Paisley Stratocaster (STR-140RS), available on the Japanese domestic market but, in 1996, as an export intended for the American and European market, too.  Paisley is a drawing obtained using boteh or buta, a drop-shaped floral motif, of Persian origin, back in fashion in the '60s for the similarity between its floral patterns and those psychedelic ones typical of LSD.  Previously this finish, in the pink version, had been used for a Telecaster became famous because played many times by James Burton, Elvis’s historical guitarist, and for a Stratocaster by Fender Japan.
Fender Japan made, between 1996 and 2002, other Richie Sambora signatures, but those were only intended for the Japanese territory and not marketed abroad, and had different specs.  These domestic models featured an alder body, 22 frets and 1-piece maple neck and the distinctive star shaped fret markers.
The STR-135RS sported a Di Marzio PAF Pro humbucking pickup at the bridge and two RS-Special single coils at neck and in middle position, TBX, contoured neck plate and Floyd Rose Original Double Locking tremolo system. It was available in Cherry Burst and Snow White finishes.
The STR-160RSH was equipped with two Hot Noiseless single coil pickups and a Di Marzio PAF-Pro at the bridge.  It featured a vintage style bridge and a Mid Boost Control switch.  It was available in Vintage White and Gold finishes.
The STR-160RSS was equipped with three Hot Noiseless pickups, MDX switch and vintage style bridge, and was available in 3-Tone Sunburst.