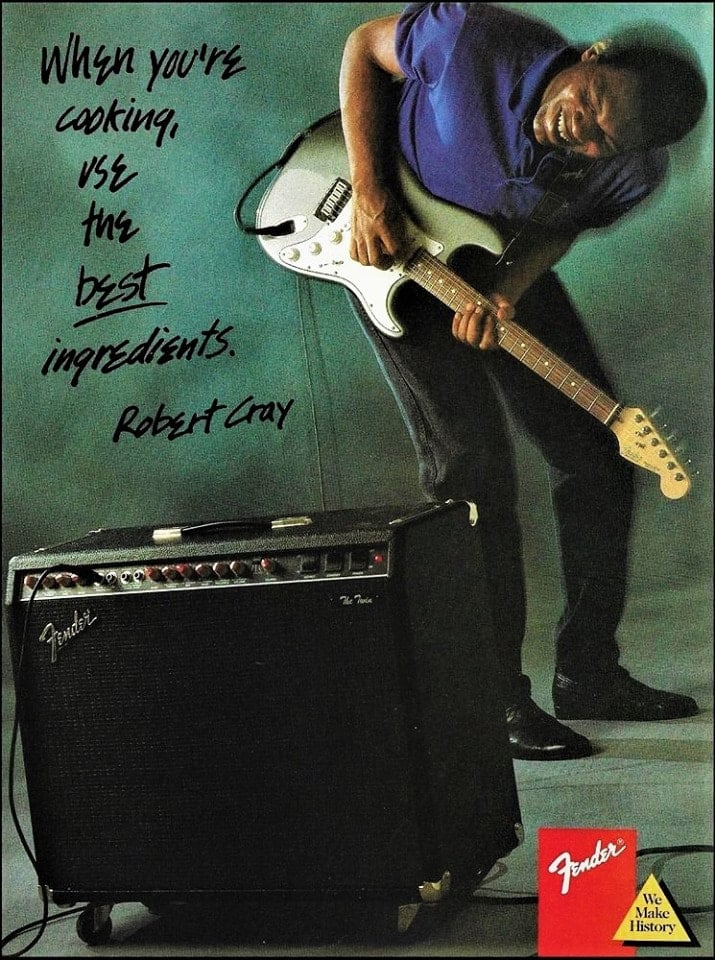 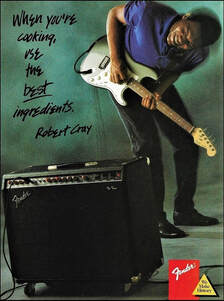 In 1990 Fender started to design a new signature Stratocaster to meet the requirements of Robert Cray, leading exponent of the new generation of blues musicians.
Michael Stevens of the Custom Shop recalls that Robert Cray, for his personal Stratocaster, asked him to lower the pickups to the same level of the pickguard: “If you had the pickup a long way from the string, you'd get less attack and much more an acoustic sound. You'd have to turn the amp little bit, and that's where a lot of Cray's tone comes from - his fingers, and the real low pickups.”  The musician asked him also a hard-tail bridge to minimize tuning problems.  Robert also asked Michael to get ideas from his two old Stratocasters, one of 1958 and a 1964 Inca Silver Strat that he had purchased in 1979 and had used for his first recordings: “I wanted to make my Signature a combination of that '64 Strat and a '58.  I wanted the neck to have that kind of feel.  It comes out a little wider than the '58 oval neck, which is how I like it.”
The master builder made for him, as his personal guitar, a Stratocaster whose strings were slightly off-axis, in which the treble E had “more room” for the vibrato than the bass E, so that Cray’s roadie told him: “The strings aren't straight down the middle of the neck!”  After explaining that it was something planned, the luthier asked the roadie to let the instrument be played by the guitarist, who came back saying: “This is great!”
The ​​Robert Cray Signature Stratocaster was made by Fender Custom Shop at the end of 1990, at first as a custom order only.  It was a Strat whose figured maple neck had an oval shape that resembled that of the guitars of the first ‘60s.  The rosewood fretboard and the vintage style frets reflected the musician's preferences.  The custom wound staggered poles single coils were made to obtain that harsh and sharp sound which was often associated to Robert Cray’s style - although the musician had stated in an interview that he had mounted on his personal Signature a set of Texas Specials.
The original chrome hardware of the Robert Cray Stratocaster was replaced, in mid-1998, with gold, while the radius of the rosewood fretboard went from 9.5" to 12" around the mid-90s. The available finishes for this signature were, at first, Violet, Inca Silver and 3-Color Sunburst (discontinued in 2010).
In 2003 the production of the made in Mexico Robert Cray Standard Stratocaster started too; it joined the Custom Shop model and was available in the Violet, Inca Silver and, for a surcharge, 3-Color Sunburst finishes.​
Antonio Calvosa

2007 Cray Strat Made in Mexico (Courtesy of Reverb)