Rory Gallagher's Stratocaster and the tribute 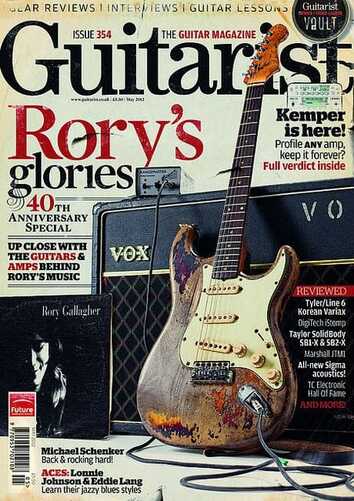 Richard McDonald of Fender Custom Shop defined Rory Gallagher’s 1961 Stratocaster as “an open book, like a diary of the journey his music had taken him on.”  And in fact this guitar, so much played that only few paint residues are visible on it, tells many stories.  Let’s start from the beginning.
Donal Gallagher, the Irish musician’s brother, remembers that Rory had loved the guitar from an early age and already at 15, still a student, he was playing in a professional band.  But he needed a better instrument than his Rosette Solid Seven to improve.  One day, while passing in front of the window of Cork's only guitar shop, Crowley's Music Shop on McCurtain Street, he saw a beautiful 1961 Stratocaster similar to that played by Buddy Holly, which actually was a very different Stratocaster, and he fell in love with it.  The guitar had been ordered for the guitarist of the group The Irish Showband, Jim Jim Conlon.  However, Jim wanted a Fiesta Red guitar, like the Hank Marvin’s guitar, not sunburst like that arrived at Cork’s shop.  So, he had to use the guitar for around half a year until the red one would arrive.  After the Fiesta Red Stratocaster finally got to Ireland, the Sunburst guitar was put on sale at Michael Crowley’s store.
It was offered for sale as a as a second-hand instrument for £100, too expensive for a guy like Rory.  But Rory wanted this Fender so much that, after negotiating the price, the shop’s owner, Michael Crowley, was persuaded to sell it to Rory for £80 and his Rosette.  The two brothers brought the guitar home and hid it under Donal’s bed.
Unfortunately, in 1967 the Stratocaster was stolen (together with a Telecaster) from the van in which Rory held his instruments; upset, Rory went to the producers of the Garda Patrol TV show of the only Irish TV station of the time asking them for help, and they made a report on the incident.  As a result the guitar, now too compromising for thieves and fences, was abandoned in a moat, where remained in the rain for many days before being found.  “I had it stolen one time, following a brief appearance at the Five Club to visit Pat Egan about the Dublin scene, and it got very beaten up then. I had borrowed a Telecaster, and it and the Tele were nicked. [...] Both guitars were found (with the assistance of some exposure on Garda Patrol on RTÉ) behind a front garden wall on the South Circular Road, with some of the strings missing and the bodies knocked about but, thankfully, they were OK,” Rory remembers.  This inconvenience, in addition to the very frequen use of his Stratocaster and the guitarist’s sweat, defined by many as “acid”, contributed to consume almost all the paint of the instrument and to transform it into what at Fender they call a "battle axe".

May 2012 Guitarist's cover, with Rory's Stratocaster, Vox AC30 and Rangemaster Treble Booster (thanks to Massimo Famularo)
At first Gallagher’s guitar, serial number 64351, was a Stratocaster with 1961 typical features: alder body, nitro 3-Color sunburst finish, 3-ply pickguard, “C” shaped neck with 7.25" radius slab rosewood fretboard; however, it was modified extensively over the years.
In the '70s Rory replaced the original pickups as two of them were damaged: “Recently two pickups went belly-up at the same time, they just cut out when I was playing.  I was terrified that I wouldn’t be able to get new pickups to sound the same, but fortunately they matched perfectly,” Rory recalls in an interview with Ray Hammond of the International Musician and Recording World in April 1975.  In the interview he did not say what pickups he had used, but Kent Armstrong, called by Donal to reproduce his brother’s pickups, inspected the guitar and saw that at the bridge it was equipped with one of the first Di Marzio FS1, while the other two were standard Fender pickups of the '70s.  So, Rory had even replaced the third original pickup of the ’61, even though it was working!  For a while he also used a Fender X-1 lead pickup, as Rory stated in the February 1985 issue of Guitarist Magazine, but at the end he preferred the FS1.  It’s nteresting to note that, around mid-70s, the bridge pickup cover seemed to have been brand new, whilst the other two were already yellowed and aged.  For a while, during the early ‘80s, Rory also used a black lead pickup cover (as you can see in the picture belove of Rory at the Ripley Music Hall of Philadelphia in 1982).
Also the electronics were particular: the original 3-way selector was replaced with a 5-way one and the first tone knob was disconnected, while the second worked as master tone.  The pickguard was replaced with an identical one in the second half of the '60s, because the original had deformed due to the heat accumulated during concerts with Taste.
The original Kluson tuning machines were replaced first the Schaller keys, then with six Sperzel tuners.  At some point, the low E string tuner gave away, and Rory installed a Gotoh.
Also, a white plastic fret-marker took the place of one of the clay dots of the twelfth fret and the bridge was replaced with a ’70 style one (probably of the Stars Guitars) that the guitarist blocked with a piece of wood.
In an interview with Strat Masters Interview, Rory declared that also the neck was grudgingly replaced, but only for a short time, with a spare one, as the original, now free of paint, had absorbed so much sweat that it had to be disassembled and was left to “dry” for six  months.  Probably the original neck was replaced on more than just one occasion, as Rory stated in the February 1985 issue of Guitarist: “I’ve had to take the neck off occasionally and dry it out – it was getting damp with doing so many gigs and I started to have tuning problems”.  The temporary neck, chosen by Chris Eccleshall, his technician from 1971 to 1985, could be distinguished for the absence of the white fret-marker at the twelfth fret.
Rory periodically added and removed a string tree to his guitar; but it is possible to notice that the neck was always the same (and not the spare one) thanks to the white dot.
Moreover, during the years, due to the many refrets (at least 18 according to Chris Eccleshall), the fretboard became flatter (about 9.5").
Joe Bonamassa got to play Rory’s Stratocaster in 2011 and declared, “Rory played a bunch of guitars in his time, but the '61 is the guitar.  There is no other.  When it came out of the gig bag, I was floored.  There I was, looking at a piece of history.  The contours, the heel, the fretboard... you could really feel that he'd played it and made it his own.”
From left to right: 1) Rory Gallagher at Isle of Wigh, 1970. The guitar is not extremely worn and there is only one string tree. 2) Rory at Covent Garden, 1979. Original neck with one brand new white dot and two string trees (Courtsy og Getty Images). 3) Rory at Ripley Music Hall, Philadelphia, 1982: original neck and only one string tree - and a black lead pickup cover! (photo by Jon Hahn) 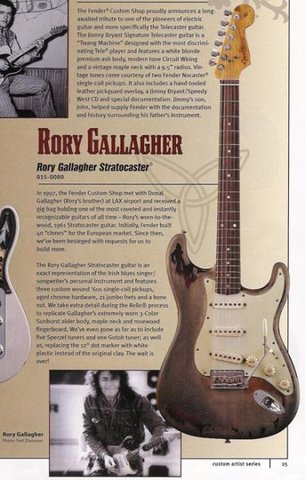 2004 Fender Catalog
As the guitar of the Irish blues/rock musician was now a real cult object, above all among Fender employees, the ​Rory Ghallagher Tribute Stratocaster became a very important project with a strong media and emotional impact.
In 1997 Mike Eldred of the Custom Shop met Donal Ghallagher at the International Airport of Los Angeles to borrow Rory’s old guitar: “It was a big honor just to hold something that such a great artist had played so much blazing music on,” Mike remembers.
John Cruz wasn’t yet a Master Builder when it was proposed to him to make some replicas of the instrument.  “It was so cool [...]. One night after everybody went home I plugged it in and just really cranked it.  What a great experience to play that guitar!”, John recalls in an interview.  “To be honest, Rory's strat wasn't the easiest guitar to play.”  And maybe the charm of the Irish musician’s Stratocaster was really this: that it was a kind of "stallion" to tame but to which you had to adapt a little.
The day after John English of the Custom Shop took the Stratocaster and started analyzing it; there were so many “strange” things and small modifications below the pickguard that every time John found a new one he screamed: “Cruz! Come here! Take a look at this!”
In 2004 John Cruz made, by hand, the first prototype of the Rory Gallagher Tribute Stratocaster.  It took only three days for the Master Builder to remove the paint and replicate the features of Rory’s guitar body.  John decided to make the replica more playable by shaping a more comfortable neck.
Once finished the prototype was sent to Donal who was amazed at how faithful the neck was to the original and gave permission for the marketing of 40 Rory Gallagher Tribute Stratocasters for the European market.
To be honest the differences were many: the electronics, the bridge, which on the tribute was six screw Vintage Style “FENDER” stamped, but, above all, the main oddity lies in Fender’s choice to use "PAT 2,573,254 2,741,146 2,960,900" patent numbers (recognizable, even if definitely worn) that began to be applied on Stratocaster headstocks only in 1962 and then were not compatible with Rory’s 1961 Stratocaster. The radius of the fretboard of the tribute was 9.5", and not 7.25" like the ’61 Stratocasters; however, a flatter fretboard was preferred as also Rory’s original guitar, due to the many refrets, approached this value.
The success was such that the Master Built became the basis for the team built version that Fender continued to make as Custom Artist model under John Cruz’s supervision.  In 2010 the guitar was renamed Rory Gallagher Signature Stratocaster.  Obviously the Custom Shop started producing the team builts very slowly, and then continued production faster.  At the beginning the Rory Gallagher Stratocasters were equipped with a 5-way switch, but later a 3-way one was at first was put in the case as an accessory kit and later installed on factory issues.
Antonio Calvosa