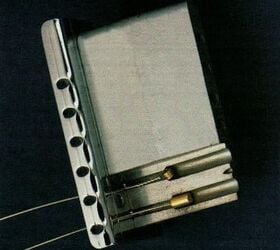 The Stratocaster vibrato unit used between 1954 and 1971, the Synchronized Tremolo, represented an authentic revolution in the field of electric guitars.  Indeed, it provided that the vibrato and bridge units moved simultaneously back and forth as if they were a single body - hence the term “synchronized” - minimizing friction and maintaining the tuning of the instrument, at the same time securing much more than a slight variation in the pitch of the guitar sound.
The beveled margin of the chrome-plated base-plate of the Synchronized Tremolo was secured to the Stratocaster body with six strong screws placed in front of each saddle.  The six strings were stuck inside a massive inertia bar (a.k.a. tremolo block) in milled steel, painted light gray, which was fixed onto the base-plate with three short flat-head Phillips screws and hidden inside the guitar body.  The right tension and the return to the correct tuning were ensured by anchoring the final part of the inertia bar to the body of the guitar thanks to five springs, (or less than five, depending on the guitarist's taste), parallel to the strings.  The right balance of tensions between strings and springs provided both a functioning vibrato and stable tailpiece.
The proximity of the fulcrum or pivot point to the point of contact between strings and saddles permitted the unit to feature a thin bar, a departure from the heavy, flat Bigspy-type handle.
The six saddles were made of nickel-plated bent steel and stamped with the words “FENDER” and “PAT.PEND.”.  By '53, other companies had individual length-adjustable bridges as well, on guitars.  But the Stratocaster bridge was adjustable for both the length and height of each string.  Over the years, slightly variations in saddles stamping occurred.  Also, the saddle end perpendicular to the base-plate was slightly longer after ca. March 1955.
Since 1955 a snap-on chrome-plated cover, which was usually removed and lost after purchasing the instrument, was added to the Synchronized Tremolo.  Now it is usually called ash tray for its shape, although this term was originally coined for the Telecaster bridge cover.  It was probably added to the bridge following the request of some guitarists who blamed the wear of the cuffs of clothes caused by the screws of the bridge, and not for aesthetic reasons as it is often reported.
Tremolo block made since ca. March 1955 featured less rounded corners and deeper countersunk holes depth than the early units.
During 1971, the vibrato unit sported a new squared-off block, characterized by an octagonal cross-section, and new saddles.

In late 1971, CBS changed the design of the Synchronized Tremolo to a cheaper one-piece, die-cast unit made of a metal alloy named mazak, whilst during the Strat’s first decade and a half, the base plate and the perpendicular inertia bar were separate pieces.
The perpendicular end of the base-plate was slightly longer than that of the original tremolo assembly and new cheaper die-cast saddles replaced the original bent steel saddles.
The part number “010347” was stamped at the bottom of the block, whilst the bottom side of the saddles was stamped with the part number “027037”.​

The CBS die-cast bridge remained in production until 1983, when it was replaced by the infamous die-cast Freeflyte Tremolo, used on the Elite Stratocaster and on the second version of the Stratocaster Standard, known as “2-Knob Stratocaster”.  It featured a pop-in tremolo bar and new elongated saddles.  According to many, it suffered tuning problems.
The freeflyte tremolo lacked the inertia bar and the springs’ tension was regulated by the front face of the body, and, consequently, the guitar had neither back cavities nor back plate.  It had a single knife edge pivot that went all the way across, so there were no base plate screws.  Instead, there was a V-groove block that received the knife edge.
The freeflyte assembly used on the Elite Stratocaster was characterized by a massive tail with a large “F” stamp, whilst the vibrato used on the Standard model appeared thinner.

With the introduction of the American Standard Stratocaster in 1987, Fender came back to a classic-looking vibrato unit, although it was not was secured to the body with six screws, but only with two large pivots – hence the name 2-Pivot or 2-Point Synchronized Tremolo – which acted as a fulcrum.
Saddles and tremolo block were manufactured by forcing powdered metal into a mold and formed under high pressure, whilst the base plate was cold-rolled steel that was punched out of a flat sheet.
The solid block saddles had a small slot to slide the strings and offset intonation screws.
The tremolo block was angled for an extended range of motion and low-carbon steel.  The very first tremolo blocks were nickel-coated but, in a short time, they would be painted and, starting from the '90s, powder-coated.  According to the initial project, the junction point between the block and the base plate had to be bare and uncoated; it is not clear why the whole block, junction point included, began to be soon powder-coated.
The original Synchronized Tremolo was intended to be used with bullet-end strings.  Over the years, many companies started to produce ball end strings, which worked well on all electric guitars.  If the bullet made tighter and more uniformly solid contact with the tremolo block, the new ball-end strings were not so stable, and Fender began to drilling the holes deeper and deeper, removing more and more metal from the tremolo block.
The very first 2-Point Synchronized Tremolo bridges had the two pivot studs going straight into the body; between April 1987 and early 1988 Fender changed the bridge and the new one had two pivot studs going into threaded inserts.
In 2008, when Fender unveiled the second series of the American Standard, a substantial innovation involved the bridge: while the two-pivot system remained unchanged, new bent steel saddles replaced the old block saddles.  The new ones were narrower - the string spacing passed from 2 7/32” (ca. 56 mm) to 2 1/16” (ca. 52 mm) - to keep the strings away from the edges of the fingerboard.  Consequently, the external strings "entered" deeper into the neck than those of the previous series.  Fender declared that also the height of the saddles was decreased “to reduce rough feel”, while the “string slot on saddle was elongated to reduce string friction or breakage”.  The old powdered steel cast with resin inertia block was replaced with a copper infused steel cast to obtain an “increased mass and improved tone”, as Fender said.  The mold used for its construction remained the same; therefore, in the face of an increase in the mass and an improvement in the tone given by the new tremolo block, there was no increase in costs for the FMIC.

The Strat unveiled in the mid-1980 was equipped with a two-piece brass bridge, while the Standard Stratocasters still featured the CBS bridge.  In order to increase the sustain, the end of the base-plate was characterized by a massive resonance bar stamped with the words “FENDER U.S.A. PAT. PEND.” – or “FENDER USA” since mid-1982.

Vintage Reissue Stratocasters, unveiled in 1982, featured a vintage-style bridge.  The bent steel saddles simply featured two “FENDER” stamps.  At first these words followed the same direction from both sides, but, gradually, since 1989, new saddles which had the “FENDER” stamps in reverse directions were introduced.
In 2013, with the introduction of the new American Vintage Series, the stamp changed to “FENDER” / “PAT.PEND.”, imitating that present on the pre-CBS Stratocasters.