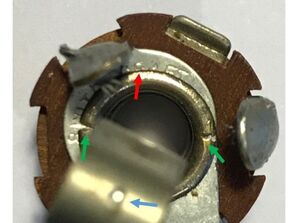 Until 1967 the electrical wires were coated with a black and white cloth.  Since 1965, Fender sometimes used yellow wires instead of the white ones.
Since 1967, PVC plastic coated wires gradually replaced those cloth coated.  PVC plastic was usually black or white.  Since ca. 1970, plastic wires with a smaller section were used.
Red and grey bottom pickups used on the 1982 Vintage Reissues usually featured a plastic coating, whilst their black bottom pickups had the old-style cloth wires.

The first back plates used on the Stratocasters were mono-layer, ca. .060″ thick, and featured round holes for the strings.
In early 1955 the holes became oval shaped to make the strings changing easier.
In 1976 Fender started to use 3-ply (black/white/black) back plates.
In the 1987 American Standard and in the Plus Series the holes were replaced by a single large horizontal hole.

Fender Stratocasters were equipped with Switchcraft jack plates. As you see in the pictures, they featured some slots (green arrows) and the word “SWITCHCRAFT” stamped (red arrow) on the inner metal ring, and a dot at the end of the contact plate (blue arrow). The older Switchcraft jack plates usually had a darker brown fiberboard panel.

Gold-plated hardware available on request between 1960 and 1967.

Initially, Stratocasters were usually fitted with half-threaded round head Phillips screws. In 1958, Fender started to use full threaded mounting screws for the pickguard and in ca. 1962 for the neck plate, too.
It’s important to bear in mind that the very first 1954 Stratocaster could be fitted with flat head screws, too.