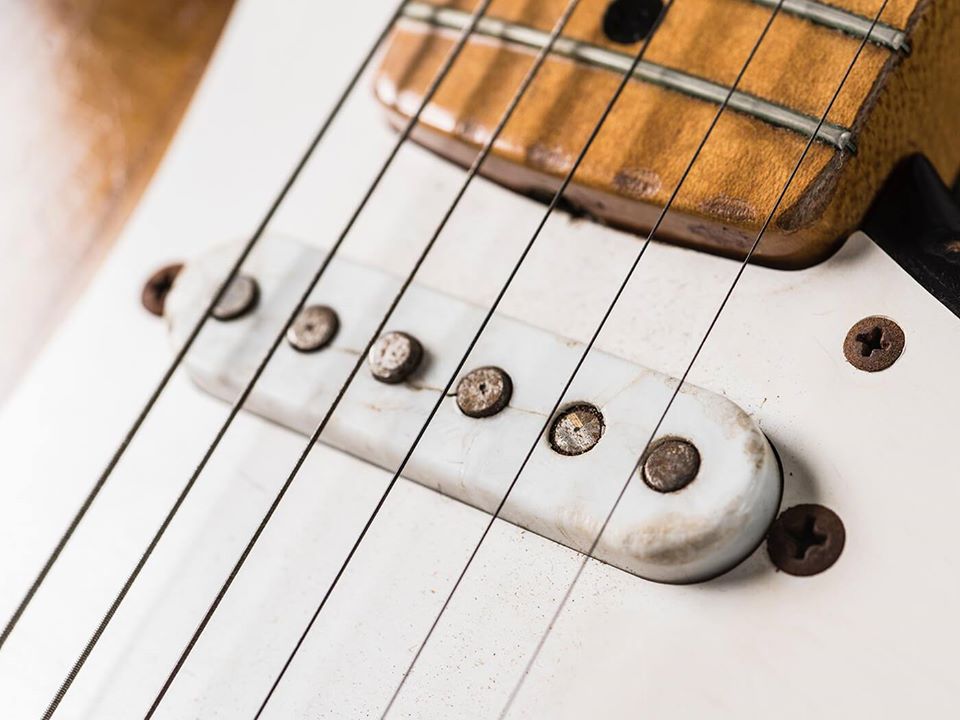 The Stratocaster was the first Fender guitar equipped with plastic pickup covers and volume and tone knobs.  They are often wrongly associated with bakelite (rather dark in color), but actually they were in polystyrene, a rigid but so fragile thermoplastic polymer.  In March 1957 polystyrene was replaced by ABS (acrylonitrile butadiene styrene), because it was too fragile.  ABS had a tendency to darken or slightly yellow over time.
The very first polystyrene knobs and pickup covers were translucent, so that sometimes you could see the coils through the pickup covers, and had rounded edges.  They were particularly brittle, reason why Fender began to use another type of polystyrene, white and opaque.  Unfortunately, even new plastic was too fragile.  In particular, volume and tone knobs had a brief life when mounted on the solid shaft pots used for the first Stratocaster guitars and they could break even when they were pressed during the very first installation, or shortly after!
According to their shape, 1954 Stratocasters knobs made with the first mold are usually called short skirt (or, sometimes, tall boy), whilst those built with the second mold are called long skirt.
The numbers on the knobs were colored with the same golden ink used for the logo decal.  However, the ink could oxidize over time, turning green or even disappear.  With the exception of the '54 short skirts, which had no spokes at the bottom side, Stratocaster knobs featured only three spokes until the '70s, when new knobs with four spokes were made.  At the same time, font used for numbers also changed and became slightly larger.
In 1975, Fender began to use black knobs, pickup covers, and switch and tremolo arm tips. These plastics were retained until the end of 1981 and were used also in many 1981 Stratocasters with white pickguard.
The 1981 Stratocaster Standard, also known as “Smith Strat”, featured black or white plastics according to the body color.  Instead, the new 1983 Stratocaster Standard, known as “2-knob Strat”, had only white plastics.
It's important to bear in mind that the Strat unveiled in 1980 featured brass knobs, whilst the Elite Stratocaster made in 1983 and 1984 had "F" stamped plastic knobs with rubber grips.
​