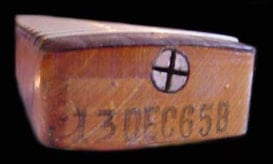 Although neck dates preceded the actual completion of an instrument by a few weeks or months, they were commonly considered by collectors as point of reference for dating a Fender Stratocaster.
Neck dates, when present, were written on the heel of the neck, under the truss rod bolt.  These markings were always written on the bare wood, once the cutting was completed, prior to being finished.
Most Stratocaster necks have been quite consistently dated at the factory, with the notable exceptions of a few months between Spring 1959 and early 1960 and between 1973 and 1981.  According to legend, necks were not dated in 1959 due to a complaint by a Fender customer as to an obscenity written on the neck butt.  It should be noted that body dates were still applied during these months and they are very useful to assess the age of Fender guitars made during this period.
Various dating marks have actually been used at the factory according to the period of production. 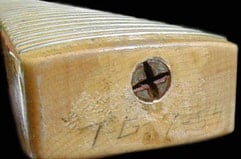 Until March 1962:
Neck dates were generally penciled in black under the truss rod bolt and indicated in numerals.  They are usually separated by either a slash or a hyphen.  Day was not systematically mentioned, although it can be found on some 1954 necks.
Up to the mid-50s, the employee who checked the neck frequently added his initials ahead of the date.  The most commonly found are “TG”, which stands for Tadeo Gomez, or “XA”, which stands for Xavier Armenta. For example, “TG-7-54” means “Tadeo Gomez, July 1954”.
In this regard it is important to point out that Tadeo or Xavier never made an entire neck on their own.  There are many photos documenting that this always was a manufacturing process involving many people, and not only one employee.

Since March 1962 to 1973:
The date was no longer penciled but rubber-stamped in black, blue, green or even red.  A new sophisticated code, which not only shows the first three letters - no longer the numbers - of the month and the last two digits of the year, but also the neck width at the nut and the guitar model, was used.  Few left-handed necks came without any marking.

Depending on the year of production, Stratocaster necks were identified by the different inventory code prefix:


Stratocaster neck width was identified by letters from “A” to “D”:


Standard necks (B) were the most common, but other sizes were available at an extra cost in addition to the standard one. 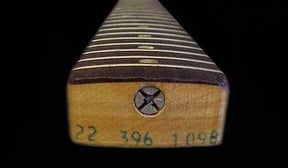 The number indicating the models changed again and the Stratocaster was identified by “09”.

Moreover, also the code for the fretboard was introduced:
“00” and “01” for the rosewood
“02” (rare) for the maple
“03” for the rosewood and the maple with walnut skunk stripe in the back of the neck.​
Also, during the '70s:
In the '70s Fender also stamped on the neck:These dates, however, referred to the quality check of the instrument.
Also, since Autumn 1981:
With the purpose of highlighting a better quality control on its instruments, Fender has begun to apply on the neck two more decipherable codes which clearly showed the year: one stamped on the heel – although on the first American Standards the date was marked in pencil – and another through an "inspection" sticker that in addition to the date of the quality check indicated also the quality control officer on the neck-body conjunction part.
On the Elite Stratocasters was used a stamp in which the date was even more evident (ex. DEC 9 1983), while on the Vintage reissues, respecting the old way of dating the necks, Fender preferred to write in pencil the exact date of production (ex. 1/14/83).