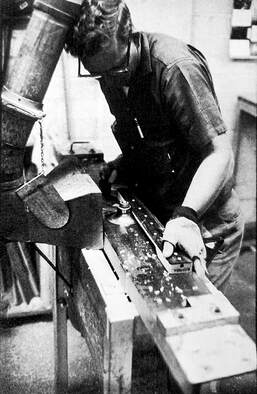 Fender employee carving a neck (Photo: "Fender: The sound heard 'round the world" di Richard R. Smith
The neck section of the Stratocasters changed a lot in the early years, gradually moving from the “D” shape of the '54 Stratocasters, also called baseball bat, thick and wide and reminiscent of a large semicircle, to the “V” one (known as boat neck) typical of those made between ’56 and ’57. A the beginning the “V” profile had a little pronounced angle and was known as soft “V”; however, it became increasingly marked to reach its climax in '57 with the contour known as strong “V”, passing through that medium “V”. In this period also some small strong “V” necks, with pronounced angle but not excessively large, were made.
There are those who claim that once you have tried the "V" shape, there is no going back, and Eric Clapton is known to have defined that of ’57 the best shape the Stratocaster neck has ever had.
In ’58 the neck was once again flatter and rounder, still “D” shaped, but much less massive than that of the first Stratocasters, and in ’59 it became even less thick. The first necks with rosewood fretboard, which have been made since mid-1959 and the early '60s, are universally considered among the best in Fender production: they are not excessively large and had an oval appearance, often defined oval “C”.
In the early '60s the profile remained fairly constant, with slight variations (the ’62 necks appear to be slightly thicker than those produced between '59 and '61).
The closer you got to the '70s, the more the shape and the thickness of the Stratocaster neck was not constant varying from a guitar to another, an indicator of the transition to increasingly mass production and less attention to the details: its appearance was never as heterogeneous as that of the '70s.
A the end of 1981 Fender bought the Austrian carving machine Zuckerman, which could shape, based on a master template, eight perfectly identical necks simultaneously; consequently, their profiles returned to be more constant, flat and with rounded edges: the flat oval shape, sort of “C” from which the 1987 American Standard will be inspired

The fretboard radius of the Stratocasters had been 7,25 inches since its birth and until mid-1983; however, according to how the sander was set day by day and to the manual skills of the worker, it could undergo variations.
The new 1983 Standard Stratocaster, known with the nickname "2 knobs Stratocaster", and the Elite introduced for the first time a particularly flat fretboard (12 inches).
A few years later the American Standard and the Plus series returned to slightly lower values ​​(9.5 inches).