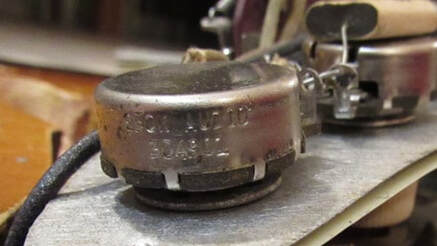 Since the plastic knobs of the Stratocaster could break even when they were pressed during the very first installation - or shortly after - by September 1954 Fender was forced to redesign knobs and replaced solid shafts with knurled split shaft pots.
Fender Stratocaster pots value was 250 kOhm, although few early guitars were fitted with 100 kOhm potentiometers.
Their shape has varied over the years: some were countersunk, while others featured a flat top.
The first pots used on the Stratocaster were made by Centralab (only in 1954) and Stackpole.  In 1963 Leo Fender started to use also CTS (Chicago Telephone Supply) potentiometers.  In 1966 a huge amount of CTS pots was bought and Fender took five years to use them all.
Since 1972 it has been possible, on order, to ground potentiometers and the switch by means of black plastic-coated wires.
​

HOW TO DATE FENDER POTS

Potentiometers used by Fender were stamped onto the back or sides of the pot with numbered codes which usually could give information about date of production, manufacturer and resistance values.
Pot’s codes were composed by the manufacturer code, followed by numbers which indicate week and year of production: Where “Y” indicates the last digit(s) of the year of production and “W” the week, whilst MMM indicates the manufacturer: Unfortunately, these codes can be faded, worn, or obscured by solder and other components.
This code is not to be confused with the part reference numbers frequently stamped on the pot by the manufacturer for inventory purposes. For example, the full pot marking “021357 250K A 1376612” can be read:
“021357 250K” = the part number for a 250K audio pot
“1376642” = the dating code (CTS 12nd week of 1966)
Pot dates can be a useful tool in dating guitars, but it is important to keep in mind that this is the date of production of the potentiometer (not of the guitar), although they can give an idea of when the guitar was built.  Fender sometimes took a very long time to use a batch of potentiometers, and they may be considerably older than the guitar itself.  For example, in 1966 Fender bought a huge amount of CTS pots and took five years to use them all.  It should be also considered that potentiometers in an older guitar may have been replaced. ​

It operates as follows: ​It consists of two stacked potentiometers.  The first is a standard 250 kOhm audio taper with a range from 0 to 5, which cut treble.   Underneath the first pot there is the second pot, which is a 1000 kOhm linear taper, connected to a 0.82 kOhm resistor and a 0.022 µF capacitor.  This pot cuts the bass, enhancing high frequencies, and ranges from 5 to 10.
At the mid-point – the 5 setting – the TBX is equivalent to a normal tone control set all the way up, on 10.