Telecaster Neck Dates and Other Markings 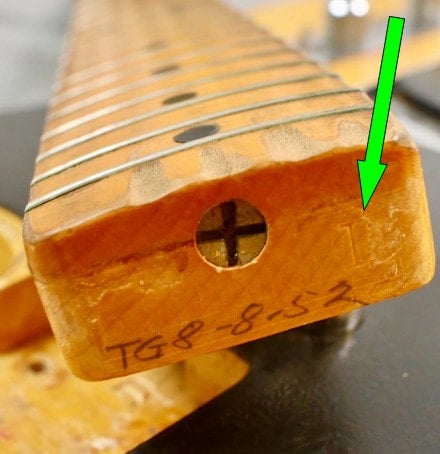 Although neck dates preceded the actual completion of an instrument by a few weeks or months, they were commonly considered, whenever available, as point of reference for dating a Fender guitar.
Neck dates, when present, were written on the heel of the neck, under the truss rod bolt.  These markings were always written on the bare wood, once the cutting was completed, prior to being finished.
Most Telecaster-style guitar necks have been quite consistently dated at the factory, with the notable exceptions of a few months between Spring 1959 and early 1960 and between Spring 1973 and late 1981.  Neck dates are not present on pre-production guitars and on the very first models released prior to October 1950, too.  Furthermore, necks marked in October 1950 were dated on their back of the neck heel.
Various dating marks have actually been used at the factory according to the period of production.

Until March 1962, neck dates were generally penciled in black - although they may also be found in red (1953/54) or even in green (rare, in 1950) - and indicated in numerals.  They are usually separated by either a slash or a hyphen.
Up to the mid-50s, the employee who checked the neck frequently added his initials ahead of the date.  The most commonly found are “TG”,  which stands for Tadeo Gomez, “DZ,” featured mostly in 1950, which stands for Dickie Zamora, and “XA”, featured mostly in 1956, which stands for Xavier Armenta. Other initials such as “AG” or “TD” also exist, but the names behind them so far remain shrouded in mystery.
In this regard it is important to point out that Tadeo or Xavier never made an entire neck on their own.  There are many photos documenting that this always was a manufacturing process involving many people, and not only one employee.
Necks made from mid-1951 until late 1955 sometimes sported a “D” stamp next to the date.  Nobody knows its meaning.  George Daimler, a former Fender employee, claimed that it stands for “inspected”.
A few collectors supposed “D” stands for “detected”, “done”, “dried” or “checked”.  However, it seems that only the necks that came back to the factory to be refinished or modified got this stamp.
It's important to bear in mind that neck dating procedure was suspended for a few months between Spring 1959 and the early 1960.  According to legend, this is due to a complaint from a guitarist who had found obscene writings at the base of the neck.  It should be noted that body dates were still applied during these months and they are very useful to assess the age of Fender guitars made during this period.

Between March 1962 and March 1973:
Telecaster and Esquire necks  were identified by the same inventory code prefix, “3”, whilst the letter suffix in indicated the width at the nut:

For example a “3AUG68B” means:
“3” = Telecaster/Esquire neck
“AUG” = July
“68” = 1968
“B” = Standard nut width
It does not refer to neck made on July 3, 1965!
​
The late ‘60s:
Some necks featured a different kind of numeric code, usually in green with either smaller or taller digits, made of 6, 7 or 8 digits.  It was used at the same time as the classic one seen so far.
Few left-handed necks came without any marking.  Also Rosewood Telecasters were often devoid of any neck date, although they sometimes sported a barely visible black ink stamp.
​
After 1972:
These necks featured an entirely new type of marking.  The old code was not dropped until April 1973; hence, for a while two different type of code were used at the same time.
The new numeric eight-digit code was more elaborate and indicated also the fretboard type and the day and the week of production.  It may be stamped in black, red or green.
The eight numbers could be divided in two groups, which were sometimes separated by
"x", "-", "•", "½" or "¼".

The first group of 4 digits is meant to indicate the model and the type of fretboard:

After CBS called in the new management team, with the purpose of highlighting a better quality control on its instruments the old code system was dropped and clear date markings were resumed.Vintage Telecaster necks, however, were dated with an old-style marking penciled (MM-DD-YY) in numerals.