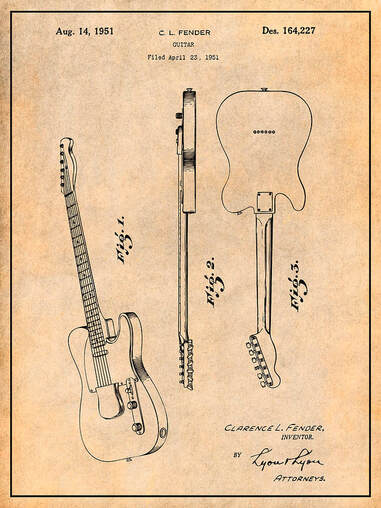 Size and profiles of the necks of the ‘50s Telecaster style guitars show varying tolerances, especially over the first years.
The very first pre-production guitars had a wide flat “C” neck profile.  The other pre-production Esquires and the earliest Broadcasters featured a bulky neck (.95" depth and 1.65" wide would be a good average indication for the period) with a very prominent “V” profile, also called “boat neck”, with comfortable rolled fingerboard edges, which made it easy to press the thumb on the low E string.
Some later Broadcaster and early 1951 guitars featured slimmer and much more rounded “D” shaped necks, with slight variations in thickness (e.g. .85" depth and 1.63" wide), others sported soft “V” necks (e.g. .83" depth and 1.66" wide).
Towards late 1951 neck became even smaller.  Slim “D” necks (e.g. .82" depth and 1.65" wide) were used until 1954.  Many ascribe this change to the advice Leo was given by violin teachers, who believed the new profile would have allowed to better exploit a technical approach to the more classical instrument.
In 1953 larger and thicker “baseball bat” necks started to appear (e.g. .94" depth and 1.68" wide).
1954 and 1955 necks became more rounded, still keeping a thick profile (e.g. .94" depth and 1.60" wide), which someone call large “U”.
In the course of 1956 soft “V” shaped necks, which were less prominent than those of the 1950, appeared, and gradually replaced the more rounded ones, but later in 1957 they went back to being very pronounced.
Early 1958 necks were flatter and rounded, though they still had a slight “V” feel.  However, in late 1958 a much flatter profile was adopted with thickness steadily below .90" at the 1st fret.
Rosewood necks made after mid-59 were really flat and had a cross-section often below .80" depth!
Early to mid-'60s necks retained similar dimensions, but after 1963 they often featured more shoulder and seemed to be a bit chunkier than 1959 to 1961 necks.  They are universally considered among the best in Fender production, not excessively large and with a shape which is often defined oval “C”.
By the late '60s, both flatter and chunkier profiles were produced, due to an increased production. As a rule, however, round clubby necks with a lot of shoulders are the standard on most '70s Telecaster guitars with measurements like .85" at the 1st fret and .95" at the 12th fret.
By late 1981, Fender bought the Austrian-made Zuckerman carving machine, which could shape eight identical necks at a time as per a master template, and helped Fender to standardize neck profiles.
Consequently, neck profile returned to be more consistent, rather flat and with rounded edges. This “flat oval shape”, a sort of gentle “C” profile (e.g. .80" depth), became a standard appointment on '80s and '90s modern Fender guitars.

Pre-production guitars and earliest Broadcasters featured 9.5” radius necks, but many Broadcasters and 1951 guitars necks were built with a 7.25" radius as to offer a slightly convex fretboard, which became the standard trim until the early '70s.
The 1973 Deluxe was the first Telecaster model designed again with a slightly flatter 9.5" fretboard radius, whilst other Telecaster variants kept a standard fingerboard.
In 1983, the newer Elite and Standard Telecasters were introduced with an even flatter 12" radius, meant to facilitate string bending.
American Standard Telecaster officially introduced at 1988 Winter NAMM adopted an intermediate 9.5" radius, whilst the '52 Vintage reissue Telecaster featured a vintage 7.25" radius fretboard.
From the start, Fender used thin nickel silver fretwire (ca. 0.078” wide and 0.040” high”), which remained a standard feature on Telecasters for almost three decades.  The frets were slid on the side, rather than the traditional method of pressing them in from the top.  Maple necks were sprayed after the frets were installed.
In 1973, the Telecaster Deluxe was equipped with wider frets to match its flatter fingerboard.
By the early '80s, jumbo fretwire became the standard appointment, except on the '52 Vintage reissue Telecaster which retained a more traditional thinner fretwire.