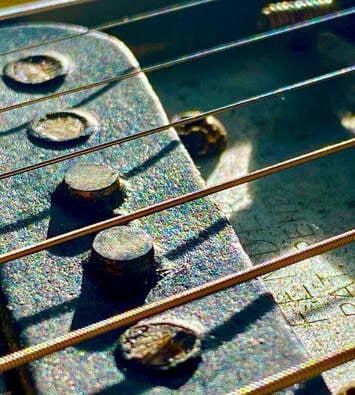 Obviously, composition of the magnets is not the only critical factor which influences the pickup tone.  Coil wires, winding methods, encapsulation of the coil and pole dimensions have a subtle influence over the sound.
​

​Initially, the coil was protected by black tape, but around 1951 Fender gradually switched over to black (at first) and then white cotton string.  Since the early '70s, the color of the cotton string has reverted to black.
The poles of the first lead pickups were “flat”; however, some Telecaster guitars came out of the factory with an unbalanced sound and with the low E too strong, owing to a still somewhat inconsistent production.  Leo fixed this, from late 1955, by staggering the height of the magnetic poles with a raised D and G pole pieces.  This said, although the sound was now more balanced, it was also sharper.
Flat poles bridge pickup reappeared only in 1981 on the '52 Vintage Reissue and was later reinstated on the American Standard.
Bridge pickups were not wound to an exacting number of turns, but to deliver a certain output on a volt-meter with a 20% tolerance, which explains why there are variations in the measurements of vintage units.  Furthermore, initially Leo Fender didn't use 42 AWG wire windings, but slightly skinnier 43 gauge with a higher DC resistance, and some of the very first bridge pickups featured more than 10000 turns of wire and a few of them originally boasted a DC resistance well above 9k Ohms.
Towards the end of 1950, however, Fender switched to 42 gauge wire.  The thicker wire allowed a lesser numbers of turns, thus reducing labor cost.  New units featured on average 9200 turns and delivered anything between 7k and 7.8k Ohms.
Until 1964 Fender pickups were wound with hand-guiding machines, which turned the bobbin, while a worker would guide the wire onto the turning bobbin.  The readings for the number of turns came through a belt-driven worm gear counter, which was a fairly inconsistent piece of machinery.
The exact number of turns and the tension in winding, which could stretch wire and affect its diameter and length, could vary from pickup to pickup and influenced the tone.
In 1965, with the CBS takeover, Fender gradually replaced the old-style hand-guiding machines with new auto-winders and conversion ratios brought about some confusion.  Newer coils were more consistent with neatly parallel winding, but as rule they were not wrapped as tightly as the older ones, because wrapping tight on an automatic winder tended to break wire.  Therefore, older pickups usually had a slightly higher output, whilst newer ones had a little more top frequency response.
​

Those made in the '50s usually featured about 8000 turns of wire and delivered anything between 7.3k and 8.1k Ohms.
As happened to the bridge pickup, the introduction of auto-winders in 1965 and conversion ratios brought about some confusion, and the number of turns changed back and forth in the late '60s before settling down to an average 7800 turns, which gave a resistance of 6.5k to 7.3k Ohms.
After 1981, Fender switched back to old resistance value (between 7.3k and 8.1k Ohms).
​

For this reason, the white cotton string that protect the bridge pickup today is often darkened with dust and dirt.  ​Both bridge and neck pickup were lacquered, but only the bridge unit was wax potted.
​Since March 1964, Fender started to gradually replace the black bottom pickups with the new grey bottom units, characterized by a grey bottom plate, at first light grey and slightly darker after 1968.  Grey bottom units finally replaced the black bottom pickups at the end of 1967. However, in the '70s, a few black bottom single coil pickups were used by Fender, because, in order to run out of stock, undated pickups with black fiber bottom plates were made.
The windings of the new pickups were burgundy color due to the new insulating coating, plain enamel.
Unlike the black bottom units, gray bottoms were not always wax potted, but they were lacquer potted.  This process had to be done during the winding as the lacquer did not penetrate deeply into the coils.  In the '70s, the lacquer potting was sometimes done too late (or it was not done at all), and the result was the production of microphonic pickups.  For a long time it was not possible to understand the nature of this problem, which was solved only in late 1981 thanks to Dan Smith, who resumed the wax-dipping procedure.  Since black bottom pickups were not dipped in paraffin wax, the white cotton string that protect the bridge pickup is much cleaner on the late ‘60s black bottom pickups than on grey bottom pickups.

The sound produced was brighter and the resistance of about 10kOhms guaranteed a higher output.

In early 1964 Fender started to date the bottom plate of most of its pickup's bobbins.  However, Telecaster's neck pickups were not usually dated because of their too narrow bottom with protruding magnets.  Hence, only the bridge pickup was likely to feature any date, but it is not easy to see it because of the shielding plate.

During the '60s and '70s, three different types of markings were thus successively applied:
It's should be noted that the code was stamped when the pickup was finished and stored, and therefore there was often a gap of a couple of weeks or months with the assembling date!