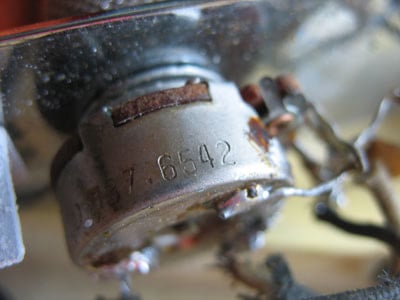 Esquires, Broadcasters and Telecasters were equipped with full shaft (a.k.a. solid shaft) potentiometers.  Indeed, their metal knobs had a small set screw, which was well tightened against the pot's solid shaft to fix the knob.
Leo Fender used CTS (Chicago Telephone Supply) potentiometers between 1949 and early 1950.  The snakehead and the second prototype, as well as pre-production guitars, were equipped with CTS pots.
In the spring of 1950 Leo Fender placed an order for Stackpole potentiometers, which were the standard on Telecaster-style guitars during second half of 1950 throughout 1951.
In early 1952, Fender replaced Stackpole with Clarostat pots, recognizable by their blue and black ink codes, which were used until late 1953.
In 1954 Fender switched back to Stackpole, although a few Centralab pots could be used in 1954.  Starting from 1963, CTS pots were used the most.
Since 1972 it has been possible, on order, to ground potentiometers and the switch by means of black plastic coated wires.

How to date Fender pots

Potentiometers used by Fender were stamped (or inked) onto the back or sides of the pot with numbered codes which usually could give information about date of production, manufacturer and resistance values.
Pot’s codes were composed by the manufacturer code, followed by numbers which indicate week and year of production:
MMMYWW in the ‘50s
MMMYYWW since the ‘60s
Where “Y” indicates the last digit(s) of the year of production and “W” the week, whilst MMM indicates the manufacturer:
“137” = CTS,
“304” = Stackpole,
“140” = Clarostat,
“013” = Centralab,
Unfortunately, these codes can be faded, worn, or obscured by solder and other components.
This code is not to be confused with the part reference numbers frequently stamped on the pot by the manufacturer for inventory purposes. For example, the full pot marking “021357 250K A 1376612” can be read:
“021357 250K” = the part number for a 250K audio pot
“1376642” = the dating code (CTS 12nd week of 1966)
Pot dates can be a useful tool in dating guitars, but it is important to keep in mind that this is the date that the potentiometer was produced, although they can give an idea of when the guitar was built.  Fender sometimes took a very long time to use the potentiometer in question, and they may be considerably older than the guitar itself.  For example in 1966 Fender bought a huge amount of CTS pots and took five years to use them all.  It should be also considered that potentiometers in an older guitar may have been replaced.​