The end of Cbs era and the FMIC 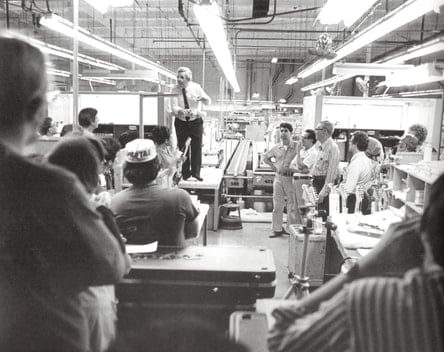 1985 buyout and Bill Schultz at the head of Fender

Bill Schultz regularly visited the production line to rally the troops (Courtesy of Fender)
The heavy crisis that hit the music industry in the early '80s prompted CBS to finally give up and sell Fender. But what would happen now to the company created by Leo?  Some possible buyers would have moved the entire production line outside the United States; others would have preferred to reduce Fender to a simple import and promotion company, cutting the number of employees to a handful of men.  These potential outcomes were so frustrating for all those who had dedicated their lives to Fender and had worked in its plants for many years, that a large number of people felt the need to organize to avoid a new collapse.
The first of February 1985 Bill Schultz announced at NAMM Winter Convention that a group of around ten Fender employees, supported by some investors, including Servco Pacific Inc., Hawaii’s largest privately held company, engaged in automotive distribution & retail, car sharing, and capital investments, FootHill Savings & Loans bank, the Chicago investment company Mesirow and a musician, probably Tommy Tedesco, was going to buy the company. Schultz would remain at the head of Fender but would report to his colleagues and to the investors and no longer to CBS.
The purchase was formalized on March 12, 1985, for about $12.5 million.  At the same time, the company was re-named to its present-day name, Fender Musical Instruments Corporation (FMIC).
Fender’s future hung in the balance as there was no USA manufacture due to the CBS intention to humiliate Fender by disposing of the biggest guitar and amp brand in the world for the same price in 1985 that it paid for it in 1965, almost exactly 20 years later, considering that the Fullerton factory wasn’t included in the deal!  But Dan Smith and Bill Schultz were determined that this new beginning for the illustrious brand, the Post-CBS era, would be a return in prestige and quality.
Dan Smith, referring to the new adventure, declared: “Scary but exciting. We're not going to be in the position to be able to make any mistakes.  There'll be nobody behind us with a big cheque-book if we have a bad month”.
Agreement concluded, Schultz reassured everyone that Fender products would still be made in US and Japan, contrary to what many claimed.  However, since it hadn’t been possible to buy Fullerton factories because they were too expensive, the headquarters would be moved to Brea, a few miles away from Fullerton, and the production to the new Corona plant, much smaller than the Fullerton ones.  This new factory would not be ready before October 1985, and therefore for about eight months Fender didn’t produce any guitars in the United States and sold only “Made in Japan” guitars and stock leftovers - maybe a few boxes of necks and bodies, but nothing justifying the amazing fantasy stories you read.
In these first difficult post-CBS years during which Fender was completely renewed, becoming a very different company from the one built by Leo, Japan supported the company not only producing lots of guitars for the American market (Standard, Reissue and Squier), but also contributing to the Stratocaster’s evolution by introducing small innovations in line with the growing use of the tremolo bar and with the trend toward rock music excess.  Thus began the era of the Superstrats: the  Contemporary Series and the H.M. Series.
​​ 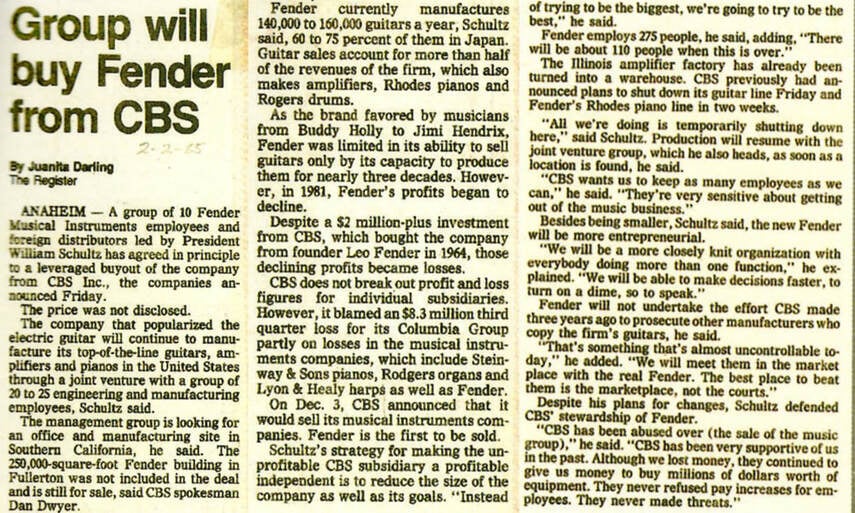 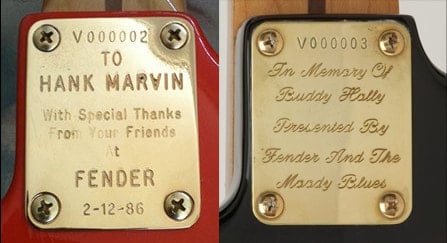 At first the small Corona plant could produce only between seven and ten guitars a day, all reissue Vintage Stratocasters.  The first two Stratocasters fabricated in the new factory were two Fiesta Red reissues: the first one (S/N V000001) was owned by Dan Smith, the second (S/N V000002) was the one showed to Hank Marvin at a party organized by John Hill in 1986 to celebrate great moments in Fender history.  The third (S/N V000003) was a commemorative reproduction of the two-tone sunburst Stratocaster used by Holly and sported a brass neck plate engraved with "In Memory of Buddy Holly Presented by Fender and The Moody Blues".  This guitar was presented directly to Buddy's widow, Maria Elena Holly.
As established by the new owners, only the reissues would be built in America, while the other guitars, Standard Stratocaster included, would be imported from Japan.
In October 1985 George Blanda was hired to set up a small Custom Shop, a project which was, however, postponed due to the increase in the value of the yen against the dollar which made the import of guitars from Japan less convenient and forced Fender to revise its plans.  This new economic balance and a strong patriotic spirit prompted Dan Smith and George Blanda to create a new “Made in USA” Stratocaster line, called American Standard, launched in 1987.  Until this date, the only Stratocasters available in the "post-CBS" era were therefore the Japanese and the Vintage series.  However, the Corona plant gradually began to produce new models: the Plus Series and the first Signatures, including the Eric Clapton and the Yngwie Malmsteen models.
1987 was a memorable year for the company also because it coincided with the birth of the Custom Shop where Michael Stevens and John Page initially collaborated.  In addition, the brand Squier was moved to Korea and Fender opened its first Mexican factory in Ensenada, Baja California; the first Mexican Stratocaster, however, was to be built only a few years later.  This plant was enlarged after a big fire hit it in 1994.
The Stratocaster Vintage Plus must be mentioned too, in essence a reissue with the same electronics as the Elite and with a Tremolo System III unit, of which two prototypes were introduced at 1986 NAMM, but that never went into production.

July 1984
CBS is looking to sell Fender (actually all of its musical instrument holdings) so they start laying people off by seniority in the Fullerton factory.

Second half of 1984
Layoffs are now impacting production levels.

December 1984
CBS brings back a QC team as temps to evaluate the product sitting in their warehouse - adding that locking nut deal they had to some of the Elite Strats and making sure the stock was properly set up.

January 1985
Some assembly happens, the QC team is back as temps to get the display instruments ready for NAMM.

Early February 1985
CBS sells Fender to a group of investors put together by Fender CEO Bill Schultz. The new group, Fender Musical Instruments Company (or FMIC) did not buy the Fullerton factory; the initial purchase was only the name, intellectual property, and some parts, etc.

February 1985
FMIC leases space in the Fullerton factory from CBS - space for business offices, warehouse space, the QC/Warranty/Setup area. This gives them a place to be until they can find their own space. FMIC's plans are to have a very small USA production - just the Vintage reissues with the intention to develop a high-end model to compete with Schecters, etc.; FMIC starts buying up tools, workbenches, tooling and machinery from CBS, paying storage fees to keep them at Fullerton until they can relocate. FMIC continues employing the QC/Warranty/Setup team as temps - now doing inspections/setups of the MIJ product.

Mid-June 1985
The team of temps now starts packing up their workbenches, tools, etc. in preparation for the move to FMIC's new facilities - business offices in Brea, CA and production in Corona CA.

July 1985
FMIC moves out of the Fullerton to their new facilities. After the team of temps unpacks the workbenches they are re-hired as the first non-management/non-sales employees of FMIC. FMIC then begins staffing the rest of the production floor, rehiring as many former employees as they can.

October 1985
Actual production starts again at USA Fender; but very low output.
There was again minimal production by FMIC of Vintage reissues from October-December 1985. Assuming they made 15 per day (as stated in The Stratocaster Chronicles book), 5 days a week, probably 11 weeks of production that would have been around 800 instruments made by FMIC in 1985.
Antonio Calvosa