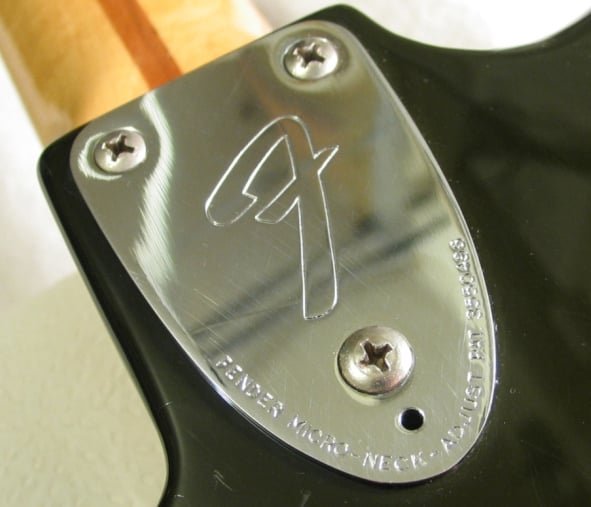 The first 4-bolt neck plates were plain.  As early as June 1954, Fender started to stamp the serial number on the neck plate and, in mid-1965, a large "F" was added.

By then, Fender would have had to deal with two methods of installation of the truss rod, from the front and from the rear.  In order to optimize production, only the installation from the rear was retained, and this is why '70s rosewood-capped necks featured the skunk stripe.

In late 1971 CBS replaced the neck shim and the 4-bolt neck plate respectively with the new micro tilt system and the 3-bolt neck plate.
The metal disk at the base of the neck was initially housed in a route which surrounded it perfectly. Since ca. 1976, the route was lengthened to reach the end of the neck.
Despite these changes, the truss-rod was still inserted from the rear and this explains the presence of the stripe.
In 1979, with the introduction of the 25th Anniversary Stratocaster, Fender came back to the vintage style truss rod and 4-bolt neck plate.  The 1980 Strat, the Walnut Strat, and the mid-1981 Gold Stratocaster, as well as the late 1981 Standard Stratocaster (a.k.a. Smith Strat), were also fitted with the vintage style truss rod and the 4-bolt neck plate.  And probably it was used also on a few 1981 "Sahara Taupe" (one of the International Color) finished Stratocasters.
The new Bi-Flex Truss Rod was first introduced in mid-1983 on the Elite and the Standard Stratocaster (a.k.a. “2-Knob Stratocaster”).  The neck angle could be adjusted in both concave and convex directions via a smaller wrench inserted into the truss rod adjustment hold placed at the nut.  At the same time the micro-tilt was re-introduced, but this time with a 4-bolt neck plate.

Biflex Truss Rod section
The 1987 American Standard Stratocaster still featured the micro tilt and the 4-bolt neck plate, although it was stamped with the word “Fender” only.  The same neck plate was also used on all the other US factory models (Strat Plus, Strat Plus Deluxe, Roadhouse Strat, Lone Star Strat, Big Apple Strat), except for the Strat Ultra, which had its own neck plate.
In 1998, the new American Deluxe Stratocaster featured a new neck plate stamped with “Fender CORONA, CALIFORNIA”.  Since this moment on, all the left-over neck plates were used on the American Standard Strats, after which they were fitted with the same neck plate used on the American Deluxe Series.