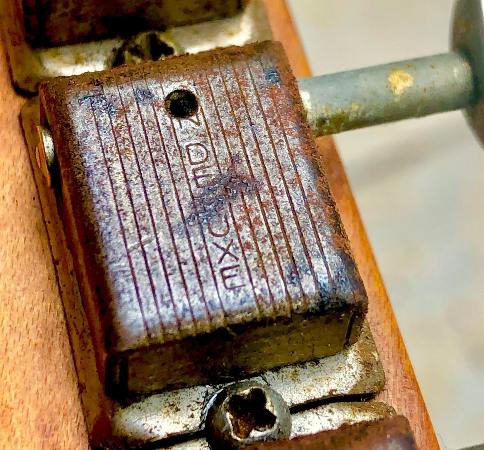 The original Kluson tuning machines can be distinguished from some reproductions by their “DELUXE” marking, which was entirely stamped on the outer shell, whilst some reproductions featured the second “E” wrapped around to the side.  The position of the hole of the lubricant can be also different.
​

When CBS bought Fender, one of the first things Don Randall wanted to do was to make their own tuning machines, thus avoiding buying the Klusons.  Forrest White stated in his book that he had the idea of the design of new keys that would be mounted easily on the six-in-a-row headstock with the use of two screws.
According to Forrest, Fender bought West German gear-hobbing machines to make the gears for the keys they wanted to make.  The gear-hobbing machines were set up in Race and Olmsted’s Tool & Die shop, which made the parts for Fender because the machines had to be operated by trained machinists, and Fender didn’t have employees with that particular skill.  Forrest also claimed that Schaller, the German company, copied his design in making some of their keys – although a few former Fender employees remember they were supplied by Schaller and shipped from Germany in the typical Schaller orange boxes.
Regardless of how things went, Kluson tuners were gradually discontinued and replaced by the so-called Fender keys in the course of 1967, characterized by an octagonal chrome-plated plastic button and the “F” (for Fender) marking stamped on the back of the cover.
These tuning machines were slightly modified over time.  At first, they were characterized by a side tuner shaft worm gear hole, but since circa 1975 they gradually switched to a closed shell, without a protruding shaft.  Although designed in Fullerton, the gear inside the shell of the Fender keys second issue was stamped with “MADE IN W. GERMANY”.
Fender used this type of key on most Stratocasters until 1983.

Since the Kluson company went out of business, the Vintage Reissue Stratocasters were fitted with Kluson-style replicas made by the Japanese Gotoh company.  Kluson brand was purchased in 1993 by Larry Davis of WD Music Products.
The 1979 25th Anniversary Stratocaster was fitted, at first, with the not-slotted Sperzel Non-Locking Tuners (the locking tuners were introduced by Sperzel only in 1983), which featured the word “Fender” stamped on the back shell. The reason why Fender later equipped this Stratocaster with the same Schaller tuning machines used for the Strat is not known. ​
The 1980 Strat featured the not-slotted Deluxe Schaller Keys, which ported the brand name “Fender” stamped on the back shell. Although the hardware of the Strat was gold-plated, the tuning machines of the first Strat units were chrome-plated probably due a delay in refilling the gold-plated keys.
The 1983 Standard Stratocaster (a.k.a. 2-Knob Stratocaster) and the American Standard Stratocaster, unveiled in 1987, were both fitted with the new version of the not-slotted Deluxe Schaller Keys.
The American Series Stratocaster and the second and the third American Standard Series featured the new Fender/Schaller Deluxe Staggered Cast/Sealed tuning machines, which were recognizable by their staggered string posts.  Indeed, the first four tuning key posts (treble E, A, D and G) were lower in height than the other two (B and bass E) - they were staggered - which provided a sharper angle where the strings went over the nut, thus ensuring more tension and greater sustain.