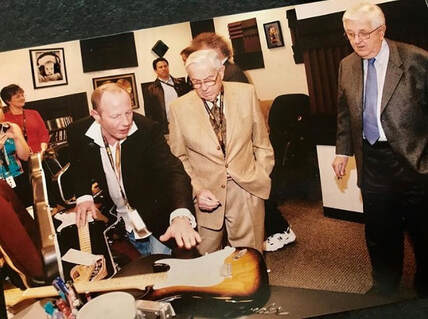 50 years of Stratocaster.  If you look back, all the changes that the guitar has undergone over the years catch the eyes. From a single model with a few additional options (on request) to an unimaginable quantity of guitars, all Stratocasters, which differed only in small details, so as to satisfy the needs of the guitarists from all over the world. And if the desired guitar wasn’t in the catalog, the Custom Shop, the dream factory, would build a custom guitar.
In an interview in 2004 during which Dan Smith was asked what his job was at Fender, he answered: “It's to protect the past, carry on the tradition, and make a future for Fender.  That means improvement.  If Leo were here today, he wouldn't want it any other way, because he was constantly trying to make a better product, pushing the envelope.  He never stopped. Neither do we.”   And Bill Schultz remembered Leo Fender: “We wouldn't not be here if weren't for Leo Fender. We never forget that. [...] We try to emulate his philosophy and his principles by building instruments with the same passion that the players bring to them. [...] We are disciples of Leo.”

The concert for the 50th anniversary of Fender Stratocaster at Wembley Arena, 2005 Fender Frontline
To celebrate in style the indisputable importance of this instrument, on September 24, 2004, Fender organized a concert in London at the Wembley Stadium in which Fender musicians like Hank Marvin, David Gilmour and Ronnie Wood took part, and also other musicians who had little to do with the Stratocaster, like Joe Walsh of the Eagles, Amy Winehouse, Paul Rodgers, Theresa Andersson and Jamie Cullum.  The most important moments of the concert were the performance of Gary Moore who, with his red Stratocaster, played an unforgettable Red House’s version, and that of David Gilmour, who showed up with his Stratocaster with serial number "0001".   Certainly, given the date on the neck (June 1954) and that on the body (September 1954), it wasn’t the first Stratocaster ever made, but a very beautiful guitar of the first year of production for sure.
To celebrate the anniversary of its most important guitar Fender mounted a commemorative neck plate on all its factory Stratocasters and built, as they had in the past, some Anniversary models.

Anniversary Stratocasters made in U.S.A.

Don Randall and Bill Schultz, May 2004, during the celebration of the 50th Anniversary of the Stratocaster (Courtesy of Michael Bedilion)
In 2004 the Custom Shop worked on a beautiful replica of 1954 Stratocaster: the​ 50th Anniversary 1954 Stratocaster.
The project was driven by master builder Chris Fleming in collaboration with George Blanda of the Research & Development department and was inspired by the 1954 Stratocaster of another master builder, Richard Smith.  That Stratocaster was already used a decade earlier for the creation of the Stratocaster of the 40th anniversary and would be utilized later in the Pure Vintage project.
This guitar, serial number 0100, was completely dismantled and analyzed to reproduce, as well as possible, the constructive techniques of that period.  The same materials employed in 1954 were used, included an ash body in two asymmetric pieces painted with a Closet Classic nitrocellulose finish, slightly aged 2-Color Sunburst, a maple neck and plastics reminiscent, in their materials and appearances, of those of Leo’s guitar.  The reproductions of the vintage pickups, three Vintage 1954 single coils, were curated by the celebrated Abigail Ybarra.  These single coils were characterized by Alnico III magnets, formvar copper wire and ABS covers.  Fender even recruited an old worker from Leo's time, Roger Centeno, to engrave each back plate with the machinery of the time.
At the same time, Fender inaugurated the ​​50th Anniversary American Deluxe Stratocaster for the Deluxe Series, built according to the highest quality standards, both for the materials and for the production methods utilized.  For the body was chosen the best alder body available in the Corona plant, finished in a nice 2-Tone Sunburst, and a Modern “C” shaped maple neck.  Other characteristics of this Stratocaster were the three Fender Samarium Cobalt Noiseless single coils, the S-1 switch, the Deluxe 2 pivot bridge with pop-in arm, 3-ply pickguard with commemorative logo, aged plastics, abalone fret-markers, deluxe tuning machines, anniversary neck plate and gold plated hardware.
The American Series celebrated the anniversary with the ​50th Anniversary American Stratocaster.  It featured an ash body (unlike the alder of the American Deluxe) with a polyurethane 2-Color sunburst finish, maple neck, 1-ply eleven screws pickguard (unlike that of the American Series which was 3-ply) and commemorative neck plate.  It was equipped with the same Vintage ’54 pickups used in the Custom Shop model, while the 2-Point Tremolo, the custom staggered tuning machines, 9.5" radius and the medium jumbo frets added a touch of modernity.
The Anniversary model of the Custom Shop was sold together with a replica of the first Fender cases, while those American Deluxe and American Series with a special tweed case with the anniversary logo embroidered inside.
The “normal” American and American Deluxe Stratocasters were equipped with commemorative neck plate.

Ensenada and the 50th anniversary